Diaz, Chavez at pivotal point of their careers 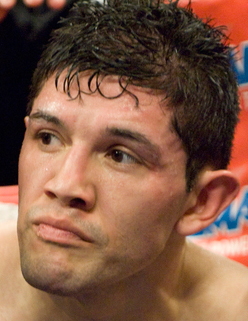 David Diaz and Jesus Chavez will meet Saturday in Chicago in a fight that will be as revealing as it is entertaining, the latter of which we expect from two brawlers.

They both are coming off brutal losses, Diaz to Manny Pacquiao in June of last year and Chavez to Michael Katsidis in April. They were the kind of losses that set a fighter back a great deal, which was the case here.

On Saturday, the Chicago products have the chance to prove in front of their hometown fans that they can still fight on an elite level.

“I think people tend to forget real quick about the past when someone loses,” said Diaz, who also could’ve been speaking for Chavez. “I’ve been through a lot, done a lot. I was a champion. Now it’s time to get back up there and do it again, to climb back up that ladder.”

Diaz (34-2-1, 17 knockouts) was the first of three opponents to suffer spectacular knockout losses over an unforgettable 10-month period against Pacquiao, who later stopped Oscar De La Hoya and Ricky Hatton.

The sturdy veteran put up a game effort against the pound-for-pound king but was broken down by a better — and much faster — opponent. Pacquiao ended it with a straight left that sent Diaz face first to the canvas. The ref didn’t even count.

Of course, Diaz was devastated. He had beaten Erik Morales to win a share of the lightweight title and was on a roll. Then the fists of Pacquiao changed everything, leaving him profoundly disappointed.

Time and Pacquiao’s subsequent performances eased the pain , though.

“At the time, I saw him as a guy trying to move up in weight and take me out,” he said over the phone a few hours before the weigh-in Friday. “That was my attitude going into the fight. After the fight, after watching what he did to De La Hoya and Hatton, I realized I lost to a pretty amazing fighter. And I did OK with him.

“ÔÇª That helped me come to terms with it. It’s part of my profession. You try to win. Sometimes it works out, sometimes it doesn’t.”

Diaz, 33, said he hasn’t fought since then because of knee problems. He had surgery to remove bone chips from one last fall but, because the knee felt good, he didn’t go through proper rehabilitation and had subsequent problems.

Now, he said both the knee and he feel good. He’s eager to show everyone that Pacquiao beat a good fighter, one who had lost only once before (to Kendall Holt) and one capable of regaining a major title.

“I understand that you’re only as good as your last fight,” he said. “That’s the way it is. The thing about me is that I get that. I also have to learn from my mistakes. If you don’t, it’s time to get out of the sport. I want to go out Saturday and show what I learned from the loss.

“Hopefully, I’ll be a better fighter and work my way back to a championship.”

The loss suffered by Chavez (44-5, 30 KOs) in Austin, Texas, probably was more physically damaging than Diaz’s loss to Pacquiao.

Chavez and Katsidis, also a brawler, exchanged hard, painful punches at a furious rate until Chavez began to wear down, at which time the Australian landed an increasing number of wicked blows. After the seventh round, with Chavez spent, his corner stopped the fight.

Chavez had nothing left, in the fight and possibly in his career. The 36-year-old Mexican national, who grew up in the U.S., was contemplating retirement but couldn’t resist an offer to fight a fellow Chicagoan in their hometown.

“I had my mind made up after (the Katsidis) fight based on how I felt,” said Chavez, referring to his decision to retire. “They made me an offer, though. I thought about it carefully and said, ‘Well, why not? It’s a good fight.

“I guess the fact that my body healed up, that I felt strong, made me want to take another fight.”

Unlike Diaz, Chavez is approaching this fight as a gauge. If he wins, he’ll look forward to the next step. If he loses, that’s it.

“I’ll be 37 in November,” he said. “One fight at a time sounds good. That’s how I look at this fight. It’s just a one-fight deal. I love boxing. It’s difficult to walk away after a loss but it’ll be difficult to walk away period, win or lose. I still have that will to fight but I don’t want to be looked at as a guy who stayed too long.

We’ll learn a lot about both fighters on Saturday.