Huerta bounces back on FNC card 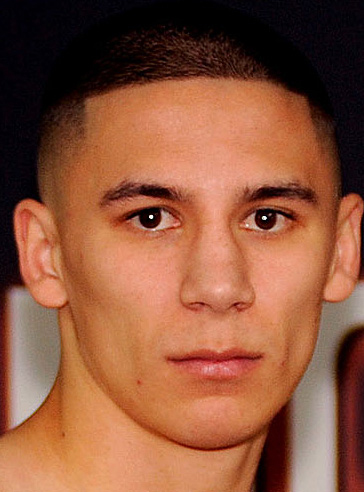 Charles Huerta got back to winning but he had to work for it.

Huerta, who was knocked out by Derrick Wilson with a single left hook on the July 30 Fight Night Club card, scored a unanimous decision over veteran journeyman Rodrigo Aranda on Thursday night at Club Nokia in Los Angeles.

The judges scored it 59-54, 58-55 and 57-56, which includes a point deduction against Arranda for hitting behind the head. That means the third judge, James Jen Kin, had it three rounds apiece.

And that wasn’t far-fetched.

Aranda’s record (8-10-2, 2 knockouts) might lead one to believe that he is a pushover. That isn’t the case. He’s a journeyman – but a good, well-conditioned journeyman who comes to fight.

Unlike the Wilson fight, when Huerta aggressively went for a knockout, he fought patiently against Aranda. He waited for openings and then pounced when he saw them.

“You guys got to see a little boxing,” he said with a smile.

Huerta won the fight because he consistently landed the cleaner and harder punches. He landed some particularly hard shots after finding his range in the final rounds, although Aranda never stopped coming.

Huerta (12-1, 7 KOs) doesn’t care how he won, particularly after the way his last fight ended.

“I felt great,” he said. “I was here for the August card and wanted to get right back into the ring then. Once I was in there, all my problems went away. I felt like it was my pro debut again.

“I'm happy to get back into the win column again and get some good rounds in.”

Favela (16-21-6, 9 KOs) won’t impressive anyone with his record but the Mexican is aggressive and extremely resilient, having been stopped only once in his career against some very good fighters.

Ramos learned how resilient Favela is on Thursday, landing many hard shots but never hurting his opponent. The Santa Ana, Calif., fighter, clearly the more-polished of the two, did his damage on the scorecards by controlling the fight with his jab and outworking his opponent.

He was pleased afterward.

“I know these are the kind of guys I have to beat to get where I'm going,” Ramos said. “I know their records aren't perfect but they can take a lot of shots.

“These kind of fights will help me in the long run.”

Ronny Rios made it two for two on Fight Night Club cards in spectacular – and quick — fashion. The Santa Ana, Calif., prospect put journeyman Manuel Sarabia down and out with a straight right only 38 seconds into a scheduled four-round featherweight.

Rios (7-0, 3 KOs), who outpointed Aranda in a four-round bout in July, went after Sarabia (16-30-9, 10 KOs) from the opening bell, landing several hard punches in the opening seconds. However, the right hand ended it instantly, putting Sarabia on his pants and hurting him badly.

The dazed Mexican fighter shook his head, apparently trying to gather his senses, but never tried to stand up and was counted out.

In a scheduled four-round lightweight bout, Eric Godoy of East Los Angeles stopped Javier Solis of Oxnard, Calif., at 2:22 of the second round.

Godoy, making his pro debut, put Solis (0-3) down with a right hook and hurt him in the first round and then battered his game, but overmatched opponent for much of the second round, prompting the referee to stop it.

Sandoval decked Martinez with a devastating left hook, prompted the referee to stop it immediately.

And, in the final bout, Art Hovanessian (9-0-1, 4 KOs) of Glendale, Calif., stopped Baudel Cardenas (18-19-2, 6 KOs) of Mexico in the fifth round of a scheduled six-round junior welterweight bout.