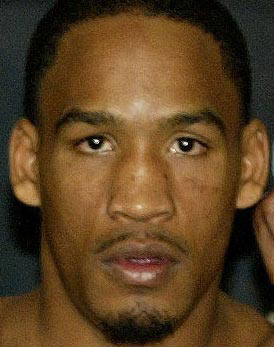 Most fans and boxing writers consider Luis Ramos to be the most talented of the young fighters showcased on Golden Boy Promotions’ Fight Night Club series.

In his first two appearances on the monthly club show from Club Nokia in downtown Los Angeles, the lightweight prospect displayed the physical tools, technique, and versatility that would suggest a very promising pro career.

Ramos (12-0, 7 knockouts) even displayed a solid chin when he took a few flush shots from heavy handed veteran Sandro Marcos in his last FNC appearance in July.

Ramos survived the rough spots and stopped Marcos just as he outclassed and wore down Baudel Cardenas to an impressive fifth-round KO in the premiere FNC, which is why his opponent for Thursday’s show — Cristian Favela — is a bit of a letdown to boxing insiders.

Ramos is in the six-round main event of the Versus-televised show (which is also broadcast live on RingTV.com) and most fans and insiders were hoping to see the 21-year-old southpaw tested by a fighter with a better win-loss ratio than Favela (17-21-6, 9 KOs).

Favela should not be considered an easy outing by any stretch of the imagination, especially for a fighter as young and inexperienced as Ramos. The 29-year-old native of Los Mochis, Mexico has gone the distance with numerous world-class fighters, including current titleholders Steven Luevano and Roman Martinez; and he’s only been stopped once in 44 pro bouts.

The matchmakers at Golden Boy Promotions, Eric Gomez and Roberto Diaz, had hoped for a step up in competition for Ramos’ third FNC appearance. They wanted a fighter who was just as rugged and experienced as Cardenas and Marcos but better skilled and with a winning record.

They thought they found their man in Juan Ramon Cruz (16-6-1, 12 KOs), a 31-year-old boxer-puncher from Puerto Rico who had made a few appearances on Telefutura’s now-defunct “Solo Boxeo” series.

Cruz was competitive in losing 10-round decisions to Mexican veterans Miguel Huerta, who he dropped, and Fernando Trejo. However, he never signed the contract to face Ramos.

“I’m not sure why the Cruz fight didn’t come off,” said Ramos’ trainer Hector Lopez. “I think he wanted more money. We signed on our end. We knew Cruz has power and good experience but we felt we were ready for the challenge.

“I’ll be honest, I was more excited about Luis fighting Cruz than I am for Favela. It’s nothing against Favela it’s just that I know that Luis would get more credit for beating a guy with a 16-6 record than a guy with a 17-21 record.”

Gomez and Diaz almost replaced Cruz with Ramon Montano (17-7-2), the 27-year-old spoiler who gave David Diaz a good 10-round fight when the Chicagoan was still a lightweight titleholder and held Dmitriy Salita to an eight-round draw after dropping the 140-pound prospect twice in the first round of an eight rounder that many observers thought he won.

However, Montano was making a good weekly wage as a sparring partner for Floyd Mayweather Jr. and did not want to break camp for a six-round fight.

So Favela it will be for Ramos, who says he doesn’t view the L.A. resident as a “journeyman”.

“Favela’s a tough opponent,” Ramos said. “I don’t take anyone lightly and I’m not going to judge him by his record. My last two opponents had losing records but they were the toughest guys I’ve ever fought.

“Favela has gone 10 to 12 rounds more times than I have fights. He’s gone the championship distance with David Diaz and other good fighters. There’s nothing easy about Favela.”

“Favela is one of those Mexican tough guys who didn’t have an amateur career so he doesn’t have the technique or boxing ability of Luis, but he knows how to be difficult to better-skilled fighters,” Lopez said. “He’s a short, rugged guy who wants to get inside where he can disrupt a better boxer’s rhythm. He knows how to frustrate you.”

Ramos normally trains at the TKO Boxing Club in Santa Ana, Calif., where he was born and raised, but he spent two weeks at Hollywood’s Wild Card gym sparring with veteran lightweight Ricky Quiles and a week at the Maywood Boxing Club sparring with former 135-pound contender Jose Armando Santa Cruz in preparation for Thursday’s fight.

“Quiles gave us good work,” Lopez said. “He’s got the experience and craftiness we can expect from Favela. Santa Cruz probably weighs 160 pounds right now and he threw that giant, gangly body at Luis for the 12 rounds we sparred with him. He came at Luis from all kind of crazy angles, which was good. I want Luis to be ready for anything.”

Most of all, Lopez wants his young fighter to box a patient fight.

Ramos was brilliant in systematically picking apart Cardenas for four rounds before blasting the young journeyman with a right hook in the fifth round of his FNC debut.

However, in his next FNC appearance, against Marcos, Ramos appeared to be looking for the knockout and his aggression walked him into a couple of big right hands that momentarily stiffened his legs.

Ramos says it was a rookie mistake that he won’t repeat against Favela.

“I was able to figure out Cardenas early,” Ramos said, “but against Marcos I just decided to let my hands go to see what would happen. I wanted to trade with him to see what he had.

“I felt it when he caught me with those shots. It was a strange, almost kind of fun feeling, but it reminded me to be more careful. I’m not going to lose my head like that with Favela.

“I’ve been studying him with Hector, and I’m going to follow Hector’s game plan when I fight him. I’ve gotten to 12-0 by following Hector’s strategy, so I’m going to keep doing it.”

“Just because I’m going be careful and take my time doesn’t mean I’m not going to throw hard punches,” Ramos said. “If Hector and I see that Favela’s getting hurt and it looks like I can put him down, he’s going to tell me take him out and I’m going to do my best to do just that.”