Marquez is used to beating the odds 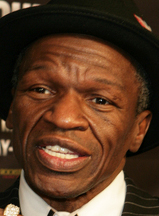 LAS VEGAS — It’s hard for most of us to envision Juan Manuel Marquez overcoming the many physical advantages Floyd Mayweather Jr. holds over him. The odds reflect our skepticism.

As of Wednesday, the race and sportsbook at the MGM Grand, the site of Saturday’s fight, listed Mayweather at -420 and Marquez at +340.

However, before we write off Marquez completely, we would do well to remember the man’s character and consider how important this fight is to him and his country.

We should keep in mind how very special Marquez is.

If he weren’t special, I wouldn’t be writing this column about him.

He wouldn’t be a three-division champ with late-career victories over fellow veterans Marco Antonio Barrera and Joel Casamayor or young guns Juan Diaz and Rocky Juarez.

He wouldn’t be Manny Pacquiao’s chief rival, and he wouldn’t be near the top of everyone’s pound-for-pound list.

He wouldn’t be fighting Mayweather this Saturday, and he wouldn’t be in position to become one of Mexico’s all-time boxing legends.

If Marquez didn’t have a warrior’s heart to match his skill and technique, if he didn’t possess uncommon desire and dedication to the sport — if he wasn’t truly special — he would have faded away after an ill-advised trip to Indonesia resulted in a unanimous-decision loss to national hero Chris John.

At that point in his career, Marquez was nothing more than a cautionary tale for young fighters, an example of poor management, a victim of boxing politics, the sport’s latest and saddest “could-have-been”.

But somehow, he managed to pull himself out of that hole. He has gone 6-1 (the one loss a disputed split decision to Pacquiao in their hotly contested rematch last March) since that potentially career-wrecking setback.

And here he is, in the biggest fight of his career. A 3¾-to-1 underdog against Mayweather.

But if Marquez’s amazing 3¾-year journey taught us anything, it’s that he shouldn’t be counted out no matter how high the odds are stacked against him.

It’s something we should have learned after his first bout with Pacquiao, a fight that by all rights should have been over in the first round.

Too many small-minded fans squabbled over how that first round was scored and who should have won the bout by a point or two. Those poor fools were so caught up in results and post-fight bragging rights that they missed what Marquez did that night.

If he had merely survived the opening round and lasted a few more before being stopped, that would have been a feat worth applauding. The fact that he not only picked himself up off the canvas three times but got his head together quickly enough to solve Pacquiao’s explosive style midway through the second round is a profile in courage and composure.

That he was able to contain and outbox the southpaw dynamo for the majority of rounds to the final bell and salvage a draw was nothing short of miraculous.

The bottom line on Marquez is that all he needs is one opening, one break, one opportunity to exploit and he will make the most of it.

He did it when referee Joe Cortez allowed him to get up from the third knockdown in the first Pacquiao fight.

He did it when Golden Boy Promotions signed him and made the fight with Barrera.

He did it when Casamayor dropped his guard in the 10th and 11th rounds of their evenly contested lightweight title bout last September.

He did it when Diaz slowed down after getting cut in their barnburner in February.

Mayweather is the favorite in Saturday’s fight, and he should be.

But if “Money” doesn’t box a perfect fight, if he hurts one or both of his fragile hands, if he aggravates his rib injury or if he just has a bad night, he can count on Marquez making the most of his opportunity.

And what if Marquez does shock the boxing world? How big would that victory be for Mexican boxing? Where would it rate among all-time great victories scored by Mexican boxers?

“If Marquez beats Mayweather, it would be huge in Mexico,” said Salvador Rodriguez, a boxing writer covering Saturday’s fight for Mexico City’s Diaro Deportivo Record. “It would mean as much to the Mexican people as when Salvador Sanchez beat Danny Lopez and Wilfredo Gomez.

“The Gomez fight was a big one for Mexico. Gomez had never lost. He was considered to be the best fighter, pound for pound, and he had beaten many Mexican fighters, including Carlos Zarate. He was favored to beat Sanchez. That made the victory sweeter for Mexicans.

“The sweetest win for Mexicans so far was when Julio Cesar Chavez beat Meldrick Taylor in their first fight.”

“That fight was wonderful for me,” he said after the final press conference on Wednesday. “Chavez was my idol. He fought the best fighters of his time.”

At Monday’s public workout in L.A., Marquez said beating Mayweather would be comparable to Chavez’s victories over Taylor and Hector Camacho.

Mayweather’s athletic talent and style is almost a combination of those two Chavez victims. Mexican fans are well aware of this. They are passionate fans but they are also knowledgeable. They know Marquez has his work cut out for him.

“Mayweather is probably better than Taylor was when he fought Chavez,” Rodriguez said. “He’s closer to his prime than Camacho was. We know how good he is. That’s why if Marquez beats him, it might be the most satisfying win for Mexican fans ever.

“Part of the reason is that Mexican fans don’t like guys who trash talk, and Mayweather does a lot of that. 24/7 has been shown on Televisa (Mexico’s biggest network) so a lot of people are aware of this fight, and they don’t like Mayweather’s attitude. They hate him for all of his ‘blah, blah, blah.'”

Televisa isn’t only showing HBO’s 24/7; the network also is broadcasting the fight to the entire country on a two-hour delay Saturday.

For years big fights have been shown only on a pay-per-view basis in Mexico, limiting the audiences for such high-interest showdowns as Chavez’s two bouts with Oscar De La Hoya and the Morales-Pacquiao trilogy. Mayweather-Marquez will reach a much wider audience thanks to Televisa, which sent a 22-person production crew to Las Vegas to cover the fight.

“Marquez’s fight with Mayweather is huge in Mexico,” said Enrique Burak, a veteran sports broadcaster for Televisa. “Marquez is the best fighter we have, and he’s fighting a boxer who was considered No. 1 pound for pound when he retired. The public wants to see this fight.

“There have been championship bouts on Mexican television all week as part of the Mexican Independence celebration. It started with (Cristian) Mijares (vs. Nehomar Cermeno), then we had (108-pound titleholder) Edgar Sosa and (prospect) Saul Alvarez on the same card while TV Azteca had (Jorge) Arce and (Humberto) Soto on Tuesday night, but the cream of the crop will be Mayweather-Marquez. That’s what everyone is waiting for.

“To me, the fight is as big as when Chavez fought De La Hoya the first time. I know De La Hoya is of Mexican descent but he’s American. He represented the U.S. in the Olympics like Mayweather, and he was undefeated at the time, like Floyd is now. De La Hoya was America’s biggest boxing star, now Mayweather is. That’s why a win Saturday would be so big for Marquez and for Mexico.

“It’s easy to say that it would be Mexico’s greatest boxing victory, but I won’t say that. It’s not fair to compare the present time with the past. Who knows for sure if (Marquez’s victory) would be our greatest boxing moment? There have been so many great moments that have happened in the past 40 or 50 years that have been forgotten.”

Rest assured, if Marquez beats Mayweather, it won’t be forgotten in 100 years.

Doug Fischer’s column appears every Thursday. You can reach him at [email protected]