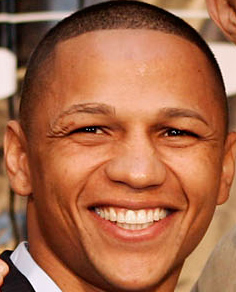 Calderon (33-0-1, 6 knockouts), who won by two scores of 68-65 (twice) and 65-68, used his superior footwork and accurate counter punching to outpoint his game Filipino challenger before an accidental clash of heads opened a nasty gash in the middle of the Puerto Rican veteran's forehead, forcing the bout to end in the seventh round.

Saturday's fight was a rematch of their June bout, which Calderon won by six-round technical draw after, you guessed it, the undefeated champ suffered a nasty cut to his forehead after an accidental headbutt.

The rematch with Mayol (25-4-1, 19 KOs) was the third consecutive time Calderon retained his title with a technical decision due to a cut forehead. (The first time it occurred was Calderon's rematch with Hugo Cazares last August.)

In the co-featured bout of the PR Best Promotions card, 130-pound titleholder Roman Martinez (23-0-1, 14 KOs) retained his WBO belt for the first time with a tougher-than-expected ninth-round stoppage of late-sub Feider Viloria (22-5-1, 15 KOs).

Martinez stalked forward for most of the fight, landing accurate power shots, but Viloria made things difficult for the Puerto Rican by utilizing constant lateral movement while pot shotting from odd angles.

Martinez stepped up his pressure in the seventh and eighth round before overwhelming his game opponent with a series of crosses and hooks in the ninth.