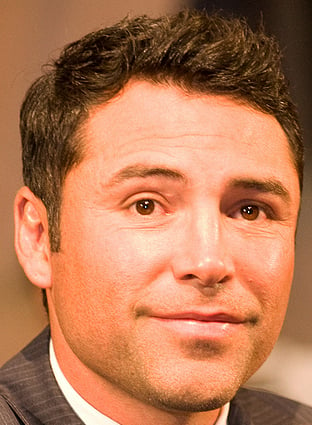 Oscar De La Hoya fought Floyd Mayweather Jr. on May 5, 2007 in Las Vegas, losing a razor-thin split decision. He looks back on that fight and describes what Juan Manuel Marquez must do if he hopes to beat the former pound-for-pound king on Sept. 19 in Las Vegas.

I’ve been in the ring with Floyd Mayweather Jr. and he’s vulnerable ÔÇª very, very vulnerable. I was surprised at how easy it was. Actually, I was shocked. It was so easy the first half of the fight that I couldn’t believe it. If I would’ve kept up my jab, even doubling or tripling it, it would’ve been an easy fight. Power? I didn’t feel any power from him. Yes, he was fast but it wasn’t overwhelming. It was one of those fights that I lost and he didn’t win. Physically, I just broke down.

I was surprised that I was able to connect with my jab so easily. And he didn’t know what to do after the jab connected. It would stop him in his tracks. I was surprised that in 37 (previous) fights no one could figure that out. The simplest weapon, the easiest one to throw, is the punch that has the most effect on him. He just didn’t know what to do with it. He panics. And when you get him into a panic mode, that’s when you have him. Marquez knows that. Nacho Beristain [Marquez’s trainer] has studied Mayweather.

Can Marquez be as effective with the jab? I think he can. He is shorter than I am but I fought Mayweather short. That was another mistake I made. I fought at Mayweather’s height, maybe even shorter. I crouched down when I threw the jab. I didn’t use my height advantage. Marquez is one of those technicians who always fights at his height. He not only uses his full reach but turns his body to where the jab reaches you much faster, much easier.

Speed is going to be important. I think timing punches is what really counts in this sport, though. You can be the fastest fighter on the planet. If you don’t have the right timing, you’re not going to land. If an opponent can time your punches, he’ll be able to counter you. Marquez has that kind of timing. He knows how to feint, how to throw you off your game plan. And he’s also fast.

Everyone is in awe of Mayweather’s defense. And he does have great defensive skills but only when opponents are throwing 1-, 2- or 3-punch combinations. He can block those combinations but is vulnerable when you throw 3-, 4-, 5-punches at a time; he doesn’t know what to do. Marquez has to do that. And I think that’s his bread and butter.

I look back on my fight with Mayweather as an easy fight that got away. As it was, I only lost by one or two rounds. What makes it easier for me to accept is that I was able to compete with the best pound-for-pound fighter in the world at that stage of my career. Some people thought I won and a lot say it was close. Hearing that eases the pain.

And now it’s Marquez’s turn. Here we have a guy who many people believe beat Manny Pacquiao twice and Pacquiao is considered the best pound for pound. We’ll see how he does on Sept. 19. Styles make fights and, as I’ve said, I think he has the style to pull an upset.