Arreola and his trainers dispute rumors at open workout 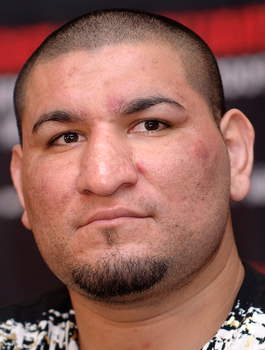 Chris Arreola (right) looked sharp working mitts with his trainer Henry Ramirez at a recent media workout. Ramirez is upset about rumors that Arreola, who challenges Vitali Klitschko for a heavyweight title on Sept. 26, is not in shape for the biggest fight of his career. Photo / Jan Sanders-Goossen Tutor Promotions

By the looks of Chris Arreola’s body and activity at a media workout on Wednesday, it’s clear that reports of his slothful training habits were greatly exaggerated.

The undefeated Mexican-American heavyweight contender, who challenges Vitali Klitschko for the giant Ukrainian’s WBC title on Sept. 26, was rumored to be out of shape and under-motivated to the point of not showing up to the gym.

There’s been so much talk of the Great Brown Hope being overweight in recent weeks that I was half-expecting to see a 300-pound blob walk through the doors of Joe Goossen’s Ten Goose gym in Van Nuys, Calif., the site of the open workout and Arreola’s training camp.

However, I’m pleased to report that Arreola (27-0, 24 knockouts) looked physically solid and technically sharp as he shadow-boxed with light hand weights, hit the mitts with his trainer Henry Ramirez and pounded one of the heavy bags in Goossen’s sweltering gym.

If you’re a Klitschko fan, don’t misread this report. I’m not pleased because I’m rooting for Arreola, a 6-to-1 underdog in some places, to pull the upset. I have nothing against Klitschko. In fact, I have a lot of respect for THE RING’s No.1 heavyweight contender.

I’m pleased that Arreola appears to be in shape (by his standards, mind you) because I want to see a good fight at L.A.’s Staples Center in two and a half weeks.

I began to have doubts about how competitive Arreola would be with Klitschko after watching the 6-foot-7 heavyweight shake out in an L.A. gym last week. Klitschko, 38, moved about like a man Arreola’s age while onlookers gossiped about the pudgy contender’s laziness.

However, after talking to Ramirez and Arreola’s conditioning coach, Darryl Hudson, on Wednesday, I once again believe that fans are going to be treated to something special on Sept. 26.

“Of course fans are going to get a fight,” Arreola insisted. “The only thing I can do is go in there and put on a great fight for the fans in Los Angeles.

He didn’t understand what all the concern was about. That’s because the 28-year-old L.A. native hasn’t been following the rumors on the internet.

Ramirez has, and what he’s read hasn’t put him in a good mood.

“I read that Chris is weighing 280 pounds, I read that he went AWOL for a few days and that his head’s not in this fight, all that crap,” he said. “All I can tell folks is that he’s definitely under 280 pounds, he’s in shape and he’s ready to fight.

“He went nine hard rounds with three good sparring partners yesterday — Malik Scott, Lance Whitaker and Cisse Salif — and he got stronger in the late rounds. He threw more than 80 punches in the ninth round, so what does that tell you?”

It tells me that Arreola is not out of shape. So where did the rumors about his skipping out on training start?

“The speculation as to why he missed a day is probably my fault,” Ramirez said. “Chris had the flu two weeks ago. I let some writers come to the gym and watch him train on a day when the flu got the better of him. He didn’t show up and I didn’t tell them why he didn’t show up because I figured it was nobody’s f—ing business.”

Arreola didn’t appear to suffer any lingering weakness from his illness during Wednesday’s workout. He hit the pads and the heavy bag with more power than I’m used to seeing from him.

However, his bout with the flu may have set the camp back a week in terms of where his weight is supposed to be at this time.

Arreola, who looked solid in a tight, colorful Remetee T-shirt, said he weighed around 258 pounds (but he’s probably in the low 260s). Ramirez said he plans to have Arreola come in around the 245-247 pound range for the weigh-in.

They have enough time for that to be a realistic goal, but Ramirez admits that they will push hard in the final two weeks of training.

“We’re up to nine rounds in sparring now, we’ll hit 10 rounds on Saturday and do two 12 rounders next week,” Ramirez said. “We’ll spar the Monday of fight week.”

This isn’t out of the ordinary for an Arreola camp. The Riverside, Calif., resident typically hits his peak late in training. That might just be the way his big body works, but part of the reason is his lifestyle between fights. Let’s just say Arreola leans more towards the James Toney school of preparedness than the Bernard Hopkins school.

“He was heavy at the start of this camp,” Ramirez admitted. “He wasn’t 300 pounds like some people are saying, but he got pretty big after the (Jameel) McCline fight (in April), and I’ll be honest with you, he was a p—k to deal with at that time and he looked like s–t for the first two weeks of sparring.”

Part of the reason for Arreola’s grumpiness and lack of form early in the camp, which began five weeks ago, was the new conditioning routine he was being put through by Hudson, who has worked with such world-class boxers as Winky Wright, Jeff Lacy, Lamon Brewster and (infamously) Shane Mosley.

Hudson’s leg and core strength drills, mixed with sprint and middle-distance intervals, took a toll on Arreola’s muscles. He was probably more sore than he’s ever been at the start of this camp.

Until this camp, Arreola’s idea of training was to show up to the gym, shadow box a few rounds, spar his ass off, bang the heavy bag and then hit the showers. It’s been enough for Arreola to win 27 fights without a loss, most by knockout. But his flabby appearance and 250-plus pounds fight weights drew criticism from boxing writers. A very shaky (but thrilling) shootout with Travis Walker last November sent a big fat red flag to Team Arreola’s upper management (promoter Dan Goossen and manager Al Haymon), which suggested the addition of a strength and conditioning coach might be overdue.

Enter Hudson, who is impressed with Arreola’s attitude and effort.

“He was open to trying new things, which is all I ask,” Hudson said. “He’s never done anything like what we are doing in this camp, and it’s been hard on him. He’s had to change his lifestyle and bad habits. He’s had to follow a controlled diet. He’s had to do two-a-days for the first time.

“It’s tough. He had a meltdown on me last week. His body hit a wall. It was OK. I was waiting for that to happen. It happens all the time. It lets me know it's time to change the routine up, and once again, he was open to that.

“Chris has shown me that he’s an athlete, a professional. He’s a strong dude who is more agile than he looks and he works hard.

“People shouldn’t judge him by his body type. He’s never going to look like the prime Evander Holyfield, he’s no Adonis, but I think in time his body will look harder and more sculpted that it does now. The important thing is his conditioning, which is there, and getting the strength he’ll need to battle Vitali on the inside. He’s getting that.”

Hudson’s strength and conditioning routine works in conjunction with Ramirez’s strategy, which is to either have Arreola chest to chest with Klitschko, inside the veteran’s reach, or all the way outside moving away from the giant’s range-finding left jab. They don’t want Arreola to get caught mid-range like most of Klitschko’s opponents.

“We’ve been working on foot speed through agility drills,” Hudson said. “We want him to be able to close the distance fast when he chooses to. We’ve had him do upper-body movement exercises to quicken the bob-and-weave movement he’ll need to slip Klitschko’s jab on his way in. We’ve been doing a lot of leg resistance work that will help him apply pressure but also change height (bend and crouch) as he moves in.

“And there’s been a lot of core work so he can handle himself on the inside. That’s one of Henry’s main concerns. We know it will take energy just to get close to Klitschko. He’s got to have strength and energy to let his hands go once he’s there.”

Ramirez concedes that Klitschko has looked formidable in his last two outings following his four-year hiatus, his title-winning stoppage of Sam Peter last October and his ninth-round TKO of Juan Carlos Gomez in March. However, Ramirez adds that the Nigerian slugger and Cuban southpaw made Klitschko’s job easy by standing in front of him.

“People who think Chris is going to stand right there and throw one punch at a time like Sam Peter are crazy,” he said. “We have a plan and it includes pressure, but intelligent pressure. And when we aren’t able to get in close, we’re going to surprise people by moving around him.

“I told Chris to take his time and don’t be surprised if we’re 0-3 on the scorecards after three rounds. We’re not going to be in a rush, we’ve got 12 rounds to work with and he’s going to be in shape to go 12 rounds come fight time.”

Ramirez and Arreola plan on testing Klitschko’s conditioning by setting the tempo of the fight. Arreola isn’t just going to be in shape to move and stay upright for 12 rounds if need be. The plan is to attack the older man, particularly his body, in every round.

“Everyone says Vitali’s got a good chin,” Ramirez said. “That’s good but we’re banging his body. We’re hitting his stomach, ribs, chest, arms, shoulders, whatever is there for us. The object is to fold the man in half, not to knock his head off.”

If Arreola peaks in two weeks and sticks to Ramirez’s plan of attack on fight night, win or lose, fans are going to get something special on Sept. 26.