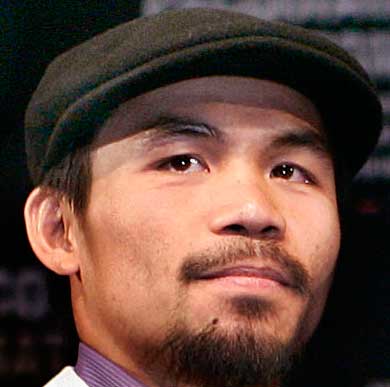 The pound-for-pound list has always been determined via imagination and speculation. We compare fighters separated by 11 or so weight classes and suggest who would win if this flyweight and that light heavyweight could magically transmogrify to the same size. We get creative, we think outside the box, we debate. Because the fighters in the discussion invariably span some 75 pounds, imagination and speculation are all we have.

Or, more accurately, they’re all we had.

All of a sudden, the fates have aligned in such a way that boxing’s pound-for-pound king might not have to be determined through imagination and speculation. Instead, we’re in an era where the best in the world might soon be crowned via results and reality.

There are currently three fighters with a case for being ranked number-one, pound-for-pound: There’s Manny Pacquiao, who is everybody’s number-one right now; and there are Juan Manuel Marquez and Floyd Mayweather, who fight each other Sept. 19 in a fight billed as “Number One/Numero Uno.” All three are currently campaigning at welterweight, or at a catchweight that counts as welterweight because it’s above the junior welter limit.

Two more fighters on THE RING’s pound-for-pound list, Shane Mosley and Miguel Cotto, also compete at welterweight, and a third, Paul Williams, claims he can make welterweight even if he hasn’t in 15 months. There is nobody in the entire sport making a strong push for the pound-for-pound pole position who isn’t a welterweight, give or take a few pounds. So it follows that the fights that need to be made to determine pound-for-pound supremacy are not just dream matches; they can actually be made, at least in theory.

But here is the ultimate ironic twist: While we enjoy this rare situation in which the P-4-P throne can be indisputably determined in the ring, the current monarch, Pacquiao, is in danger of losing his number-one ranking while he sits outside the ring.

Though Pac-Man has been consistently spectacular his last few times out and has faced every imaginable challenge (and even one that people initially considered unimaginable), the Mayweather-Marquez winner could unseat the Filipino in the minds of many fans and experts while Pacquiao watches, waits and trains for yet another massive challenge, against Cotto.

It’s not exactly fair. But boxing fans are rarely shy about jumping to conclusions based on whatever they saw most recently, and the Mayweather-Marquez winner could give his supporters a legitimate argument.

“There are absolutely scenarios where many if not most people would say, yes, this guy is pound-for-pound the best fighter in the world,” said HBO color analyst Max Kellerman. “If Mayweather routs MarquezÔÇöit’s not an early one-punch thing, it’s a total domination, he just does whatever he wantsÔÇöthe sense will be among many that Mayweather was number one pound-for-pound, and he still is. And if Marquez wins and Mayweather doesn’t look badÔÇöin other words, if he looks like a reasonable approximation of his former self, and Marquez beats him anywayÔÇöthen Marquez has a strong case because I would say the slight majority of people who saw Marquez vs. Pacquiao think Marquez won both fights.”

Let’s explore both of those scenarios in more detail, starting with Mayweather winning. When “Money” began his leave of absence (a much more accurate term than “retirement”) in 2008, he was almost universally recognized as the pound-for-pound king. He was undefeated through 39 fights, the lineal welterweight champion, and the reigning Fighter of the Year. So, as amazing as Pacquiao has been in his absenceÔÇöbeating both Oscar De La Hoya and Ricky Hatton with an ease that put Mayweather’s performances against that duo to shameÔÇöthere’s a sense among some that so long as Floyd hasn’t slipped, he’s still the man. And that position will be seriously strengthened if he can come right back and do what Pacquiao couldn’t in two tries: beat Marquez controversy-free.

What if Marquez wins? Unlike Mayweather, he doesn’t have to win by a comfortable margin to one-up Pacquiao; the Mexican just needs to score the victory, and he’ll get major top-spot consideration, largely because he’s moving up two weight classes. Look at his resume over the last 21/2 years: a win over Marco Antonio Barrera, a near-shutout of Rocky Juarez, a one-point loss to Pacquiao in a fight in which the majority of observers seemed to favor Marquez, and knockouts of Joel Casamayor and Juan Diaz, both of whom had never been stopped before. Add to that a win over the undefeated Mayweather at 144 pounds, and Pacquiao’s incredible recent run would arguably be trumped. Consider: Pacquiao’s biggest wins since the could’ve-gone-either-way rematch with Marquez are against De La Hoya and Hatton; Marquez will have beaten someone who beat both De La Hoya and Hatton.

If Mayweather wins comprehensively, the argument for keeping Pacquiao number one is centered largely around size. Pacquiao won his first title at flyweight and is naturally smaller than Mayweather, yet he manhandled De La Hoya and Hatton in a way that Money didn’t.

“When you think about what pound-for-pound really means, there’s special dispensation given to fighters who are fighting above their natural weight class,” Kellerman observed. “Pacquiao gets, and deserves, all this extra credit for what he’s doing several weight classes above his natural weight. So that’s a counter to the Mayweather argument, that Pacquiao is naturally smaller than Floyd and yet is beating these same guys so dominantly.”

That counter doesn’t work as well if Marquez wins, because at 144 pounds, “Dinamita” is just as far out of his comfort zone as Pacquiao. What Pacquiao has over Marquez, however, is this somewhat intangible perception of transcendent greatness that Marquez hasn’t even sniffed (though he may begin to if he outboxes Mayweather).

“Marquez is compared to the other best fighters in the world; Pacquiao is compared to all-time greats based on how he’s blitzing these bigger guys,” said Kellerman. “Pacquiao has captured our imaginations in a way that Marquez hasn’t. Pacquiao is being compared to Henry Armstrong, Roberto Duran. We’re asking questions like, ‘Where does he rank among the greatest pressure fighters of all-time?’ With Marquez, it’s still just, ‘How does Marquez compare to this current fighter or that current fighter?'”

There’s one other very important argument in favor of Pacquiao remaining number one no matter what happens in Mayweather-Marquez: Pac-Man fights Cotto two months later and has earned the benefit of a little patience.

For Nigel Collins, the Editor-in-Chief of THE RING, that luxury doesn’t exist. With the help of his staff and the members of THE RING’s ratings advisory panel, he will have to compile new P-4-P ratings the Monday after Mayweather-Marquez. And when asked for an official statement on whether the magazine will wait for the Pacquiao-Cotto fight to consider changes to the number-one spot, he said that anything is possible.

“I don’t want to commit to any particular stance as far as the future of the pound-for-pound ratings are concerned,” Collins said. “It makes more sense to wait and see what happens, especially as P-4-P is a highly subjective thing. Hypothetically, THE RING could make a change after Marquez-Mayweather or wait until after Pacquiao-Cotto, but I want to keep all options open.”

Taking things one step farther, on the morning of Nov. 15, it’s conceivable that the pound-for-pound king won’t be named Mayweather, Marquez or Pacquiao. It could be Cotto if he beats Pacquiao convincinglyÔÇöparticularly if he knocks him out.

After all, Cotto only has one loss on his record, and it’s accompanied by an asterisk the size of Antonio Margarito’s mullet. If you consider that loss to be an unfair mark against Cotto, as many fans do, and you look at a record that contains both a close win over top-five pound-for-pounder Mosley and a victory over number-one P-4-P Pacquiao, and you give him extra points for overcoming the physical damage done in the Margarito fight, then you have an excellent case for the Puerto Rican ascending to the top spot.

Pound-for-pound is a funny thing. It doesn’t have the practical application of divisional rankings, but to many fight fans, it matters more than any divisional rankings. It’s a barbershop topic that never dies down, and it grows particularly loud above the snipping and clipping when there’s legitimate debate over who belongs on top.

If we’re really lucky, the Mayweather-Marquez winner will fight the Pacquiao-Cotto winner and there will no longer be any debate. But until then, each fight has the potential to shake things up. And that means Pacquiao’s “title” could be on the line in two weeks without him in the ring to defend it.

┬À How’s this for a potential ironic twist: With Cedric Boswell scheduled to fight Alexander Ustinov in the co-feature to Vitali Klitschko-Cris Arreola at Staples Center on Sept. 26, if Arreola drops out with an injury at the last minute, maybe Boswell could be the late-sub challenger for Klitschko. In case you’ve forgotten, six years ago it was Boswell who was supposed to fight Vitali at Staples in the co-feature to Lennox Lewis-Kirk Johnson before Johnson backed out and Klitschko moved into the main event.

┬À Is there really talk of Hasim Rahman-David Tua III in 2010? Considering Beverly Hills Cop IV is in the works for 2012, this isn’t quite the most depressing sequel rumor floating around. But if you add Evander Holyfield-John Ruiz IV to the undercard, it will be.

┬À Well, the “24/7 Drinking Game” was fun for a minute there, but I think I lost my appetite for it when Marquez drank 25 raw quail eggs and called the lumps in the beverage “turkey boogers,” then put that feat to shame by drinking his own urine on camera. Game over. My head will be over the toilet bowl if you need me.