Adamek-Golota set for Oct. 24 in Poland 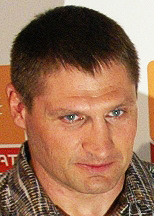 If the news conference announcing the Tomasz Adamek-Andrew Golota fight on Oct. 24 in Poland took you by surprise, you’re not alone. Even Adamek’s promoter, Kathy Duva, was caught somewhat off guard.

Of course, there was talk of an all-Pole fight in Warsaw but everyone involved wondered whether the flighty Golota would even show up if a news conference were held. Duva had actually heard that the fight was off.

Then the next thing she hears is that Golota, who lives in Chicago, is on a plane Monday bound for Poland and the news conference.

Ziggy Rozalski, the manager of both fighters, put the fight together because Duva couldn’t guarantee a more-lucrative matchup between Adamek and Bernard Hopkins on HBO in January in Newark, N.J.

“The fight has been announced.”

Adamek and Hopkins agreed on how to split the pot for a potential fight. However, the pot wasn’t big enough for Hopkins. The fighters were hoping that HBO would raise the licensing fee they offered but had yet to hear from the network.

If HBO comes up with more money in the next day or so, Duva said, the Adamek-Golota fight would be canceled — but she isn’t optimistic.

“I’ve called HBO repeatedly,” she said. “They say they don’t have their budget yet and they might not have it until the end of September. Obviously, that would be too late to cancel a fight in October. ÔÇª I asked Ziggy at our meeting (Wednesday) and he said we could cancel the fight this week but no later than that.”

Richard Schaefer of Golden Boy Promotions, Hopkins’ promoter, reiterated on Wednesday that Hopkins will not fight Adamek if he fights Golota. Hopkins isn’t interested in committing to a fight in January that would fall out if Adamek lost or was injured against Golota.

“I personally would feel better if the Hopkins fight were made,” she said. “I can’t have them postpone or put off the (Golota) fight and not deliver another fight, though. I feel like I’m stuck in a crappy situation.”

Meanwhile, the fighters seem to be excited about what will certainly be the biggest professional fight ever in their native Poland.

“If somebody asks to me to dance, I never say no. And this was Adamek's idea, not mine, so I said, ‘Why not?'” Golota said, according to a press release. “ÔÇª He (Adamek) is faster than a bullet and lightning combined; I have to be very careful. But he is also easy to hit. This is the way I see this fight. And he never fought anybody from the heavyweight division; he has no idea how hard we can hit. He will know in about two months.

“I hate breaks in training, my place is in Chicago, but I understand they had to make this official, because nobody could believe he wants to fight, including me”

Adamek (38-1, 26 knockouts) arguably is the greatest fighter Poland has produced but will be fighting a heavyweight for the first time. Golota (41-7-1, 33) weighed 242 pounds in his last fight, against Ray Austin last November in China. The unpredictable Golota, 41, was knocked down in the first round, claimed his shoulder was injured and declined to continue fighting.

Meanwhile, Adamek, 32, still holds out hope of fighting both Golota and Hopkins.

“Just happens this way, that I will fight two 40 year olds – first Golota, and then, hopefully, Bernard Hopkins on Jan. 30, 2010 in Newark. And I will defeat them both,” Adamek said in the press release. “Andrew is Andrew, always laughing, making jokes, some of them about my skills. No problem, nobody ever went down from words. Let’s see what will happen when we will be in the ring.

“Everytime I go into ring, I bring a 100 percent of my skills. Andrew talks about how big he is, and so on. Two words from me – speed kills. He will never be close enough to hit me.”

Duva is nervous about the size difference even though Adamek, THE RING cruiserweight champion, has an exceptional chin.

“Adamek is confident he’ll win,” she said. “He has pretty good judgment. I respect the belief he has in himself; he knows what he can do and can’t do. If he walks into one, though, I don’t care how good he is. Golota can hit like a truck.