Mayweather-Marquez: Coming to a theater near you 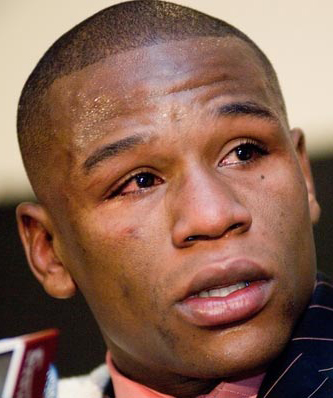 Floyd Mayweather Jr. and Juan Manuel Marquez are going back to the future.

Their Sept. 19 fight in Las Vegas will be shown live on movie theater screens across the United States, a practice that began in the late 1930s, became common in the U.S. as early as the ’50s but hasn’t been done for a fight of this magnitude in 30 years.

And contemporary technology provides a twist for Mayweather-Marquez: high definition, apparently a first for boxing.

At least 170 theaters in 78 major markets will be showing the fight. The suggested price of admission is $15 per person.

Plus, 30-second previews of the fight will be shown before the start of movies at 1,500 screens as part of a comprehensive marketing plan.

This is a creative salvo in boxing's attempt to reach a wider audience.

“I really think the younger audience, the fans that go to a theater on Saturday night, they don’t want to stay at home,” Golden Boy Promotions CEO Richard Shaefer said on a conference call. “I think this is going to open up the sport of boxing to a new and younger audience.”

I remember watching “The Super fight” — a computer fight staged by Muhammad Ali and Rocky Marciano – in a theater as a child in 1970 and being transfixed. As far as I was concerned, I was at the fight.

“Watching fights at the movies goes back to the 1940s,” boxing historian Bert Sugar said in a press release. “It’s the next best thing to being there. Seeing a fight at a movie theater is the ultimate virtual experience. You pretty much get everything but the sweat.”

NCM Fathom, which is partnering with Golden Boy, is a company that brings a variety of unusual events to movie screens. That includes opera, comedy, music, talk-radio, original programs and children's programs.

“Several things occur in a theater environment you don’t get in other places,” Diamond said. “We’ve seen it with other programs. The energy and environment is so exciting in a movie theater space for a community of engaged fans. It’s larger than life, high definition. You feel like you’re there.

“A good example is the Metropolitan Opera in New York. We’re in our fourth season. The atmosphere is just incredible.”

And the price would seem to be affordable, particularly compared to ringside seats.

“The idea was to make it affordable for families to attend,” Diamond said. “There’s nothing like being ringside at a live boxing event but for the vast majority of fans across the country that’s not going to happen. This is like a front-row seat and you don’t have to cancel your vacation to do it.”

The card, which will take place at the MGM Grand, also will be available on pay-per-view television.