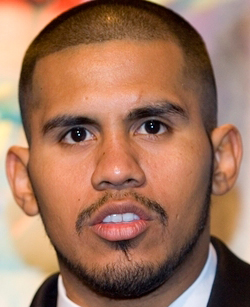 Juan Diaz is only 25 years old but the all-action lightweight has already accomplished everything a young boxer dreams about when he turns pro.

He’s made good money. He’s fought most of his career on TV. He’s won three major world titles. He’s developed a loyal following in his hometown of Houston.

He’s even accomplished something most prize fighters don’t dream about but probably should: Diaz earned a bachelor’s degree from the University of Houston-Downtown in May, laying the foundation for a successful life after boxing.

However, he is far from finished with the sport. Diaz wants to be considered one of the best fighters pound for pound in the world and eventually earn his place in the International Boxing Hall of Fame.

Diaz, already THE RING and ESPN.com’s top-rated lightweight contender, continues his quest for elite status this Saturday when he fights former junior welterweight titleholder Paul Malignaggi at the Toyota Center in Houston.

“I’ve been a world champ, and I’ve been the best lightweight. Now I want to fight the best fighters in the world in other divisions and prove that I can be the best in any weight class,” Diaz told RingTV.com on Tuesday. “I want to go down as one of the best fighters of this decade.”

Diaz was well on his way to establishing that kind of legacy before he lost his world titles to Nate Campbell last March. He rebounded from that decision loss by scoring an impressive points victory over Michael Katsidis in front of more than 13,000 fans at the Toyota Center six months later.

In February, Diaz was close to clinching pound-for-pound recognition when he appeared on his way to defeating lightweight champ Juan Manuel Marquez in front of 15,000 screaming fans at the Toyota Center. However, after storming out to an early lead and repeatedly hurting the future hall of famer, Marquez gradually worked his way into the bout and leveled the young pressure fighter in the ninth round of what is still the leading ‘Fight of the Year’ candidate.

Diaz (34-2, 17 knockouts) says the TKO loss hurt his pride but it also let him know that he has the ability to compete with the elite fighters of the sport.

Diaz wants a rematch with Marquez but he’s also eager to test himself against the young guns of the junior welterweight division.

“I won’t say super lightweight has better competition than lightweight but there are better-known fighters at 140 pounds and I think I would make for great fights with all of them,” Diaz said.

His promoter and manager agree. Both Richard Schaefer and Willie Savannah brought up 140-pound titleholders Timothy Bradley and Amir Khan as future opponents for Diaz.

Of course, there’s no point in pontificating on those matchups if Diaz doesn’t defeat Malignaggi (26-2, with 5 KOs), which the fighter says will not be an easy task despite the New Yorker’s low knockout percentage.

“The Marquez fight taught me not to underestimate anyone, ever,” Diaz said. “The way I went at Marquez in the early rounds, pushing him back and taking his punches, made me think to myself ‘Is this all he has?’ I thought I’d been hit a lot harder by other fighters I’d beaten easily. But the accumulation of his punches caught up with me and he got me late. I learned that it doesn’t matter if I feel the punches or not, they can still add up and do damage.”

Diaz has put in his usual hard work for Malignaggi, whose only two losses are to Miguel Cotto and Ricky Hatton. He has sparred close to 100 rounds with three hungry prospects — California’s Dominic Salcido, Washington’s David Torres and Arkansas’ Rashad Ganaway — to ensure he’s ready for Malignaggi’s blend of speed, slickness and toughness.

“Those three guys were there to give me various styles because Malignaggi can give you different looks,” Diaz said. “Sometimes he boxes smoothly, sometimes he brings it, sometimes he grapples on the inside.

“I doubt he’ll be aggressive with me. He knows that aggression is my specialty. Everyone knows I love to go toe to toe. I think he’ll punch and move, but I’ll be ready for whatever he brings.”

Diaz’s preparation, both physical and mental, have always enabled him to exceed the expectations of others. When he sets his mind to something it usually gets done, whether it’s winning a world at the age of 20 or graduating from college after years of grinding as a part-time student.

Now that Diaz has set his sights on solidifying his boxing legacy
Savannah has no doubt that the young man will make good on his goal.

“Juan is not the kind of fighter who boasts and brags and makes all kinds of bold predictions, but he wants to be great,” said Savannah, who trained Diaz in the amateurs and manages his pro career. “He wants to be in the hall of fame one day and I believe he will be. I’ve told Juan, ever since he was 12 years old and fighting in the Silver Gloves, ‘You are very special, you are one of a kind, and as long as you keep your focus, you will be one of the greats.’

“You can’t tell me Juan isn’t special. He was beating grown men in the open class of the amateurs, the best in the world, when he was only 15 and 16 years old. When he was 17 years old he was a pro and fighting on Showtime.”

Now Diaz is fighting on HBO and he’s not only entertaining TV audiences by matching his relentless style against the likes of Acelino Freitas, Julio Diaz, Campbell, Katsidis and Marquez, but he’s also developed into one of the sport’s leading regional attractions as his last two bouts have proven.

Diaz, Savannah and Golden Boy Promotions are proud of the 13,000-plus crowds that gathered for the Katsidis and Marquez bouts, but they don’t expect that big of a turnout for Saturday’s event, which is co-headlined by Malcolm Klassen-Robert Guerrero and Daniel Jacobs-Ishe Smith.

The two co-featured bouts, which will also be part on HBO’s Boxing After Dark broadcast, are quality matchups but none of the four fighters hail from Houston or even Texas.

Savannah says the lack of locals in the main bouts is the reason ticket sales are not as strong for Saturday’s fight as Diaz’s last two bouts at the Toyota Center.

“You got two brothers [African-American fighters], one from the East Coast (Daniels) and one from the West Coast (Smith), on this card. Why? I asked the folks at Golden Boy Promotions, ‘Do you know the social make up of Houston?’ We got Mexicans and folks who want to see fighters from Texas, not brothers from New York City,” said Savannah, who is African-American. “Then you got a dude from South Africa (Klassen) fighting a kid from California (Guerrero). They’re all good fighters but they don’t mean anything to Houston fans.

Indeed it would have.

Juarez, a Houston native, stopped Jorge Barrios in the co-featured bout of Diaz-Katsidis. The perennial featherweight contender battled Chris John to a highly-entertaining draw in the main support to Diaz-Marquez.

“Rocky definitely helps with the promotions in Houston,” Diaz said. “We’re both from here and we both have our own fans. If he was on this card I think there would automatically be 3,000 to 4,000 extra tickets sold, maybe more.”

Schaefer said he would have liked to pair Diaz and Juarez up again but a few issues prevented it from happening this time.

The first issue is that Juarez had set his sights on a rematch with John, not Klassen (who holds a 130-pound belt) or any other titleholder. John was willing to face Juarez again but the Indonesian boxer did not want to return to Houston, where he thought he was almost robbed of his title in February.

Golden Boy Promotions tried to put the rematch on the June 27 Ortiz-Maidana card in L.A., but John suffered a fainting spell a week before the fight which temporarily scrapped the bout and put Juarez’s availability in limbo.

“Even if John was willing to fight in Houston, his health issues were not resolved in time to add him to Saturday’s card,” Schaefer said. “We were able to get Klassen-Guerrero done, HBO was interested in that bout, so we struck while the iron was hot. Juarez could have fought someone else on Saturday’s card, but it’s John he wants to fight so that’s the fight we pursued and we were finally able to add it to the Mayweather-Marquez undercard.

“I think the rematch is a good pay-per-view fight and I think both John and Juarez deserve to be part of one of the biggest events this year.”

Savannah still thinks Diaz-Malignaggi could have been a bigger event, but it’s not as though ticket sells are lagging.

“The buzz for this fight is not as intense as it was for the Marquez fight, but I still think we’ll have a good turnout,” Diaz said. “I know there were 6,000 tickets sold a week ago. Hopefully, we’ll have 8,000 by the end of the week and a good day on Saturday, so we can have 10,000 in the arena when I fight.”

Schaefer says close to 7,500 tickets have been sold as of Wednesday and he expects a strong walk up, noting that tickets were sold in the six-figure range during in the final week of both of Diaz’s previous bouts at the Toyota Center.

“Strong final days are a trend we’ve noticed with Mexican fans here in Texas in particular,” Schaefer said. “We did over $100,000 gate with the Antonio Escalante show in El Paso last month and most of those tickets were sold the same day as the fight.

“The lesson learned with this promotion is that it is important to have both Diaz and Juarez on the same card in Houston. I think we’ll still have a good crowd Saturday night and we will bring Juan back next year. Diaz-Malignaggi would not have sold as many tickets anywhere else. Houston is a great market for boxing and it’s the perfect spot for Diaz.”

Saturday night is the perfect time for Diaz to launch a lasting legacy.