De La Hoya not worried about Sept. 19 conflict with UFC 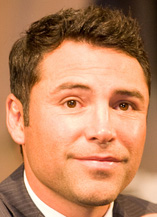 Mayweather’s comeback fight and UFC 103 are both scheduled to take place that night and both are on pay-per-view television, which means they’ll be competing for pay-per-view buys in a struggling economy.

So is Oscar De La Hoya, whose Golden Boy Promotions is staging the Mayweather-Marquez card, worried? Doesn’t sound like it.

“I’m not concerned whatsoever,” he said. “I feel strongly that UFC has its audience and we have ours. We have a strong, solid foundation of fans who have supported boxing for many years. If you give them a good fight, they’ll watch.

There are underlying stories behind the scheduling conflict, starting with Mayweather.

The loquacious former pound-for-pound boxing king, who hasn’t fought in almost two years, has publicly criticized Mixed Martial Arts and its fighters. Dana White, UFC’s president, has fired back with criticism of Mayweather.

And De La Hoya has ties to Affliction MMA, UFC’s former rival. Thus, the competing entities don’t necessarily have warm feelings for one another.

Richard Schaefer, CEO of Golden Boy, is openly disgusted. He believes White intentionally scheduled his UFC show on the same night as Mayweather-Marquez to sabotage the promotion, saying Sept. 19 — three days after Mexican Independence Day — has always been a big night for boxing and White knows it.

He also said White’s actions will come back to bite him one day.

The former multiple-weight champion questioned the pay-per-view numbers UFC reports, including the 1.5 million-plus for UFC 100. And even if that number for UFC’s biggest night ever is accurate, he said, he’s not overwhelmed. Boxing shows have exceeded that number at least three times.

That was the extent of anything that could be construed as negative.

He explained why he believes the Mayweather-Marquez card will generate interest with or without the UFC card. He said Mayweather has become a crossover star with a substantial following; Marquez has a solid Mexican and Mexican-American fan base; HBO’s 24/7 helps generate numbers; and he will soon unveil a novel marketing campaign he believes will reach unprecedented numbers of potential customers.

And he wishes UFC well.

“UFC is its own sport and so is boxing,” he said. “We can live happily ever after side by side. There doesn’t have to be this back-and-forth bashing each other. They’re doing a wonderful job. We do a good job.