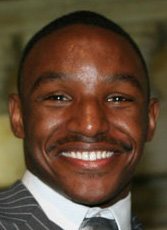 Devon Alexander (center), flanked by promoter Don King (left) and longtime trainer Kevin Cunningham (right) after his TKO of Junior Witter on Saturday, advanced from prospect to contender with his title-winning effort. The St. Louis-born southpaw appears to have a bright future in the deep 140-pound division. Photo / Naoki Fukuda

It’s rare for an untested young prospect to win a major world title before he’s established himself as a bona fide contender, however the fighters with the talent to pull off this feat in recent years have proved worthy of THE RING ranking they earned with their title victories.

Will Devon Alexander join the recent list of prospect-to-titleholders who have established themselves as major players in their respective divisions?

Only time will tell.

However, the undefeated junior welterweight standout, who was unranked by THE RING going into his fight with Junior Witter on Saturday, showed promise in stopping the magazine’s No. 3-rated 140-pound contender after eight rounds, collecting the vacant WBC title in the process.

If Alexander (19-0, 12 knockouts) merely equals the success of the other young prospects who won major belts by beating established contenders the well-schooled southpaw will make fans in his native St. Louis, Mo., proud.

In 2006, Venezuelan KO artist Edwin Valero proved to be more than internet hype when he outlasted THE RING’s No. 4-rated junior lightweight Vicente Mosquera in a wild shootout that earned him the WBA’s 130-pound title. Since that grueling 10th-round stoppage, Valero has won five bouts in a row, extending his knockout streak to 25-0 and establishing himself in the lightweight division, where THE RING currently ranks him No. 3.

In 2007, Nonito Donaire debuted as THE RING’s No. 1-rated 112-pound contender by knocking out No. 2-rated Vic Darchinyan to earn the previously undefeated Armenian’s IBF belt. The ultra-talented Filipino flyweight has made three title defenses, stopping solid opposition in each fight. Also in 2007, Jorge Linares debuted as THE RING’s No. 9-rated featherweight after stopping Oscar Larios for the WBC 126-pound title. The classy Venezuelan technician has won three in a row since the impressive 10th-round stoppage, establishing himself in the junior lightweight division, where THE RING currently ranks him No. 7.

Last year, Juan Manuel Lopez debuted as THE RING’s No. 3-rated junior featherweight on the strength of his one-round KO of Daniel Ponce DeLeon, which earned the southpaw boxer-puncher the WBO belt. Since crushing the once-beaten Mexican slugger, the Puerto Rican sensation has defended his title four times — all by stoppage — in impressive fashion.

Alexander does not posses the raw power of Valero and Lopez. He isn’t as athletically gifted as Donaire, and he may not be as fluid or technically proficient as Linares is, but the Missourian is in a deep and talented division that offers more high-profile opportunities than his peers have in their respective weight classes.

Tim Bradley, THE RING’s No. 1-rated junior welterweight, abdicated the WBC title rather than defend it against the then-unproven Alexander. Bradley, who looked impressive vs. Nate Campbell on the same card and Showtime broadcast that Alexander beat Witter on, may change his mind now the prospect has advanced to bona fide contender status.

The winners of the Juan Diaz-Paul Malignaggi and Juan Urango-Randall Bailey bouts that take place later this month also make for TV-worthy showdowns with Alexander, as would hard-hitting warriors Marcos Maidana and Ricardo Torres.

Where did Alexander land after besting Witter? Check out THE RING’s ratings update to find out.

Previously unranked Devon Alexander debuted at No. 4 on the strength of his eighth-round TKO of Junior Witter (37-3-2, 22 KOs), who was No. 3 last week. Amir Khan advanced from No. 4 to No. 3 in the realignment, while Witter exited the rankings.