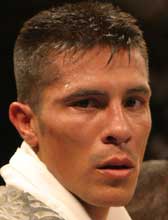 Have we seen the last of Julio Diaz?

The former two-time titleholder, who is only 29, lost a unanimous decision to Victor Cayo of the Dominican Republic in a 10-round junior welterweight fight Friday night in Hollywood, Fla., Diaz’s third loss in his last five fights.

The Coachella, Calif., fighter had acknowledged before the fight that the result would help determine whether he will continue fighting.

Diaz has now lost his last two fights, a fifth-round knockout to Rolando Reyes in April and the loss to Cayo. He also was stopped in 10 rounds by Juan Diaz in 2007.