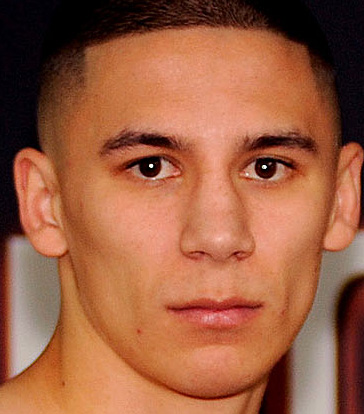 Fight Night Club was designed by Golden Boy Promotions to build its young fighters. On Thursday night at Club Nokia in L.A., one of them was taking apart with one punch.

Derrick Wilson, a dynamo from Ft. Myers, Fla., landed a devastating left hook that put Charles Huerta on his pants and hurt him badly in the first round of a scheduled six-round featherweight bout. He got up on one knee but, apparently dazed, he failed to rise by the count of 10 and that was that.

The fight officially ended at 59 seconds, which didn’t sit well with the large, spirited crowd at the night club-turned-boxing venue. A few pelted the ring area with debris before quickly calming down.

“Since I got this fight, I told everybody I was going to defeat this guy,” said Wilson (5-0-1, 2 knockouts). “This guy is a nobody. Now I have two knockouts. I proved I can fight anyone, anywhere, anytime.”

That big left hook instantly altered his plans, though, at least for now. Huerta, from Paramount, Calif., had little to say afterward.

“He caught me with a good shot,” Huerta said. “My legs were responding, though. I think the referee [Raul Caiz] should’ve let me continue. He did his job, though, so I respect that. I want a rematch immediately.”

Huerta might’ve proved with that comment that he couldn’t continue. Caiz cannot allow a fight to go on if he counts a fighter out.

“I came with everything,” he said. “I knew I could knock him out.”

Other than that, it was a good night for Golden Boy.

The second Fight Night Club card was as entertaining as the first last month, and the crowd — many in a jam-packed standing-room-only — was bigger and very enthusiastic.

And the other Golden Boy fighters won.

In the co-main event, Luis Ramos stopped veteran Sandro Marcos 59 seconds into the sixth round and final round of a lightweight bout but it was no easy victory.

Ramos, one of the hot prospects signed recently by Golden Boy, put Marcos (29-20-2, 24 KOs) down twice in the first round and appeared to be on his way to a quick victory. However, the tough Mexican wouldn’t go away.

Ramos (12-0, 7 KOs) won every round because he is a better, more-gifted boxer. The southpaw must’ve outlanded Marcos 2-1 in punches, including many that were hard and effective. Marcos went down from a right uppercut and then a right hook.

Marcos also landed some very hard shots, though. One in the third round rocked Ramos, who obviously can take a punch.

Finally, in the sixth, all the punches Ramos landed — to both the body and head — took their toll. He put Marcos down with a left-right combination. Marcos was able to get up but the fight was stopped by referee Jerry Cantu.

“He’s a veteran, very strong,” Ramos said of Marcos. “I think the shots to body paid the bills.”

Marcos said he didn’t know he would be facing a southpaw until fight time.

In another featured bout, it took prospect Carlos Molina (8-0, 4 KOs) some time to figure out Eber Luis Perez (9-13-1, 7 KOs) but he finally did, stopping his more-experienced opponent at 2:39 of the fourth and final round of a junior welterweight fight.

Molina, another Golden Boy fighter, said he had difficulty getting inside the New Yorker’s long reach. However, he finally was able to hurt Perez in the final seconds of the third round. Then, in the fourth, Molina unloaded a relentless attack that Perez somehow absorbed until Cantu mercifully stopped it.

Rios, a former amateur standout who also recently signed with Golden Boy, knocked down Aranda (8-10-2, 2 knockouts) with a straight right in the third round.

All three judges gave every round to the less-experienced fighter: 40-35.

“I feel very happy,” said Rios, who is from Santa Ana, Calif. “He has a very weird style. I wasn't looking for a knockout; I just boxed him. I'm still learning. I know I can do better.”

Aranda has fought many good fighters, both in sanctioned fights and in sparring in his hometown of Las Vegas. He gave Rios credit.

And a four-round heavyweight bout between Herman Binek of Santa Ana and Yohan Banks of Redwood City, Calif., was delayed for about 20 minutes when a ring post became disconnected from its base during the opening round.