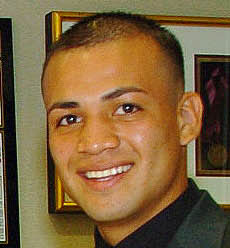 Luis Ramos stopped veteran Sandro Marcos 59 seconds into the sixth round on the Fight Night Club card Thursday at Club Nokia in Los Angeles but it was no easy victory.

Ramos, one of the hot prospects signed recently by Golden Boy Promotions, put Marcos (29-20-2, 24 knockouts) down twice in the first round and appeared to be on his way to a quick victory. However, the tough Mexican wouldn’t go away.

Ramos (12-0, 7 KOs) won every round because he is a better, more-gifted boxer. The southpaw must’ve outlanded Marcos 2-1 in punches, including many that were hard and effective. Marcos went down from a right uppercut and then a right hook.

Marcos also landed some very hard shots, though. One in the third round rocked Ramos, who obviously can take a punch.

Finally, the sixth, all the punches Ramos landed – the body and head – took their toll. He put Marcos down with a left-right combination. Marcos was able to get up but the fight was stopped by referee Jerry Cantu.

“He’s a veteran, very strong,” Ramos said of Marcos. “I think the shots to body paid the bills.”

Marcos said he didn't know he would be facing a southpaw until fighttime.

Rios, a former amatuer standout who also recently signed with Golden Boy Promotions, knocked down Aranda (8-10-2, 2 knockouts) with a straight right in the third round.

All three judges gave every round to the less-experienced fighter: 40-35.

“I feel very happy,” said Rios, who is from Santa Ana, Calif. “He has a very weird style. I wasn't looking for a knockout; I just boxed him. I'm still learning. I know I can do better.”

Aranda has fought many good fighters, both in sanctioned fights and in sparring in his hometown of Las Vegas. He gave Rios credit.

A four-round heavyweight bout between Herman Binek of Santa Ana and Yohan Banks of Redwood City, Calif., was delayed for about 20 minutes when a ring post became disconnected with its base during the opening round.