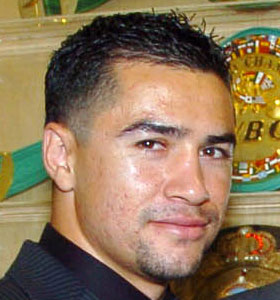 Carlos Molina will face Colombian Ever Luis Perez in a four-round lightweight bout on the “Fight Night Club” card Thursday at Club Nokia in Los Angeles.

Perez (11-17, 8 knockouts) started his career 8-2 but has become a professional opponent, going 3-15 the rest of the way. The 35-year-old from Cartagena is actually coming off a knockout victory in his home country last month, though.

Molina (7-0, 3 KOs) , of Commerce, Calif., has barely lost a round in his young career. He signed with Golden Boy Promotions last week.

Also on the card, Ronny Rios (5-0, 2 KOs) will face Rodrigo Aranda, a 35-year-old Mexican who lives in Las Vegas. Aranda (8-9, 2 KOs) also has lost most of his recent fights but has never been stopped.