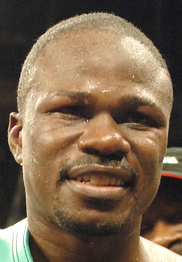 Death of Vernon Forrest: I’ve always said that boxers are among the nicest professional athletes. Forrest was particularly nice even by boxing standards. The four-time titleholder, who was murdered in an apparent robbery attempt on Saturday, was the kind of guy who always greeted you with a smile and a warm handshake. And it was no act; clearly, he went out of his way to treat people well. The fact he did more than his share of charitable work – with children, no less — surprises no one who knows him. This is what makes his senseless death particularly painful. And it should be noted that the 1992 Olympian was a hell of a fighter. His two victories over Shane Mosley leave no doubt about that. The world lost a gem on Saturday.

The boxing world: First Alexis Arguello. Then Arturo Gatti. And now Vernon Forrest. All within a few weeks. It doesn’t get much worse than this for those of us who care about fighters not only as athletes but as people. Some people have inner demons they ultimately cannot conquer, which seemed to apply to Arguello. Some fighters die young because they live fast, dangerous lives, which apparently was the case with Gatti. And some are just in the wrong place at the wrong time, as Forrest obviously was. However, it doesn’t matter how we lose fighters – it hurts just the same. We can only hope that they knew how grateful we are for all the wonderful memories.

Death of Marco Antonio Nazareth: Lost in the passing of the three big-name fighters the past few weeks was the death of an unknown 23-year-old Mexican boxer who was just beginning his career. It’s important to note that the boxing world mourns his death, too. Every time someone dies in the ring it reminds us that boxers – good, bad and everything in between — put their lives on the line every time they step through the ropes. They all risk suffering the fate of Nazareth or that of Omar Chavez, Julio Cesar Chavez’s son, who delivered the blows July 18 that ended his opponent’s life and must live with that fact. It’s one reason we admire them so much; and one reason we’re so sad when this happens.

Miguel Acosta: Miguel who? Few of us had even heard of the 31-year-old lightweight from Venezuela before Saturday. That changed in an instant when the slick boxer stopped then-undefeated Urbano Antillon with a perfect right uppercut in Mexico to win the WBA interim title and become a legitimate factor in the lightweight division. Acosta must’ve been rethinking his career choice when he lost three consecutive fights in 2002-03 in Venezuela and Colombia. Instead, he took six months off and then started a streak of 17 consecutive victories – including a split decision over also-undefeated Anges Adjaho in a WBA junior lightweight title eliminator in 2007 and Saturday’s big upset. Welcome to the big time, Miguel.

Urbano Antillon: Antillon was undefeated and looking forward to what he hoped would be a meeting with Edwin Valero for the Venezuelan’s WBC lightweight title. However, another Venezulan, Miguel Acosta, slammed the brakes on his momentum by scoring a stunning knockout on Saturday night in Mexico. Now, Antillon must watch a recording of the fight and work to correct his mistakes if he hopes to reclaim his place among the elite lightweights. Acosta said after the fight that he would give Antillon a rematch. That would give the well-liked Maywood, Calif., fighter the opportunity to show he is better than he was on Saturday, which wasn’t very good.

Haye vs. Valuev: Not too many heavyweight matchups are more intriguing than David Haye vs. a Klitschko. Sadly, Haye has managed to let a fight against each slip past him. He was scheduled to face Wladimir last month but pulled out because of a “back injury” and jilted Vitali to go after WBA titleholder Nikolai Valuev on Nov. 7. Haye-Valuev ÔÇª oh boy. Haye is probably thinking that he’ll make himself more marketable by winning a major belt, even if it’s against a less-challenging opponent. Then he could go after one of the big Ukrainians in a mega-fight. The problem is this: Each Klitschko has been burned by Haye. They might never fight him now. And if Valuev wins? Haye becomes just another heavyweight.

Antonio Escalante: The Mexican-born adopted son of El Paso, Texas not only remained on track to receive a title shot in the near future by easily outpointing a good fighter in Cornelius Lock, he did it in dominating fashion and in front of enthusiastic hometown fans at the Don Haskins Center. Escalante ran his winning streak to seven – beginning after he was stopped by veteran Mauricio Pastrana in 2007 – and much bigger things appear to be in his future.

Roy Jones Jr. vs. Jeff Lacy: Listen, these guys are grown men who have a right to make a living in any way they choose. That doesn’t mean we have to like it, though. Jones is one of the greatest fighters of all time. Now, reduced to wearing a Pirate outfit to help sell his fight against Lacy on Aug. 15, he is merely using his name to make as much money as he can. We were once excited about Lacy. And then he was reduced by Joe Calzaghe to just another fighter with a big name, which he also is milking for all its worth until he’s knocked out the next time. How did we end up here?

Manny Pacquiao vs. Miguel Cotto: Fans seem to be going nuts over this fight. The majority of them believe the world’s No. 1 fighter pound for pound will continue his amazing roll and beat Cotto. Those who disagree are just as passionate. Only one thing seems to be certain: This is the type of fight the fans crave, a competitive matchup of two very talented and aggressive fighters at or near their primes. I personally would rather have seen Pacquiao fight Shane Mosley, who I think is better and more-exciting than Cotto. However, I’m not alone in relishing this wonderful consolation prize.

Sam Peter: The former heavyweight titleholder did a nice job in his first fight for his new promotional firm, Top Rank, knocking out Marcus McGee in the third round. The problem: It was Marcus McGee. Peter was coming off consecutive losses to Vitali Klitschko and Eddie Chambers in which he looked so horrible it was next to impossible to imagine him bouncing back. His performance on Saturday was a positive sign but we shouldn’t get carried away. Let’s see how he does against a legitimate threat. If he has anything left, rest assured that Bob Arum will get him the opportunities he needs to make the most out of it.

Buddy McGirt, about Vernon Forrest: “I never thought Vernon would die like that. He wasn’t a street-type of guy. That’s what hurts so much. He was not one to be out in the streets. He lives out of town (in Atlanta), out in the woods. He would hang out and have fun, don’t get me wrong, but he wasn’t out partying and drinking. It’s heartbreaking. No one expected him to die early. No one expected him to die like this.”