The other brother is on the rise 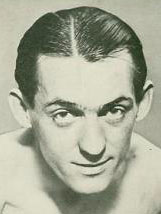 What: Fight Night Club, a monthly boxing series featuring rising prospects at Club Nokia in downtown Los Angeles
Who: The featured young fighters hail from Southern California and beyond and all of them have the potential to be successful.
When: Thursday, July 30.
TV/Internet: The card will be televised on Versus and streamed live on RingTV.com and Yahoo! Sports. The first fight begins at 6 p.m. PT / 9 p.m. ET.
Future shows: Aug. 27 and Sept. 24 at Club Nokia, which is adjacent to Staples Center.

Carlos Molina is the other brother.

The lightweight boxer’s younger twin siblings – Javier and Oscar – made names for themselves as amateurs in their hometown of Commerce, Calif., and beyond. Javier fought for the United States in the 2008 Olympics and is 2-0 as a pro while Oscar continues to fight for Mexico as amateur.

Carlos had a fine amateur career — he believes he had a record of about 120-18 – but turned pro in 2007 under relatively anonymous circumstances.

Does that bother him? Not a bit. He and his brothers couldn’t be tighter; if they’re happy, he’s happy, he said. Besides, he’s right where he wants to be: Undefeated as a pro and, after signing a contract on Tuesday, a Golden Boy Promotions fighter.

“I actually had the Olympic dream,” said the eldest Molina brother, who will face Colombian Ever Luis Perez in a four-round lightweight bout on the “Fight Night Club” card Thursday at Club Nokia in Los Angeles. “I wanted all that. After I sat down and really thought about it, though, what I really wanted was to become a world champion.

“That was my main goal, to be a world champion.”

Javier, who fights for Goossen Tutor, probably has the highest profile after competing in the Olympics even though he had a disappointing experience in Bejing. He fought even though he was ill, proving how tough he is, but lost his opening-round fight.

Oscar narrowly missed making the Olympic team of his parents’ native country but continues to fight internationally and plans to pursue a spot on Mexico’s 2012 team.

And Carlos, 23, will do what he can to support both of them. He said he wants his 19-year-old brothers to succeed so badly that it’s difficult to watch them fight.

“When I fight, I get the jitters, I get nervous,” he said. “It goes away once the bell rings, though. When my brothers fight, man, it doesn’t ever go away. Oscar is going to fight in a tournament in Mexico City, against a Cuban. I’m nervous about that one already.

“I’m happy for them. I really don’t think I could be happier if it had been me.”

Carlos and his amateur trainer, Robert Luna, agreed that his style was always better suited for the pros. He was more interested in throwing hard, punishing blows than a high volumn of punches, which isn’t the best strategy in the amateurs. And he had his own family, including two kids, which was another obstacle.

Those close to the Molinas say that you shouldn’t jump to conclusions about Carlos because he wasn’t quite as successful as his brothers as an amateur.

Carlos (7-0, 3 knockouts) is still learning but is a complete boxer-puncher who also is very tough mentally, according to Luna, who has worked with all three and still trains Javier. His manager, Frank Espinoza, said Carlos reminds him of Miguel Cotto.

Golden Boy and Espinoza, who demands that his fighters be gentlemen, also like Carlos as a person. He’s clean-cut and soft-spoken, the kind of fighter that won’t cause problems along the way. Someone joked that no one would mess with the Molina family. He just laughed shyly and said, “We don’t have too many enemies but we have a lot of friends.”

Luna was asked which of three brothers will go the furthest?

“Honestly, I look at all three the same way,” he said. “It’s too difficult to separate them. They all have tremendous ability. I really believe all three will make it to the top and become world champions, even pound for pound, all of it.

“When you see them, you’ll understand. All three are very, very talented.”

Carlos knows he must be patient. The last thing he needs is to be rushed into a big fight too soon, even with his vast amateur experience.

However, he thinks he knows what he’s made of but is eager to prove it to himself against top-level competition. After each fight, assuming he passes the test, he wants to move up to the next level.

“I do want to jump in there and see what I have,” he said. “I don’t want to be one of those fighters with 25 fights and no title shots. I don’t know if I want to do what Oscar (De La Hoya) did, fighting for a title in his 12th fight. I want to do something like that, though. One of the guys in my gym, Alfredo Angulo, has only 16 fights and he’s already up there.

“For now, I’ll how I feel in my fights and go from there. Things are going. And I think they’re only going to get better.”

If so, his brothers undoubtedly will be happy for him.