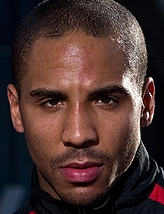 The cover of the December 1999 issue of KO magazine, the longtime sister publication of THE RING, featured photos of Fernando Vargas and David Reid, with the headline “Olympic Teammates On A Collision Course!” Both 1996 U.S. Olympians seemed to be entering their primes and it appeared a given that they would fight someday. But “someday” could wait because they were both young, the money wasn’t right yet, it could be worth many millions to both fighters in a couple of years if built properly, etc.

Unfortunately, losses to Felix Trinidad weren’t part of the “built properly” plan, and the fight never happened. And that’s often how it is with two young, undefeated fighters: The showdown doesn’t happen because it’ll be more lucrative once they’re both at the top of the division, and before you know it, the fight has no value. If you’re looking for a more recent example, try James Kirkland and Alfredo Angulo, two 154-pounders rising side-by-side the last couple of years who would have made for a compelling Boxing After Dark pairing until one of them landed in jail and the other one landed in the loss column.

Of the dozens of plot points making Showtime’s super middleweight “Super Six” tournament endlessly fascinating, perhaps the most compelling is this: Andre Ward and Andre Dirrell are undefeated, exceptionally promising “Olympic teammates on a collision course,” and for once, the collision is actually close to becoming reality. Although Showtime didn’t officially announce the second- and third-round matchups, trustworthy sources reported that America’s only two medalists from the 2004 Olympics will fight in the third phase of the round-robin segment of the series, provided both are physically able to do so.

Ward’s best pro opponents so far have been Edison Miranda, Jerson Ravelo, Henry Buchanan and Rubin Williams. Dirrell’s have been Anthony Hanshaw, Victor Oganov and Curtis Stevens. In the first round of “Super Six,” Ward faces the No. 1 super middleweight in the world, Mikkel Kessler, and Dirrell faces the No. 3 man, Carl Froch. The leap in competition that the Andres are taking is as steep as anything we’ve seen since Pete Rademacher turned pro against then-heavyweight champ Floyd Patterson, especially when you consider that they’ll follow those fights with at least two more consecutive fights against opposition on that same elite level.

And that, coupled with the promise of a Ward vs. Dirrell match in round three, is why the two young Andres are the most intriguing wild cards in this event.

“If you’re Andre Dirrell or Andre Ward and you run the normal course in boxing,” said analyst Al Bernstein, who’ll call the Super Six action for Showtime, “you might face an (Arthur) Abraham or a Froch or a Kessler and that would be your championship fight, and then you’d probably have a lesser fight next. You wouldn’t have three fights in a row that are all dramatically difficult. That’s the part that makes this such a supreme test.
Whoever comes out of this tournament, the person that wins this, will have accomplished something that borders on greatness.

“It is a mistake to think that Ward and Dirrell are so far out of their league that they can’t compete against these opponents. However, the burden of proof is clearly on them. And we’ll find out a lot about their chances of winning it all in the opening round.”

All three Americans in the tournament will likely be underdogs in the first round. Jermain Taylor faces Abraham and is coming off a knockout loss to Froch, which has helped make him the consensus longest shot to win the Super Six. And the Andres are just so unproven relative to their European opponents that it’s hard to favor them.

Naturally, Ward, Dirrell and the people around them don’t see it that way.

“I know I am in a blessed position and the position to be the best of all-time,” Dirrell said at the presser to announce the event. “I love being the underdog. I am going to be in the finals. ÔÇª Froch is tailor-made for me. He hasn’t showed me anything. I think this will be my easiest fight. ÔÇª My concern is not getting cut. I am naturally gifted and I will let the world know who I am.”

“I think (Ward) will be achieving his greatness in the tournament and he will be the winner of this tournament,” said Ward’s promoter, Dan Goossen. “Andre has been on the biggest world stage of any of these athletes. It doesn’t get any bigger than the Olympics, and he overcame all of the odds on becoming the only gold medalist for the U.S. (in 2004). And we believe that he is ready to go front and center on the professional world stage and be able to do what Muhammad Ali, Sugar Ray Leonard and Oscar De La Hoya did after winning gold.”

The Olympic experience that links Ward and Dirrell with the legends listed by Goossen could prove to be a major factor in their hopes of unseating far more battle-tested opponents. They’re used to fighting on foreign soil, they’re used to taking on elite opposition, and they’re used to tournament formats in which you don’t hand-select your next opponent. Granted, there’s no headgear this time around and the fights are scheduled for 36 minutes, but amateur experience still counts considerably when it’s time to step up as a pro.

And the fact that Ward and Dirrell were Olympic teammates will count considerably when it comes time to market their eventual showdown.

In modern history, fights between U.S. Olympic teammates have been rare. And never have they been ideally timed.

When Evander Holyfield defended his cruiserweight belt against 1984 Olympic teammate Henry Tillman in ’87, Tillman had already been upset by Bert Cooper eight months earlier and the title fight was a mismatch that ended inside seven rounds. Todd Foster and Kelcie Banks, teammates in 1988, squared off in ’92, but Banks already had three defeats, Foster had two, and very little other than pride was at stake in their 10-rounder. And Jermain Taylor vs. Jeff Lacy would have been a big deal in 2005 or 2006, but by the time the ’00 Olympic roommates fought last year, all of the shine was off Lacy and Taylor wasn’t exactly riding high himself, having just lost two in a row to Kelly Pavlik.

Then there are the Olympic teammate fights that never happened, such as Vargas vs. Reid, De La Hoya vs. either Raul Marquez or Vernon Forrest, or Riddick Bowe vs. Ray Mercer.

Barring injury, Ward vs. Dirrell will happen. What remains to be seen is whether either of them will still be undefeated when it happens and how perfect or imperfect the timing will turn out to be.

“The problem with handicapping that fight right now is they will be different fighters by the time they fight each other in the third round,” said Bernstein. “They could be much better fighters because of the experience against better competition, or they could be slightly eroded, couldn’t they? Could they get knocked out, could they get hurt, could they have to go through two 12-round wars? I don’t think we’re going to see a lot of quick knockouts, maybe not any, in this tournament, so the chances are they’ll have had two grueling fights.

“But if I had to handicap those two against each other, right now, it’s about the speed of Dirrell against the steady pressure and consistency of Ward. Honestly, we do not know how Dirrell is going to be against top competition. With his hand speed and foot speed, if he can take a punch sufficiently, he has the potential to be truly amazing. But he’s the greenest of the bunch, the biggest unknown. And Ward would be next on that list. It’s a perfect example of how fun this tournament is, because we might not otherwise see these guys against each other so quick. Normally, they might go win other titles and they would take forever to get back to fighting each other. That’s just the way it works.”

Maybe, in a post-Super-Six world, that’s not the way it will work anymore. If this tournament is an overwhelming success, it might set in motion a change in the way business is done at the top level. It might lead more world-class fighters to enter tournaments like this and face greater risks in order to establish themselves as the best in their division.

Ward and Dirrell are taking a risk that is arguably unprecedented in the sport, stepping up from journeyman opponents to the elite level with a maximum degree of difficulty.

All of the fighters in the Super Six are taking an enormous gamble, but at least the other four have been to the mountaintop already.

Ward and Dirrell are still hoping to get there, and fortunately for boxing fans, they’ve chosen the path of most resistance. And best of all, they have each other standing in their way.

ÔÇó Whether you love Teddy Atlas as a commentator or you hate him, you have to appreciate the entertainment he brings into our lives when he gets his clich├®s confused. Teddy gave us perhaps his greatest line yet on Friday night when he referred to Miguel Vazquez as “skinny as a drink of water.” I wonder what Teddy pays George W. Bush to write his dialogue for him.

ÔÇó Note to judge Dave Moretti, who saw Breidis Prescott a 97-92 winner over Vazquez: You might want to consider waiting until after the fight to fill out your scorecard next time.

ÔÇó Tavoris Cloud’s people turned down a two-fight deal with HBO and got an ESPN2 co-feature slot instead. Ishe Smith, who couldn’t get a fight on ESPN2 a few weeks back, will likely be fighting on HBO next month. Funny how the world works sometimes.

ÔÇó Forty years old and trying to sell a fight that nobody cares about by donning an embarrassing pirate outfit? This is not the way Roy Jones’ career was supposed to end.