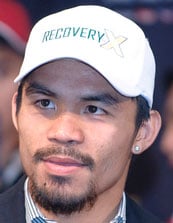 Manny Pacquiao will fight Miguel Cotto on Nov. 14 at the MGM Grand in Las Vegas, Bob Arum, Pacquiao’s promoter, announced Monday.
The fighters agreed to meet at 145 pounds, a catch weight between junior welterweight and welterweight, according to a newspaper in the Philippines.

The newspaper, the Manila Bulletin, reported that a long-distance call from Arum to Pacquiao over the weekend convinced Pacquiao to give his OK.

Apparently, Arum, who also promotes Cotto, was able to give Pacquiao more-favorable financial terms. That might be what persuaded him to agree to 145, which had been a point of contention.

Pacquiao is coming off a sensational second-round knockout of Ricky Hatton on May 2. Cotto survived a horrible cut to narrowly outpoint Joshua Clottey last month.