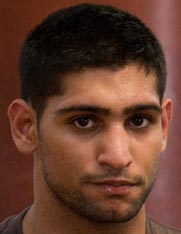 Amir Khan regularly slipped punches through the guard of Andreas Kotelnik on Saturday in Manchester, England. Photo by FightWireImages.com from ClevaMedia.com

MANCHESTER, England – Amir Khan is not the finished article nor is he equipped as yet to threaten Manny Pacquiao’s supremacy at light welterweight, but the 22-year-old British boxer confirmed his potential as a future star as he won the WBA title at 140 pounds from Ukraine’s Andreas Kotelnik at the MEN Arena.

Inside Ricky Hatton’s old fortress, Khan demonstrated the nerve and skills that convinced trainer Freddie Roach to take him under his wing just weeks after the 2004 Olympic Games silver medalist had been knocked out in 54 seconds by powerful Colombian puncher Breidis Prescott in September 2008. Now Khan could even be Hatton’s next opponent after completing his rehabilitation with a points victory via unanimous decision over Kotelnik.

One judge awarded him every round, scoring 120-108, while his two colleagues both saw it 118-110, giving the Ukrainian two rounds. Khan’s victory was beyond dispute and he boxed exactly as Roach had predicted he would, utilizing the superior speed of his legs and natural athleticism to prevent Kotelnik from applying pressure, which he needed to do to have any chance of pulling off an upset win. Khan threw 878 punches and landed 170 while Kotelnik connected with only 80 of 463 punches thrown.

“I got tired around the 10th round but I stayed composed and I never doubted that I would pull this off,” Khan said after his 21st victory. “The work I’ve done over the past two months in Freddie Roach’s gym in Hollywood (Calif.) has paid off. We knew that Kotelnik would be tough and he was, but we also knew that speed would be the key. I boxed well, I fought aggressively and I’m overjoyed with this win.”

Prince Naseem Hamed was at ringside to support his friend and the former world featherweight champion witnessed an assured display. With another of boxing’s leading young guns, Victor Ortiz, having been knocked out in six rounds by Argentina’s Marcos Rene Maidana only three weeks ago, Khan knew that the stakes were high against his 31-year-old opponent, but he took the fight to Kotelnik from the outset, stayed on top throughout and produced a mature performance, which augured well for his future. “There are things that we need to work on, of course, but Amir can only get better,” Roach said.

Khan’s jab rattled regularly into Kotelnik’s face in the opening rounds as the Ukrainian stayed mostly on the defensive. The Briton’s defense was solid and the lateral movement he employed to stay out of range when Kotelnik punched worked well. He left his chin unprotected a couple of times and Roach warned him at the end of the first round not to “lead with the right hand and work behind the jab,” but Kotelnik caught him only with glancing blows for most of the first two rounds.

There were ominous signs for Khan in round three, however, when Kotelnik penetrated his guard more than once with the right hand. One alarming burst of punches by the Ukrainian included a right hand to the head and two left hooks, and he landed another solid right hand before the round was over. Khan’s chin was tested again in the third round and Kotelnik mixed in body shots, too, as the challenger allowed his foe more latitude to get off with his punches.

The flow of the fight changed discernibly in the fourth when Khan’s punch output dropped and Kotelnik took advantage by attacking to the head and body. Khan was encouraged to cover up and get on his bicycle, circling to his right and away from Kotelnik’s dangerous right hand. Kotelnik landed a right and a follow-up straight left, both of which appeared to rattle the challenger, who responded well in round five, using his legs to avoid getting caught and pumping out his jab to score more points.

Boxing on the back foot, Khan picked off his opponent impressively in rounds six and seven and with his work-rate back up the momentum swung his way. A right uppercut and left hook combination to Kotelnik’s head emphasised Khan’s superiority, and when the Ukrainian responded with a left hook to the head, he got countered immediately by a sharp battery of blows. Khan’s confidence soared.

Kotelnik remained dangerous, however, and Khan was struck flush on the chin with the left hook and right hand on several occasions in the ninth. Khan threw more punches but the Ukrainian’s counterpunching ability was still apparent and won him the round. Khan was in charge but by no means was he able to coast. Although he outworked Kotelnik in the 10th and 11th rounds, the 31-year-old remained strong and the final round became a test of Khan’s nerve as he had to avoid a series of big blows for three more minutes. Kotelnik knew he needed a knockout to win and his sustained assault lacked the required accuracy, so Khan was able to box and avoid most of Kotelnik’s crude blows before the final bell rang.

“That was a great performance and Amir has a great future ahead of him,” said promoter Frank Warren. “We'll decided over the coming weeks where he goes from here.”

On the undercard, featuring Britain’s Olympians from the 2008 Games in Beijing , James DeGale ripped through Belfast’s Ciaran Healy with a vicious body attack to win his third professional bout at 2:59 of the first round. “I didn’t even get out of first gear and there is so much more to come,” said the 23-year-old from London, who won a gold medal at middleweight. Billy Joe Saunders, a bronze medal winner at welterweight who lives in a travelers’ encampment in Hertfordshire, stopped Nottingham’s Matt Scriven in the second round, while Birmingham light welterweight Frankie Gavin, who was forced to pull out of the Olympics because of weight-making difficulties, also secured a second round win over Graham Fearn from York.

Enzo Maccarinelli, the former WBO cruiserweight titleholder from Swansea, suffered a third round stoppage defeat against unbeaten Russian Denis Lebedev and acknowledged that his 10-year career could be over. “I don’t seem to have it any more and that may be the end,” said the 28-year-old. Maccarinelli was stopped by Londoner David Haye in two rounds last year before being knocked out by another Londoner, Ola Afolabi, in the ninth round four months ago.