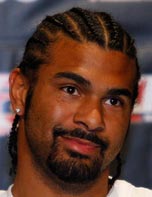 If you Google the phrase “would you rather,” you’ll find all sorts of questions ÔÇö some of them clean enough for publication on this web site, some not ÔÇö seeking to find the lesser of two evils. Some examples: Would you rather have a missing finger or have an extra toe? Would you rather change your name to Jeffrey Dahmer or Osama Bin Laden? Would you rather immerse your naked body in a bathtub of cockroaches or dive naked headfirst into a pool of tobacco spit?

Thanks to David Haye, we can now add this one to the list: Would you rather take a beating from Wladimir Klitschko or Vitali Klitschko?

Haye was slated to fight younger brother Wladimir in June, but he pulled out claiming a back injury, and is now scheduled to fight older brother Vitali on September 12.

Haye is a fast, skilled, hard-hitting former cruiserweight champion of the world; it’s entirely possible that he would have beaten Wladimir and will beat Vitali. But “possible” isn’t the same thing as “probable.” Almost any boxing expert will agree that Haye is a clear underdog against either Klitschko. And that’s not a knock against Haye. Name any current heavyweight contender, and the Klitschkos would both be heavily favored to beat him.

The question is, in switching from fighting Klitschko A to Klitschko B, has Haye just transformed himself from a big underdog to an even bigger underdog? The consensus opinion across the boxing world is yes, Haye’s difficult task just got a little closer to impossible.

“I would say Haye’s chances got worse,” said Jay Deas, the trainer of heavyweight prospect Deontay Wilder. “Even though Vitali doesn’t have quite the skill set that Wladimir has, he’s got more of what you would need to beat David Haye.”

“If I was Haye, I would have wanted to stick with fighting Wladimir,” said Chris Byrd, the world’s foremost expert in fighting against Klitschkos, with a 1-2 career record against the brothers. “He has more of a puncher’s chance against Wladimir. Vitali is so unorthodox, he’s just a harder guy to fight.”

The one person who seems to disagree is Haye himself. As co-promoter Richard Schaefer told RingTV.com editor Michael Rosenthal last week, “We’ve thought from a style standpoint, from a winning point of view, Wladimir was a better matchup, but David always pushed more toward Vitali.”

Perhaps Haye’s preference was based on the notion that was popular a year ago that Vitali was a physically broken-down fighter, a rusty, cut-prone, injury-prone former terror. But two dominant victories into his comeback after a 46-month layoff, the elder brother has disproven those presumptions and established that there’s nothing “former” about his terror status.

“I could see Haye thinking he can take advantage of Vitali’s inactivity,” said Deas. “Vitali’s comeback win over Sam Peter reminded me of when [Felix] Trinidad or Oscar [De La Hoya] fought Ricardo Mayorga and everyone said, ‘He’s back!’ I’d say, ‘No, don’t base it on that, Mayorga has a way of making that level of fighter look great.’ Same with Sam Peter for Vitali, you can’t base too much on that. So maybe Haye thinks Vitali is still vulnerable.

“But matchup-wise, Haye is a lot worse off. Against someone like the Klitschkos, his best opportunities are going to be in the first three to four rounds of the fight, and you could see him getting systematically worn down from then on. Haye could have maybe gotten a good shot in against Wladimir. Corrie Sanders jumped on him and caught him with that good shot, and was able to break that comfort zone, which is what you have to do against Wladimir. Make him as uncomfortable as you can. I think Vitali has a stronger mental constitution, he’s just tougher and takes a better shot. It’s harder to get him in trouble with one big punch.”

Byrd seems to respect Wladimir’s offense a bit more ÔÇö he told RingTV.com that the younger brother is the harder puncher ÔÇö but he respects Vitali’s defense more. He served as a sparring partner for Vitali as the elder Klitschko prepared to fight Juan Carlos Gomez this year, and he came away with a new level of appreciation for the big man’s intelligence.

“With Vitali, you’re dealing with somebody close to 6-foot-8, athletic, and just a very smart guy in the ring,” Byrd said. “He uses height and range really well. And he’s just so unorthodox. He was a kickboxer first, whereas Wladimir just did pure boxing, and I think that gives Vitali a different style. The key is, Wladimir will look for a knockout more than Vitali will, which means he might leave openings. Vitali doesn’t look for a knockout, he just breaks you down. And he adapts well during a fight, I was impressed with that in sparring.”

So if Vitali is going to adapt, should Haye adapt his style to fit the situation? Haye is naturally an aggressive puncher, but he’s also quick-handed and much more nimble on his feet that the Klitschkos. So should he try to emphasize speed, darting in and out and trying to pile up points?

“I think the worst thing you could do with Haye is have him running around the ring, throwing jabs and all that,” Deas said. “You do what got you there. I don’t think you can change Haye. He’s drama personified. He enjoys putting it on the line, and that’s what he does best. I think he hits hard enough to hurt anyone. If I was training Haye, I’d turn him loose.

“One other thing I’d do in training, I would have Haye carrying a 100-to-140 pound heavybag in the ring while he does his footwork, where you’re putting a big ol’ bag on your shoulder and having to move around the ring with it. That would help to get him in the right shape for fighting on the inside and having a big guy leaning on you.”

Scully agrees that Haye needs to make it an inside fight against Vitali and needs to be prepared to go to hell and back in order to win.

“Both Klitschkos are so big and their lefts are so long, it’s hard to box a guy like that on the outside,” Scully said. “I would think you want to be on the inside, fighting hard, make it a dogfight. When Joe Frazier got inside, that was the true essence of the term ‘work the body.’ He worked it, consistently and constantly. Joe got inside and you could tell he was trying to break your ribs. Other guys think ‘work the body’ means throw a couple to the body and then get back out, then try to get back in and throw a couple more. Haye would have to be in the eye of the storm, working the body, trying to just outpunch him, be more of a volume puncher. He has to fight like Marlon Starling did when he beat Mark Breland. ‘Moochie’ took the chance of being roughed up in order to rough Breland up. If Haye stays on the outside, sooner or later, the clock is ticking, he’s going to get caught with something.”

On ESPN2’s Friday Night Fights this past weekend, in announcing the news that Haye and Vitali had signed to fight each other, studio host Brian Kenny referred to Vitali as “the bodyguard” for his brother. It calls to mind the middleweight division of the 1980s, when Robbie Sims occasionally stood between his half-brother, Marvin Hagler, and “The Marvelous One’s” potential challengers.

Wladimir has the better recent resume and is recognized as the current top dog in the division by anyone who compiles credible rankings. But nearly everyone ÔÇö this writer included ÔÇö agrees that Vitali presents the more imposing challenge for Haye. Wladimir is THE RING champion, which means that defeating him comes with greater reward. But fighting Vitali comes with greater risk.

Maybe the “would you rather” question isn’t “Would you rather fight Wladimir Klitschko or Vitali Klitschko?” That’s too easy to answer. Maybe we need to handicap the situation, giving us the more compelling question, “Would you rather go through with the Wladimir fight with a bad back, or be 100 percent healthy and fight Vitali instead?”

The Experts Set The Odds

Our panel of experts for this article reveal the odds they would set for Haye vs. both Klitschkos:

┬À More than any other fighter, Arturo Gatti was responsible for me becoming a hardcore boxing fan. His passing over the weekend at the age of 37 was by far the most upsetting news I’ve received in my 12 years as a boxing writer. For what it’s worth, Arturo can rest in peace knowing that for the next 100 years, any exciting new fighter who comes along will immediately cause commentators to invoke Gatti’s name. And he can rest in peace knowing that any such comparisons regarding drama and thrills will end unfavorably for the other fighter.

┬À Not helping Gatti rest in peace: The memorial 10 count delivered on Showtime’s Saturday broadcast grouping Gatti and Alexis Arguello with Michael Friggin’ Jackson. I don’t care if Don King organized the Jacksons’ reunion tour, introduced Jackson to Bubbles the chimp or personally put out the fire in Jackson’s hair on the set of the Pepsi commercial; to lump Michael Jackson in with Gatti and Arguello on a boxing broadcast was downright distasteful and disrespectful.

┬À Rhetorical question number one: Does any fighter lose his form and technique more quickly than Vic Darchinyan after he gets tagged?

┬À I’ve long considered Telis Assimenios a shaky referee (ever since the David Tua-Hasim Rahman debacle in 1998), but he did nothing wrong at the conclusion of the Antonio DeMarco-Anges Adjaho fight on Saturday night. Adjaho has only himself to blame for the loss. Basic rule of thumb: Whether you think you were fouled or not, if you’re physically capable of getting up and you hear the referee counting your ear, get up first and complain about the foul later.

┬À I hate to say it, but I think jail is the only place Johnny Tapia can possibly keep clean, keep from killing himself, and keep from putting anyone else’s life in danger.

┬À Maybe I was too quick to suggest in last week’s column that the Showtime super middleweight tournament would work better as an eight-man single elimination. Hearing all of the round-robin matchups, I’m legitimately geeked for this. It’s still going to be tough to pull off as planned with the potential for injuries and other snafus, but Showtime gets huge points for the effort no matter what.