One loss doesn’t necessarily mean all is lost 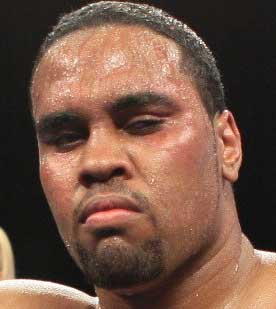 Aside from a common first name and a common profession, there isn’t a whole lot uniting Victor Ortiz and Vic Darchinyan.

Ortiz suffered his first pro loss at age 18 and his first high-profile loss at 22. Darchinyan didn’t taste defeat until the age of 31.

Darchinyan lost in the purest way possible, getting iced by a punch from Nonito Donaire that he never saw. Ortiz lost in a way that makes the purists sick, quitting against Marcos Maidana the moment he decided he wasn’t going to win.

But despite all of those dissimilarities, Ortiz and Darchinyan do share one important bond: They both know what it’s like to be doubted and dismissed, to be told they can never rebound and rebuild.

Darchinyan, who fights Joseph Agbeko this Saturday on Showtime in what is expected to be a thriller, stood just two short years ago where Ortiz stands now. And Darchinyan undid all of the damage and proved wrong the doubters in shockingly short order. Ortiz faces a stiffer challenge because of the way he bowed out, but Darchinyan serves as an important reminder that no matter how unpleasant the circumstances behind your loss, coming back is always possible – if you want it badly enough.

“It’s all about him, how tough he is in his mind,” Darchinyan said about Ortiz in an interview last week with RingTV.com. “He needs to realize his mistakes and work on his mistakes. He rushed too much. He should have taken his time when he knocked his opponent down. If he can learn, and if he is tough in his mind, he can come back. Remember, he’s a kid still, he’s 22 years old, he has to grow up.

“He was in with a fighter with a good knockout record. Maybe he realized [Maidana] had a big punch and he should quit, quit and come back better another time. Of course, that’s not me. I can’t do that. I’m not a kid, and I never can quit. I have to go all the way.”

In looking to explain why Ortiz wanted out of his fight with Maidana and why he spoke honestly (but foolishly) afterward of how he didn’t deserve to take a beating, many observers, like Darchinyan, are citing his youth. Ortiz hadn’t yet experienced professional adversity like this. At just 22, he didn’t understand how his comments would be received.

And according to veteran trainer and former junior welterweight contender Ronnie Shields, that youth must be taken into consideration when trying to bring Ortiz back.

“He’s a young guy, they stepped him up too fast, and he wasn’t ready for the step-up,” Shields said. “He quit in the fight. He didn’t want to get hurt, and you’re in the wrong business if you don’t want to get hurt. But the fact is that I think the kid is a really good fighter. He can come back from this. They just need to bring him back slow. If you bring him back too fast, you’re gonna hurt him. He can’t take another loss right now. His promoters need to get him a couple of easy wins. Then you try him against like a top-20 guy, and you see where he’s at then. Then maybe you try him against a Top-10 guy. You don’t step him right up again; you take a step back first. I don’t see what the rush is with a young kid like this.

“Being an ex-fighter myself, I realize that he’s going to have a lot of self-doubt right now. People saying he can’t take a punch – that’s going to be on his mind. If they put him in with another puncher in his next couple of fights, he’s going to get knocked out again, and that’s going to destroy his career.”

Shields has experience rebuilding promising fighters, most recently with welterweight and junior middleweight contender Kermit Cintron. The hard-punching Cintron was fresh off his second convincing knockout loss to Antonio Margarito when Shields took over, and the Houston-based trainer realized immediately that there was a lot of work to be done.

Cintron not only had confidence issues, but he also had to learn new approaches to training and fighting.

“Every fight I had seen Kermit fight, he was trying to knock the other guy out. He was making every shot a killer shot, and that was hurting him real bad, he was getting tired. I told him, ‘You got a great jab, you just don’t use it.'”

Over the first 31 fights of his career, Cintron never went the 12-round distance once. In his three fights with Shields, against Lovemore Ndou, Sergio Martinez and the previously unbeaten Alfredo Angulo, Cintron has gone 12 rounds every time. In the most impressive of those performances, against Angulo, Cintron and Shields mistakenly trained for a 10-round fight and found out a week before the bout that it would be a 12-rounder. So Cintron had to take a few of the later rounds off, but he paced himself properly and won a unanimous decision.

“His confidence now is way up there,” Shields said. “I had to make changes mentally, physically and everywhere in between, and you’ve seen that it can be done.”

It’s been done quite a few times throughout boxing history. In recent years, both Klitschko brothers, Wladimir and Vitali, have done it, the former rebounding from two disastrous knockout losses, the latter from a harshly criticized quit-job. Both were gradual reclamation projects that have panned out tremendously. Bernard Dunne and Amir Khan, a pair of fighters from the U.K., both suffered devastating first-round knockout losses in the last couple of years and were roundly dismissed, but Dunne came all the way back with a sensational win over Ricardo Cordoba in March, and Khan appears on the road to recovery under the tutelage of Freddie Roach.

There certainly was no more famous rebound from a shocking first loss than Joe Louis, who crumbled in 1936 against Max Schmeling, leading some to label him a phony who would never make good on his high expectations. But his management took a gutsy comeback route, putting him in with another ex-champion, Jack Sharkey, just two months later. “The Brown Bomber” won inside three rounds, kicking off a 33-fight, 14-year winning streak.

Of course, for every success story, there are tales of promising fighters who suffered one painful loss and never got back on track. Recent examples that come mind include Francisco Bojado, Audley Harrison and Michael Grant. At least in Grant’s defense, his loss came at the highest level, in a heavyweight title shot against Lennox Lewis. That gives him something in common with Gerry Cooney. After Cooney came up short against Larry Holmes, he was inactive for 27 months and never really mattered again, unless you count a couple of high-profile knockout losses to Michael Spinks and George Foreman.

For Darchinyan, in the immediate aftermath of his loss to Donaire, it was reasonable to suspect that he would never matter again either. Instead, two years and five fights removed from a crushing knockout defeat, he’s on almost every pound-for-pound list. And the loss helped him get there.

“It pushed me harder to show all the world that I am better than that,” he said. “I have all the power and skills, but I was trying that fight [against Donaire] to use all of my power, and it was a mistake. But I never doubted myself, I still knew I would beat everyone I fight if I use my power and my skills. And you saw it with (Cristian) Mijares, and (Dimitri) Kirilov, and (Jorge) Arce, I showed my skills. I can dominate a fight with my skills and then knock them out with power.”

Darchinyan is a rare case of a fighter so self-assured that he never wavers. With that in mind, maybe we shouldn’t have been so surprised to see him return from his knockout loss better than ever.

Ortiz’s mental state is decidedly less clear-cut. Does he even want to make his living in this brutal business? And if so, can he convince himself that he’s still championship material? His team at Golden Boy Promotions can do all the damage control they want, but they can’t take back what he said in the ring. He did quit, and he did admit that he’d reached his punishment threshold. He needs a mental makeover if he’s going to rebound from this defeat.

But if he looks at Darchinyan and others, he’ll see that no matter how low a fighter sinks, no matter how discouraging the loss he suffers, if he has real talent and wants it badly enough, one defeat isn’t the end. In fact, it can sometimes be just the beginning.

ÔÇó Love him or hate him, Darchinyan is a true character. As I was trying to hang up the phone at the end of our interview, he was yelling into the phone, “I’m going to knock out everyone!” Some fighters try to create unique personas for the cameras (see “Money” Mayweather). Others are just plain unique.

ÔÇó It’s a shame when a fighter scores a meaningful win, as Cintron did against Angulo, and can’t land a similarly meaningful follow-up fight. The fight Shields really wants for Cintron is Shane Mosley, and with Sugar Shane stuck in the same boat following arguably the best win of his career, I say why not? It beats the hell out of both guys sitting out the rest of 2009.

ÔÇó Considering that I just last week proposed a tournament at 168 pounds to determine a legitimate champion, I’m obviously on board with Showtime’s super middleweight tourney idea. Two thoughts: First, I’d say Lucian Bute needs to be a part of it for an undisputed king to emerge, but if it’s true that his people were offered inclusion and declined, then I say proceed without him. And second, as compelling as this idea is, a tournament that takes two years or more to complete is problematic. A time frame like that increases the chance of injury getting in the way, increases the chance that someone won’t be able to make 168 pounds by the time it’s over and also increases the chance that a worthy new force will emerge at super middle between the start and end of the tournament and not be a part of it. My advice to Showtime: Ditch the round-robin aspect, add two more worthy fighters, make it an eight-man single-elimination tourney (with the fighters seeded based on RING ranking order), and try to wrap it up within 12 months.

ÔÇó Yes, the patriot in me was psyched to see American Eddie Chambers upset Germany-based Ukrainian Alexander Dimitrenko on the 4th of July. But there’s a much bigger reason I enjoyed this result: Because it reminds the people who overemphasize the importance of size that the great 200-pound heavyweights of the past would have done just fine against the 250-pound behemoths of today. No, Dimitrenko isn’t half the fighter that Lennox Lewis or the Klitschkos are. But Chambers isn’t half the fighter Muhammad Ali or Joe Louis were.

ÔÇó As presumably the world’s only professional boxing and poker writer, it’s my duty to inform you that Winky Wright has kept up the proud tradition of pro fighters performing poorly in the World Series of Poker main event, lasting only a couple of hours on Saturday. So apparently Winky’s luck with cards isn’t any better than his luck with boxing judges.