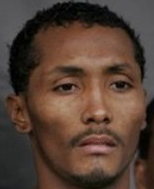 Moreno, who exploited significant height and reach advantages over the always aggressive Monshipour, won by scores of 116-112 and 116-113. One judge scored the bout 115-112 for Monshipour, an Iran-born resident of Poitiers who is very popular in France because of his all-action style.

However, Monshipour's pressure fighting tactics were not enough to take the 118-pound title away from the skilled southpaw from Panama, who employed his usual stick-and-move strategy.

Moreno (26-1-1, 8 knockouts) is THE RING's No. 2-rated bantamweight. Monshiour, who made five defenses of the WBA's super bantamweight title before losing it to Somsak Sithchatchawal in the Fight of the Year for 2006, was unrated by THE RING.

Monshipour (31-4-2, 21 KOs) retired for more than two years after his punishing fight with Sithchatchawal but began a comeback last December, winning three bouts in a row before losing to Moreno.