Maidana is a threat to Ortiz’s plans for stardom 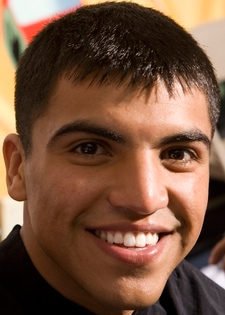 Victor Ortiz wants to be boxing’s next attraction.

The junior welterweight prospect is not alone in that desire.

Ortiz (24-1-1, 19 knockouts) has a dedicated group of knowledgeable, well-connected and influential individuals around him that share his vision of stardom.

Trainers Danny Garcia and Mario Aguiniga, former boxers from fighting families, believe Ortiz has the talent and the mentality to realize his dreams.

Co-managers Shelly Finkel and Rolando Arellano saw enough crossover appeal in Ortiz to buy out the contract of the fighter’s former manager, Cameron Dunkin, and then risk the wrath of Bob Arum by helping the 22-year-old southpaw move from Top Rank to Golden Boy Promotions early last year.

The Los Angeles-based promotional company has put Ortiz on a fast track to a world title, quickly advancing his opposition from journeymen like Dairo Esalas to fringe contenders like Mike Arnaoutis to the bona fide contender he will face Saturday night, Marcos Maidana.

HBO, which will televise the Ortiz-Maidana main event from STAPLES Center in Los Angeles, is also firmly behind Ortiz. The subscription cable giant has put considerable marketing muscle into a viral promotional campaign that pushes Ortiz on the network’s official Facebook page (http://www.facebook.com/hboboxing), which boasts a community of 10,000 boxing fans.

Visitors are encouraged to “GET TO KNOW VICTOR ORTIZ” by clicking on a banner with the fighter’s picture that sends a “friend request” to his personal Facebook page.

At HBO.com’s boxing page (http://www.hbo.com/boxing/) visitors are greeted by a large, top-of-the-fold black-and-white portrait of Ortiz next to a video player of a studio interview with him. Under the picture and player are the words: “VICTOR ORTIZ, ONE OF THE NEW FACES OF BOXING.”

There’s no picture of Maidana on the page, but the aggressive 25-year-old Argentine has the ability to throw a very large monkey wrench into the plans of Team Ortiz, Golden Boy Promotions, and HBO.

Maidana (25-1, 24 KOs) has impressive athletic ability and obvious punching power in both hands, but he proved in his last fight that he’s not your typical front-runner KO artist.

Make no mistake, Maidana is a real threat to Ortiz, who has been dropped by journeymen and has only fought past six rounds twice (never past 10 rounds) in his 5-year pro career.

“There’s always a concern when your fighter is in against a puncher,” said Arellano. “Anytime you see a record like Maidana’s a red flag goes up. We know he’s dangerous, but we looked at tape on him and saw that Victor has the technical capability to beat him.

“Maidana is strong and aggressive. He’s a bull. So Victor will be the matador.”

Arellano is half right. Maidana is strong and aggressive, but he’s not a one-dimensional slugger. He possesses a decent jab, he knows how to block punches and he has a reverse gear if he needs it.

Normally Maidana doesn’t have to concern himself with setting up his power or defense, but he will need these tools and tactics against Ortiz.

Helping to bring out the finer points of Maidana’s game is fellow Argentine Miguel Diaz, who put the fighter through a tough five-week camp in Las Vegas.

Diaz is a veteran cornerman best known for his work as a cutman, but the Las Vegas resident is also a knowledgeable trainer with decades of experience.

Diaz, the Boxing Writers Association of America’s ‘Trainer of the Year’ in 1999 for his work with Diego Corrales, Steve Johnston and Yory Boy Campas, said Maidana has had an excellent camp that has included 60 rounds of sparring with talented Filipino prospect Mark Melligen (15-1, 11 KOs) and former featherweight champ Kevin Kelley.

“We’ve been preparing for Victor’s style,” Diaz said. “This is my first time working with Marcos, so I didn’t want to teach him too much.

“He had been training for four weeks in Argentina, so he already had his conditioning when he arrived in Las Vegas. I’ve been working on straightening out his punches and adding to his movement, his feet and his upper body. It took a little bit of time for him to get used to my methods. He had never worked defensively with the mitts, but he learns quickly. He absorbs information like a sponge.”

Maidana is grateful for Diaz’s instruction.

“This fight is pretty even,” he said through Golden Boy Promotion’s publicist Ramiro Gonzalez. “We’re both strong and we can punch. Ortiz has a good jab and a good uppercut; he can fight on the inside. Diaz has been teaching me how to close the distance intelligently so I can get inside without getting hit.

“I prefer to fight in close, but I can fight from the outside, and Miguel has helped make me a better boxer from a distance.”

Ortiz has studied the tape of Maidana’s fight with Kotelnik and he says he’s expecting a better version of the Argentine on Saturday.

“I know there are a lot of expectations, but I don’t feel any pressure because I know what I’m facing and I’ve trained hard for it.

“Whether the fight goes long or short, it’s going to be a war, but I’m ready for it.”

Both Ortiz and Maidana shook out for the media and a small group of fans at an open workout held at the Westside Boxing Club in Los Angeles on Wednesday afternoon.

Maidana was up first. The Argentine’s power was evident as he thumped on a 100-pound heavy bag for three 5-minute rounds. His hand speed and balance looked pretty good, too, although he didn’t maneuver much around the elevated bag.

Maidana has a decent jab, but he doesn’t use it consistently. From what I’ve seen on YouTube.com, he’s got a hard right hand (that he over-commits), but the left hook was his main punch during this bag workout. Everything he did seemed geared to dropping the left hook.

Maidana looks to be in terrific shape. He didn’t appear very toned in some of the YouTube video I’ve seen, but he’s lean and muscular for Saturday’s fight. Both junior welterweights stand around 5-foot-9, but it was clear that Ortiz is the bigger man once the Oxnard, Calif. resident entered the gym and began his workout.

Ortiz’s shoulders and back are more broad than Maidana’s. His arms and legs seem thicker, too.

However, although he appears to be carrying more bulk, Ortiz is clearly the more mobile of the two fighters. He exhibited quick footwork while shadowboxing in the ring.

Despite the cameras and onlookers, Ortiz was completely in “the zone” as he threw punches at his imaginary foe. His steely concentration, which he also exhibited on the double-end bag, is definitely one of his main assets.

In comparing their bag work, Ortiz appeared more calculating of the two. He was always looking to set up his power punches: shooting a hard up-jab for his left cross, dropping a left hook after a one-two combination. Ortiz had more punch variety as well, mixing in uppercuts, body shots and crosses whenever he saw fit.

If Wednesday’s workouts were any indication of the style and strategy the fighters will exhibit on Saturday, fans can expect Maidana to flash some lateral movement in spots but mainly walk forward. If Diaz was able to impart any of his wisdom, Maidana will move his head and try to block shots on his way inside. Ortiz will look to establish his jab and catch Maidana with his straighter punches. With is footwork, Ortiz can probably give Maidana a lot of trouble by sticking and moving. However, if Ortiz hurts Maidana, fans can expect the southpaw to take the fight to the orthodox puncher. If that happens, the “war” that Ortiz predicted will probably happen.

A surprise guest to Wednesday’s workout was Golden Boy Promotions president Oscar De La Hoya, who dropped in to check out “the chosen one” of his company and offer some encouraging words.

De La Hoya entered the boxing club to chants of “Oscar! Oscar!” by the mostly pre-teenage members of the gym. When he made his way across the room to embrace Ortiz while the young fighter was getting his hands wrapped, Arellano remarked: “That’s the passing of the torch right there.”

Ortiz better be careful not to drop it Saturday night.