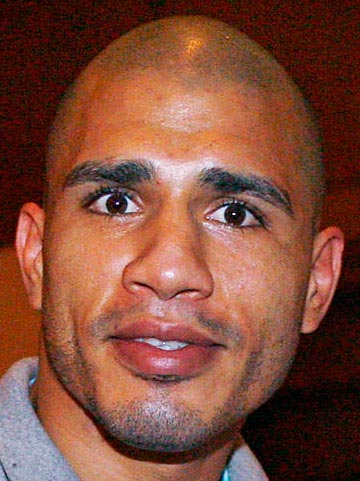 Miguel Cotto (left), here leaning back from a right cross from Joshua Clottey, had a tough time with the Ghanaian welterweight contender during their hotly contested battle Saturday night. Cotto struggled so much that he was dropped a few places in THE RING's Pound-for-Pound ratings. However, a potential November showdown with Manny Pacquiao is a perfect opportunity for Cotto to climb to the top of the list. Photo / Ed Mulholland-FightWireImages.com.

Saturday’s welterweight matchup between top contenders Miguel Cotto and Joshua Clottey was an intense clash of styles that entertained a packed Madison Square Garden arena and millions of fans watching the live HBO and international broadcasts.

However, the win was far from decisive, a fact that has led THE RING editorial board to lower Cotto’s placement in the magazine’s pound-for-pound ratings.

Most boxing writers have considered Cotto to be among the sport’s elite fighters ever since his close decision victory over Shane Mosley in November of 2007.

There was a brief period when he was off THE RING’s pound-for-pound list following his stoppage loss to Antonio Margarito last July. However, after a strong showing against Michael Jennings in February and the revelation that Margarito attempted to load his gloves before his fight with Shane Mosley casting a cloud of suspicion over the Mexican’s victory over Cotto, the Puerto Rican star was reinstated at No. 7 on THE RING’s pound-for-pound list.

However, it’s one thing to struggle with a future hall of famer like Mosley, or to be knocked out by a relentless iron-chinned mauler who may have had loaded gloves; but it’s quite another to go life and death with Clottey.

Clottey is by no means a pushover. The Bronx-based Ghanaian has earned his place among the top welterweight contenders. However, Clottey usually does just enough to win or lose his pivotal fights, which prevents him from being perceived as a “world-beater” by most fans and boxing writers.

He was thoroughly outworked by Margarito after he outclassed the Mexican over the first four rounds. He struggled in the late rounds against fringe contender Richar Gutierrez. Even his victory over former champ Zab Judah, which earned him a shot at Cotto, was a close, technical decision.

The bottom line is that Clottey is a solid-but-unspectacular fighter, the kind of opponent an elite fighter should decisively beat.

Thus, Cotto fell from No. 7 to No. 9 in THE RING pound-for-pound ratings. His demotion advanced Nonito Donaire and Vic Darchinyan one slot each to No. 7 and No. 8, respectively.

“While Cotto showed a lot of heart in overcoming a serious cut and a strong bid by Clottey, after a brief discussion THE RING editorial board unanimously agreed he did not look like the seventh best fighter in the world and that an adjustment was in order,” RING editor Nigel Collins said.

Cotto fans need not work themselves into an uproar if they happen to disagree with Collins and company.

Bob Arum, promoter of both Cotto and pound-for-pound king Manny Pacquiao, would like to match his two top fighters in November of this year.

Freddie Roach, Pacquiao’s trainer and friend, has stated on record that he is open to a Cotto fight as long as the welterweight titleholder is willing to come down a few pounds, perhaps to a 143- or 144-pound catch weight.

“Before he fought Clottey, we talked to Miguel about the possibility of fighting Pacquiao and he was open to fighting at a catchweight,” said Lee Samuels, Top Rank’s publicist.

“We still have to get an OK from Manny and Freddie, but that’s the fight Bob is hoping to get done. We’ve already reserved a date with the MGM Grand (resort and casino in Las Vegas) for November 14.”

Pacquiao, who was in New York City this past weekend to collect his 2008 Fighter of the Year award from the Boxing Writers Association of America, was ringside for Cotto-Clottey. The Filipino icon was impressed with Cotto’s performance, according to Samuels.

“Bob sat next to Manny during the fight and Manny told him ‘I know how difficult it is to fight with a bad cut like that. I fought with a cut like that in my first fight with Erik Morales and I know it’s very hard to compete like that,'” Samuels said.

Pacquiao has other options for his November opponent, such as current WBA welterweight titleholder Shane Mosley, but Samuels says Cotto is the frontrunner.

Samuels said Mosley, who has had a tough time finding a worthy opponent since destroying Margarito in January, might want to consider Clottey.

“Not long after Saturday’s fight, Clottey told us he would like to fight Andre Berto or Shane Mosley,” .Samuels said. “He’s even willing to fight Paul Williams at 147 pounds, so those are the fights we’ll try to make for him.”

Speaking of Clottey, did his terrific effort against Cotto advance his placement in THE RING’s welterweight rankings?

Check out THE RING’s Ratings update and find out:

Robert Guerrero (No. 9 last week) exits to campaign at lightweight, where he will have to earn a rating. Stopping Efren Hinojosa, who had only won once in his last five fight coming in, wasn’t enough to dislodge any of the current lightweight contenders.