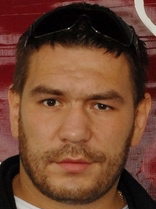 Ruslan Chagaev: The Ukbek heavyweight is scheduled to face Nikolai Valuev in a fight very few cared about. A hepatitis B antigen is then found in his system and he’s not allowed to fight. Then David Haye pulls out of his fight against Wladimir Klitschko on June 20 after injuring his back. Chagaev, fit and available, then becomes Klitschko’s opponent for undoubtedly more money and much more at stake. If Chagaev beats Valuev again, who cares? If Chagaev beats Klitschko – for THE RING championship – he’s suddenly on top of a weak heavyweight world with Vitali Klitschko.

David Haye: The June 20 fight was supposed to be the former cruiserweight champion’s entry into big-time heavyweight boxing, which traditionally is where the most fame and fortune can be found. Now this. Haye gave it try by asking Klitschko to wait three weeks but the big Ukrainian, who considered the request, made the right choice. To wait would’ve been too risky. Klitschko and his handlers say a fight against Haye could happen next year, assuming he beats Chagaev. One never knows, though. Haye might have to wait a long time to receive such an opportunity again.

<Wladimir Klitschko: Klitschko could’ve waited for three weeks and hoped that Haye would’ve recovered sufficiently from his back injury to fight on July 11. It would’ve been a hassle for the 60,000 fans expected to pack a soccer stadium in Gelsenkirchen, Germany, and the organizers but it was a reasonable option. Instead, he chose to fight as planned on June 20 against arguably a better fighter than Haye. Chagaev is a natural heavyweight who was preparing for a tall opponent and also happens to be a southpaw. The replacement fighter doesn’t often present a stiffer challenge than the original opponent.

HBO: The U.S. network that was scheduled to television Klitschko-Haye passed on Klitschko-Chagaev. Kery Davis, senior vice president of sports programming for HBO, suggested to RingTV.com contributor Brian Doogan “that Chagaev would not be recognized if he were to walk down the street.” The same can be said for almost all of Klitschko’s opponents, including Haye outside the UK and some who fought the big Ukrainian on HBO. Klitschko has become an attraction, even in the U.S. And Chagaev, while not well known, is a legitimate opponent. This fight should be on HBO.

Carlos Molina: Danny Perez didn’t seem like Danny Perez on Friday in Miami. The junior middleweight contender was supposed to fight Carlos Quintana but Quintana pulled out, leaving Perez to face a relative unknown on national television. Perhaps he couldn’t find the proper motivation. That said, Molina, taking the fight on six day’s notice, was fit and fiery. The Mexican native fought hard and effectively from beginning to end, never allowing Perez to build momentum. Molina, who gave Mike Alvarado and Julio Cesar Chavez Jr. tough fights, did his job against Perez and is now in the mix for bigger fights at 154.

George Foreman III The name George Foreman still commands attention. The former two-time heavyweight champion’s second-oldest son, George III, or “Monk,” as his family calls him, made his professional debut on Saturday amid a blanket of media coverage. Monk won his off-television debut fight by a first-round knockout but we really don’t know how good he’ll be. What we do know is that the world will pay close attention whenever he fights, at least for a while. And the public will like what it sees in the young man. Big George did a great job raising him.

George Foreman III’s: OK, Foreman has never been in an organized fight of any kind. Of course, you want him to get his feet wet against someone who will put up only token resistance. But, c’mon. Clyde Weaver, Foreman’s debut opponent, wasn’t even a fighter. First of all, he looks as if he’s never trained a day in his life. And he was more concerned with covering his head than fighting back. He might not have thrown an actual punch and almost certainly didn’t land one in the abbreviated fight. Again, Foreman didn’t need a test in his first fight. However, he barely had a live body in front of him.

Shane Mosley: Let there be no doubt that Mosley wants to lure Manny Pacquiao into the ring. First, he says he’ll meet at a catch weight between 140 and 147 to make it happen. Then he says that money will be no issue. And then he reportedly says he’ll give Pacquiao an immediate rematch if the Filipino icon loses. That pretty much covers it all. The problem is that Pacquiao, the king of the boxing world, has a lot of options. Trainer, Freddie Roach, said his fighter prefers to face Floyd Mayweather Jr. (if he beats Juan Manuel Marquez) because he perceives that as a bigger fight.

Thursday: That’s when we stream live fights on our website for the first time. “Fight Night Club,” promoted by Golden Boy Promotions, will be a monthly series featuring young prospects at Club Nokia in downtown Los Angeles. On Thursday, the series debuts with junior lightweight David Rodela of Oxnard, Calif., facing L.A.’s Juan Garcia in the six-round main event. Also, Luis Ramos, a lightweight prospect from Santa Ana, Calif., takes on Baudel Cardenas of Mexico in a four-rounder. The card will also be televised live on Versus. Stay tuned for more details about our big night.

Freddie Roach: “We crushed Oscar, and we can crush Mosley too because they had two close fights.”