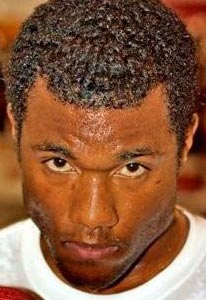 The younger Foreman, 6 feet, 5 inches and 240 pounds, knocked out a novice from Arkansas named Clyde Weaver 1:16 into the first round of a scheduled four-round heavyweight bout Saturday night at Coushatta Casino Resort in Kinder, La.

The 26-year-old, who had never taken part in an organized boxing match, knocked Weaver (0-2) down with a left hook to the body and that was that; the fight was stopped.

George Foreman the original, the two-time heavyweight champion, has trained his son the past year but didn’t work his corner. Afterward, he said the younger Foreman was as calm and collected as a seasoned pro.

“You’d never believe he never had an amateur fight. He looked so good,” Big George said.

The younger Foreman, who has a business degree from Rice University, had been running his father’s business interests the past few years. He put that aside to give boxing a try.

He plans to fight regularly to learn the ropes and not rush into high-profile, big-money fights.