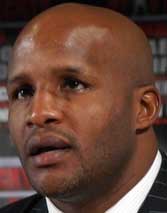 LAS VEGAS — Michael Moorer is satisfied with his boxing career. He’s a former light heavyweight and heavyweight title holder, his most-impressive accomplishment being a victory over Evander Holyfield in 1994. And more important to him, “I came out unscathed.”

He did have to contend with one issue after his final fight in February of last year, though: What to do with the rest of his life.

Moorer apparently doesn’t make plans. He says he “let’s things happen by themselves.” All he knew for sure during the past year was he wanted to be around boxing. He had started working with fighters in Florida but craved more.

He was molded by Emanuel Steward at the now-defunct Kronk Gym in Detroit, a bustling boxing factory where world champions sparred with one another in wars that were often better than title fights. That’s what Moorer wanted. And he knew where to find it.

He called an old friend: His one-time trainer, Freddie Roach, who had extended an invitation to come out West and work at the buzzing Wild Card Gym in Hollywood, Calif. One day in January, Moorer finally showed up.

Now, the former champion is deep into a second career as chief assistant to one of the world’s top trainers and an important second set of eyes for Manny Pacquiao, who faces Ricky Hatton on Saturday at the MGM Grand on pay-per-view.

“Michael had been telling me for about a year he was going to help me and he finally showed up,” Roach said. “He doesn’t like the West Coast much. Still, he took it on. We had a great relationship when we worked together. …

“I thought it was my obligation to help him, to give him a chance to do something he loves to do.”

Moorer was known as a surly, temperamental fighter. Sometimes he was reasonable, often he wasn’t. Thus, he was difficult to train much of the time. Roach confirmed that. And the fact he went through seven trainers is further proof.

However, beneath any angst, it was obvious that he was bright. A two-minute conversation with him when he was in a good mood was more than enough time to know that he was smarter than the average pug.

Just as obvious, he was a good, well-schooled boxer. That shouldn’t be a surprise in light of his mentors. Anyone who has worked with the likes of Steward, Teddy Atlas and Freddie Roach is likely to absorb a lot of valuable insight.

“I always thought I could be a good trainer,” Moorer said, “because I had the best teachers. I think I was destined to do this.”

He always thought that Moorer was intelligent and well-versed in his craft, although he still was pleasantly surprised when the champ began to play the role of teacher at The Wild Card.

“I was very surprised about his boxing knowledge,” Roach said. “I didn’t really see that when I trained him (in 1997). He’s much smarter than I thought about the science of boxing, all the little things. When he was a fighter, that never came across to me that well, although obviously he had to be smart to win those titles.”

Moorer came to The Wild Card at a particularly exciting time, with Pacquiao reigning as the best fighter in the world pound for pound.

The big man still puts some people off, particularly with his directness. Not Pacquio, though. At first, there was a feeling out period – like two fighters after the opening bell – but soon they were fast friends.

Pacquiao is a man of few words but loves a good prank, even on a former heavyweight champion who is twice his size. Roach witnessed Pacquiao taking Moorer’s legs out from under him once just for laughs, proof that they’ve bonded.

And Moorer has played a significant role in Pacquiao’s preparation for the fight Saturday. He has difficulty working the mitts with the quick, 140-pounder because he’s too slow but offers valuable observations and suggestions.

That would include something Roach can’t provide: A southpaw’s perspective. Moorer fought left-handed and so does Pacquiao.

Roach and Pacquiao consider him an important part of the team.

“The more time they spend together, the better,” Roach said. “Some of things Michael suggests we agree with, some we don’t. We always talk it out thought. Overall it’s a good situation. ÔÇª I still do the physical work. He’s not as good on the mitts as me because he’s a bigger, slower guy. He can’t catch Manny’s punches.

“Where he really helps is as a third eye.”

“It’s very important to hear a different voice,” he said. “Sometimes Freddie can’t see all the techniques we have to do in the ring when we’re training. It’s good to have Michael Moorer on my team.”

As Roach said, the fighter-turned-trainer isn’t crazy about the West Coast. It really doesn’t matter, though: He spends 14 hours a day at the gym, learning from Roach, lightening the head trainer’s load and making his own contributions.

“I love the game of boxing,” he said. “I missed it. I guess Freddie had a lot of trust in me to make me his assistant and also to work with Manny Pacquiao. It means a lot to me, to have people listen to me and do the things I suggest.

“I’m very fortunate, very blessed to be in the position I’m in.”