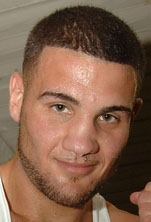 Malcolm Klassen knocked out Cassius Baloyi in the seventh round to take Baloyi’s IBF junior lightweight belt Saturday in Mafikeng, South Africa, the homeland of both fighters.

Also Saturday, in Monreal, Peter Manfredo, the former star on “The Contender,” bounced back from his knockout loss to Sakio Bika in November by stopping Walid Smichet in seven rounds in a scheduled 10-round bout.