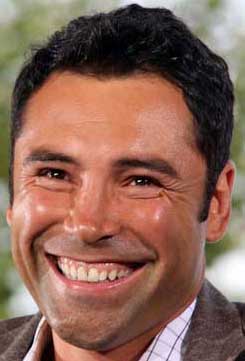 Oscar De La Hoya's knockout loss to Manny Pacquiao in December was the most disappointing of his career and played a key role in his decision to retire. Photo / Chris Cozzone-FightWireImages.com

The bar was set incredibly high for Oscar De La Hoya right from the beginning. He was the gold medal winner, “The Golden Boy,” the next Sugar Ray Leonard. He was expected to become the greatest fighter on the planet, a difficult proposition to say the least.

De La Hoya didn’t’ have the athletic ability of a Floyd Mayweather Jr. but was a skillful boxer with quick hands and a lethal left hook. He lost most of his biggest fights but won some, too. He never became the greatest fighter but did top the pound-for-pound rankings for a time.

In the end, he probably won’t be labeled “great” but he’s probably only one notch down from that. Certainly, he’ll be inducted into the International Boxing Hall of Famer when his time comes.

“Because he was an Olympic gold medalist, because he was a good-looking young man and because it was clear early on that he would ultimately make his biggest statement as a welterweight, he was compared to Sugar Ray Leonard,” said television analyst Larry Merchant, who worked most of De La Hoya’s big fights.

“And that’s a very hard comparison to live up to. He fell short of that, Leonard being one of the best fighters of modern times.”

De La Hoya looked like a great fighter early in his career, at 135 pounds and below, when his physical advantages – size, speed, that left hook — were pronounced against good, but not elite opponents. He went 20-0, with 18 knockouts, against a group that included John John Molina, Rafael Ruelas and Genaro Hernandez, who fought De La Hoya with a damaged nose.

That kind of success, combined with his charisma, thrilled fans the first few years of his career much as any great knockout artists does. He seemed to be all but unbeatable.

However, as he grew heavier and began to fight better opponents, his power diminished and so did his success rate. He went 19-6, with 12 knockouts – to finish 39-6, 30 KOs — the remainder of his career. That wasn’t what he or anyone else expected after the amazing earlier run.

Sure, he had his share of important triumphs. His first victory over Julio Cesar Chavez was a huge event in 1996; he found a way to outpoint an aging, but still-proficient Pernell Whitaker in 1997; he removed any doubt about his toughness when he rallied to outpoint then-unbeaten Ike Quartey in 1999; and his KO of rival Fernando Vargas in 2002 was his most-satisfying victory.

However, such successes were outweighed by disappointment. The losses in his biggest fights were painful, not only because he failed but also because things might’ve turned out differently in few cases.

The most painful loss was his first, to then-unbeaten Felix Trinidad in a mega-fight that gripped the boxing world in 1999. For eight-plus rounds, De La Hoya boxed the Puerto Rican idol silly — much as Bernard Hopkins and Winky Wright would do later – and seemed to be cruising to an easy victory.

Then, apparently convinced his lead was insurmountable, he decided to avoid danger by running. That opened the door for Trinidad to climb back into the fight and ultimately pull out a controversial (read: bad) majority decision.

A tremendous opportunity was wasted.

“Oscar gave it away,” said Eric Gomez, a lifelong friend and matchmaker at Golden Boy Promotions. “He probably should’ve done more to close the show. I guess the corner said, ‘Be careful, don’t take risks.’ I know Oscar regrets it. You just can’t get it back, though.”

The next loss was to L.A.-area rival and then-unbeaten Shane Mosley in 2000 in Los Angeles, a split decision. No shame there; Mosley also is a future Hall of Famer and was in his prime.

Then came a second meeting with Mosley in 2003 in Las Vegas. This time, Mosley won a unanimous, but very close decision that De La Hoya and those close to him still insist he won. Plus, Mosley later admitted that he’d taken steroids before the fight, which some believe should render the result void.

The following year, he made the dumbest choice of an opponent in his career: Bernard Hopkins, a true middleweight who was too big – and too good, as it turned out – for him. Hopkins was in the process of breaking down the smaller man when he landed a body blow that sent De La Hoya to canvas and he was counted out.

The way it ended didn’t sit well with some observers, who thought he stayed down not because he couldn’t get up but because he wanted a way out of the fight.

De La Hoya’s performance against Floyd Mayweather Jr., considered the best fighter in the world, in 2007 in Las Vegas is probably underappreciated. He gave the quicker, immensely talented Mayweather all he could handle for 12 rounds before ending up on the wrong side of a split decision.

Another big fight, another loss.

And, finally, we arrive at his fight against Manny Pacquiao in December. De La Hoya had never taken anything resembling a beating his entire career; in this fight, though, he did. Pacquiao was took quick, too good for the aging star, who quit on his stool after the eighth round.

Afterward, many speculated that De La Hoya had sabotaged any chance he had to win by losing too much weight too soon. However, again, it didn’t matter: He failed to perform on the biggest stage and came up short.

Once again, he came up short. How can he be considered great with so many disappointments?

Well, Gomez came up with an argument. He compared his friend to Hearns, a thrilling slugger who lost his two biggest fights – to Leonard (who rallied to score a 14th-round TKO) and Marvin Hagler (who scored an epic third-round KO).
Like De La Hoya, the “Hitman” had some big victories – Pipino Cuevas, Roberto Duran, Wilfred Benitez and Virgil Hill among them – but carries the stigma of his big losses.

“In my opinion Oscar belongs with a fighter like Tommy Hearns,” Gomez said. “Hearns lost to Leonard, he lost to Hagler, he lost to other fighters, and he’s still considered great. I think Oscar should be thought of in the same way.

“I think a lot of people see him as a pretty boy or something like that. When all is said and done, I think people will look back and say, ‘You know what, he really was a great fighter.'”

Merchant is in a group that won’t buy that argument but he doesn’t think Chavez is far off the mark.

The broadcaster pointed out that De La Hoya was blown out in one fight his entire career, against Pacquiao. He lost to Hopkins in a decisive manner but was hardly beaten up. And each of his other four losses – Mosley twice, Trinidad and Mayweather – were so close they could’ve gone the other way.

That’s not a bad resume.

“Once he started fighting the best fighters,” Merchant said, “he was in a lot of tough, close fights. He always performed. He was really a fighter. No matter how rich he got, no matter how good looking he might’ve been, he was a fighter. And a damned good one.”