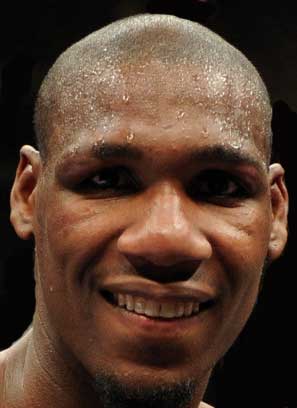 Paul Williams had reason to be happy after dominating one of the best fighters in the world on Saturday in Las Vegas. Photo / Ray Kasprowicz-FightWireImages.com

Paul Williams: It’s difficult to gauge the public perception of Williams. Only 5,000-plus showed up at Mandalay Bay Resort & Casino to watch him fight an established fighter in Winky Wright on Easter weekend. And fans might not know what to make of his style, which is unusual to say the least. That said, anyone who has some knowledge of boxing and saw the fight must recognize that he turned in a tour-de-force performance against one of the best fighters in the world. It will be interesting to see whether his name-recognition spikes after that performance.

Winky Wright: OK, the likely future Hall of Famer was away from boxing for 21 months. Is that a comeback? And, yes, he was virtually shut out on the scorecards against Williams. Still, at 37 and 18-plus years into his pro career, he has retained most of his impressive athletic and boxing ability. He just ran into a young, in-his-prime monster in Williams. Wright got in his licks and proved to be resilient but simply couldn’t cope with the winner’s physical attributes and overwhelming punch volumn. Wright vowed to fight on; he showed on Saturday that he could still be very successful.

Williams vs. Wright: Most of those who saw the fight might disagree here but the scoring of Saturday’s fight – 120-108, 119-110 and 119-110 – was too onesided. Make no mistake: Williams dominated the fight. However, this was no shutout. In the third through seventh rounds, Williams’ punch output dipped somewhat and many of his shots landed on Wright’s gloves. Also, Wright landed some of the cleanest punches of the fight during that period. All that said, though, it really doesn’t matter. I scored it 117-111, which is also a wipeout.

Chris Arreola: The exciting heavyweight contender could get a shot at Vitali Klitschko this summer in Los Angeles. In one sense, that’s exciting for him. It would be the highest-profile fight of his career and earn him his biggest payday. However, it also would end the momentum he has built in recent fights because he has little chance of beating the elder Klitschko. Arreola’s defensive skills are just too weak. Now, he’s an unbeaten, intriguing heavyweight on the rise. After he loses to Klitschko, he would be just another decent heavyweight trying to make a living.

Arreola vs. McCline: Arreola weighed 255 pounds, equaling the third heaviest in his career. McCline weighed 271, his heaviest ever against a big-name opponent. Arreola wasn’t a pretty site, as usual, but he appeared to have trained properly based on his work rate. That didn’t appear to be the case with McCline, whose mouth was wide open by third round. That means he was exhausted. Arreola hurt McCline in the fourth and final round but I think he was more tired than hurt and decided it was best to stay down. It was the first time McCline ended a fight on the canvas.

Oscar De La Hoya: The biggest money-maker in boxing has been the unchallenged center of attention almost all of the past 15 years. On Saturday, he gave way to the featured fighters and stayed in the background until he briefly introduced Wright at the post-fight news conference. Oscar De La Hoya in the background? That’s hard to grasp. On Tuesday, he will announce his decision on whether he will fight again. We all assume that he’s finished, which means those in the boxing business will have to get used to his new role as strictly a promoter.

Jeff Lacy: Before he fought Joe Calzaghe three years ago, the big puncher from St. Petersburg, Fla., was perceived by many as a candidate to break into the Top 10 pound-for-pound list. On Friday, he barely outpointed a journeyman named Otis Griffin. In other words, he’s barely hanging on as a viable big-name boxer. Afterward, he called out fellow Floridian Roy Jones Jr., which actually makes sense. Lacy, who obviously was never as good as billed, against a shell of a one-time great fighter probably would attract enough attention to make a few dollars and Lacy would have a chance to win.

Berto vs. Urango: Andre Berto and Juan Urango aren’t candidates to crack the Top 10 pound-for-pound list any time soon but both are fun to watch, which makes their May 30 matchup in Hollywood, Fla., intriguing. Berto is coming off an extremely entertaining brawl against Luis Collazo in January, in which he showed tremendous determination and resilience. Urango is a forward-moving, offense-minded fighter who has lost only to Ricky Hatton. This is a can’t-miss entertaining matchup. Berto is the WBC welterweight titleholder.

Winky Wright: “I knew he threw a lot of punches. I didn’t know he threw THAT many punches,” on Williams’ punch output – 1,086 total punches over 12 rounds.