Hernandez gave us a precious gift 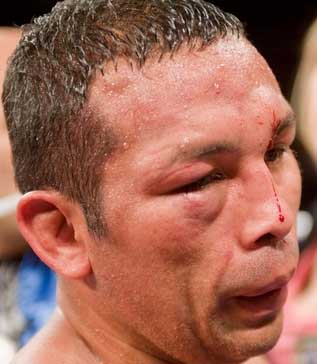 Carlos Hernandez knew immediately after his fight against Vicente Escobedo that he did something special. Photo / Chris Cozzone-FightWireImages.com

Some knowledgeable people in boxing circles were worried about Carlos Hernandez going into his fight against Vicente Escobedo as part of the “Lightweight Lightning” card Saturday in Austin, Texas.

The former junior lightweight titleholder is 38 and has a style – aggressive, willing to take punishment – that results in debilitating wear and tear on the body. And he looked shot in his previous fight, a split-decision victory over journeyman Hector Alatorre last August.

That was his first fight after a two-year layoff and, many believed, should’ve been his last.

“I just hope he doesn’t get hurt,” one observer said of the well-liked fighter out of Los Angeles.

Certainly, no one – with the possible exception of Hernandez himself – expected to see what occurred in the ring that night.

Hernandez went down late in the first round. One could almost hear those familiar with his career thinking, “Uh oh. Here it comes.” He went down again in the second round. “Oh man, let’s hope it ends quickly so he can walk out of the ring under his own power.”

And then, in the very next round, something came into focus: Hernandez wasn’t going anywhere. Round after brutal round, as the old man and the strong, young prospect exchanged punishing blows at a furious rate, it became increasingly clear that something special was happening.

By mid-fight, Hernandez’s face was a mess. Blood from a cut above his left eye obscured his vision and it wasn’t long before both eyes were swollen almost shut. Still, he fought on, turning what seemed destined to be a slaughter into a war.

The look on Escobedo’s face was, “I never bargained for this.”

In the later rounds, clearly Hernandez grew tired. The old legs seemed to be giving out and it became harder and harder to throw punches in what undoubtedly was a private hell. However, one could feel his determination, as if he were willing his body to do something it wasn’t capable of doing.

He was somehow extracting from himself one last world-class performance, one last demonstration of the type of fighter he wants people to know he has always been.

The fans knew what they were seeing and roared their approval with more and more conviction as the fight progressed. And Hernandez said afterward that he fed off their heart-felt expression of approval, as if they fueled his mission.

As the bell to start the 10th and final round sounded, he walked across the ring and embraced Escobedo to thank him for his role in this high drama. Then, before the violence resumed, he let out a loud, “Wooo, hooooo!” his way of saying nothing in life could top that moment.

The fans roared throughout the 12th round as Hernandez battled both Escobedo and his failing body but — incapable of quitting — he turned his will into energy and trudged on. As the final seconds ticked away and it was clear that Hernandez would finish on his feet, most everyone – including normally cynical journalists – gave him a spine-tingling ovation. Many had tears in their eyes.

Hernandez lost the fight by a unanimous decision but it hardly mattered. This wasn’t about winning or losing; it was about the human spirit.

I thought of the exhausted Swiss runner Gabriele Anderson-Scheiss, who staggered into the Los Angeles Coliseum in the 1984 Olympics at the end of the inaugural women’s marathon and crawled across the finish line because she refused to quit. Few remember the winner.

To me, Hernandez defined what it is to be a fighter that night. It’s not about titles and fame and money. It’s about courage and determination, fearlessness and sacrifice. That’s a fighter; that’s what I love about boxing.

After he walked out of the ring, Hernandez made his way over to the boxing writers nearby. It was an emotional moment as he fought back tears but he was able to make a poignant statement:

“It could be my last fight. If it is, everyone will know that I went out with my head held high. I’m proud of my career. I was a guy who didn’t have the most skill but I had a lot of heart.”

He was asked by one choked-up reporter whether he understood what his performance meant to those in the arena. He couldn’t get any words out because he was overcome by emotion but nodded emphatically. He knew he’d made a profound connection with everyone there.

Then, pulling himself together, he thanked the writers for caring.

He thanked us? No, Carlos. Thank YOU. It was an honor to witness what you did.