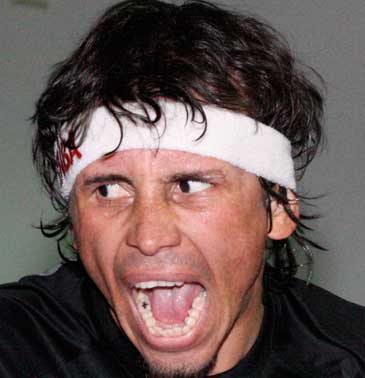 When it was first announced, Golden Boy Promotion’s “Lightweight Lightning” card looked like the best independent pay-per-view show of the year.

The four-bout card from the Frank Erwin Center in Austin, Texas put together eight of the most-experienced and accomplished lightweights and junior lightweight who are now campaigning in the 135-pound division.

However, the withdraw of former lightweight champ Joel Casamayor and former 130-pound titleholder Jorge Barrios because of training injuries removed some of the card’s luster and a lot of experience from the roster of combatants.

That said, with late replacements Vicente Escobedo and Rolando Reyes, the matchups are no less competitive, but the complexion of the card has changed.

It’s now four fights that either pit a young fighter against an older veteran or up-and-comer against a seasoned former titleholder.

Reyes, Escobedo, Katsidis and Valero are all looking to improve their name recognition by beating their more-experienced opponents.

Reyes (30-4-2, 19 knockouts) takes on Diaz, a former two-time lightweight titleholder, in the opening bout of the card.

At 30, Reyes is a year older than Diaz, but the Oxnard, Calif., native is a mere pup in terms of his accomplishments and TV exposure when compared to his opponent from Coachella, Calif.

Diaz (36-4, 26 KOs) is only 29 but it seems as if he’s been around forever. To younger fight fans, he has been around forever since he’s been on the radar since he turned pro in 2001, ballyhooed as one of the hottest prospects in the sport. Fans literally watched him grow up fighting on ESPN, Telefutura, Showtime and HBO. They’ve seen him suffer setbacks, such as his controversial decision loss to Angel Manfredy and his shocking first-round KO loss to Juan Valenzuela, and they’ve watched him rise to the occasion to twice win world titles.

Reyes has never had a title shot. The last time he got close, he allowed himself to be outworked by tough journeyman Miguel Huerta. The last time he stepped in as a late replacement he filled in for the late Diego Corrales, who had pulled out of his first scheduled rubbermatch with Jose Luis Castillo with a rib injury. Reyes went 12 rounds with the formidable Mexican veteran but never tried to mount any significant offense and lost in dreadfully boring fashion.

Reyes has won four fights since the loss to Castillo, including a 10th-round stoppage of a shopworn version of former champ Steve Johnston, but there are still questions about his desire. In terms of skill, talent and even style, he matches up well with Diaz.

But the fire that Diaz has shown in past fights, even his losses, which include a 10th-round stoppage to Castillo, might be the difference in a closely contested boxing match.

In the second bout of the card, Escobedo (19-1, 12 KOs) looks to regain the promise he once had by taking on Hernandez, a former 130-pound titleholder.

Escobedo, a 2004 U.S. Olympian, drew comparisons to a young Oscar De La Hoya early in his career. But after winning his first nine bouts by knockout, the Woodland, Calif., native was taken the eight-round distance and out-pointed by Daniel Jimenez in a spirited battle. Escobedo won his next nine bouts, but didn’t exhibit the fire or form he showed before the loss to Jimenez. However, in his last bout, Escobedo put it all together in a sixth-round stoppage of previously undefeated Dominic Salcido.

Golden Boy Promotions is hoping to quickly move Escobedo, now 27, into contender status where they hope to position him for a world title shot. On paper, Hernandez (43-7-1, 24 KOs) looks like the perfect foil for this goal. The Salvadoran-American is 11 years older with the wear and tear of a 17-year pro career on his body. Hernandez is a pressure fighter who has slowed down considerably in recent years, which should play right into Escobedo’s stick-and-move style.

However, the L.A. native is by far the most experienced opponent Escobedo has ever fought. The best fighters Escobedo has faced thus far, Jimenez and Salcido, were prospects (and he struggled with both). Hernandez has lost a lot of his speed and some of his reflexes but his fighting heart is intact. Seven rounds of his last fight, a 10-round split decision victory against Hector Alatorre, was fought with one eye completely closed.

Escobedo should be able to box and counter punch effectively from a distance, but if he suffers any lapses of focus or fails to bring enough intensity, he might be out-hustled by the gutsy veteran.

Focus and intensity are never in question for Katsidis and Chavez. Both are known for giving their all every time they step inside the ropes. Despite losing both of his HBO-televised fights last year, Katsidis remains a top contender and player in the lightweight division for two reasons: His only losses are to Casamayor and Juan Diaz, and his face-first brawling style excites fans.

Chavez is a volume-punching pressure fighter by nature but he has underrated boxing ability and ring savvy that helped him win world titles at 130 and 135 pounds. Katsidis (24-2, 20 KOs) is still looking for his first world title, and he knows a victory over Chavez (44-4, 30 KOs) will help position him toward that goal.

The 28-year-old Australian has a lot going for him in the matchup. He’s eight years younger, three inches taller and he enjoys considerable advantages in speed, power and physical strength. However, Chavez, who provided stern challenges to a prime Floyd Mayweather Jr. and Erik Morales (who he fought with a severely injured arm and knee), is by far the more seasoned and skilled of the two warriors.

As fun as Katsidis is to watch, he has yet to defeat a world-class fighter. However, Chavez, who lives in Austin, might no longer be world class. No one but Chavez knows how healthy he really is after numerous major surgeries on his arm, shoulder and knee. And only he knows whether his heart is still in boxing after his tragic bout against Leavander Johnson, who died of head injuries after being stopped in the 11th round by Chavez in 2005.

He seems mentally and emotionally together at press conferences and in one of his comeback fights last year, he got the job done against the same Daniel Jimenez who beat Escobedo, winning a 10-round decision. If Chavez’s head and heart are in the right place, he and Katsidis should make for a very entertaining fight.

However, none of the first three fights can match the explosive potential of the Valero-Pitalua main event. It’s a showdown of two prolific punchers.

Pitalua (46-3, 40 KOs) is on a 14-bout knockout streak, including a sixth-round stoppage of lightweight contender Jose Armando Santa Cruz in his last bout.

The fight harkens back to classic all-puncher matchups like Carlos Zarate vs. Alfonzo Zamora or Zarate vs. Wilfredo Gomez. Those fights ended in the fourth and fifth rounds, respectively. Valero-Pitalua could be a more extended battle.

Pitalua has only been stopped once, way back in 1995. Valero has been on the deck once, against Vicente Mosquera in 2006, but he got up to stop the talented Panamanian 130-pound titleholder in the 10th round of a vicious slugfest.

Saturday’s fight might very well last into the 10th round given the rugged, macho nature of both combatants. Some fans and boxing writers believe the more rounds the fight goes the more it favors Pitalua, despite the Mexico-based Colombian’s advanced age of 39.

Some believe that Valero is a classic front-runner who relies solely on his power. He has been criticized for his often shoddy technique in recent fights and for having a lack of quality opponents on his ledger.

However, those who have seen the Venezuelan southpaw in the gym know that he has considerable boxing ability that the 27-year-old KO artist admits is underused in his fights.

And knowledgeable fans and boxing writers know that Mosquera, who was rated No. 4 among junior lightweights by THE RING when Valero fought him, was a quality opponent. The fact that Valero, who had never fought past two rounds, battled his way to the 10th round should dismiss notions about his ability to go tough rounds.

“There’s a lot of skeptics when it comes to Valero,” Rafael Hernandez, the host of a long-running sports show on Univision radio, said after sitting in on one of Valero’s workouts two weeks ago. “That’s because people haven’t seen him fight live. I get calls from fans on my show all the time asking if his power is real, if he is real. I called one of his fights in Mexico (agasint Zaid Zavaleta) and up close you realize not only how hard he hits, but how fast he is. He’s unbelievable. He reminds me of Manny Pacquiao.

“I think fans are going to be pleasantly surprised by him. It’s good that he’s fighting in the U.S. and against a battle-tested opponent that Mexican fans know well.”

Whoever wins Saturday’s main event will be known worldwide.