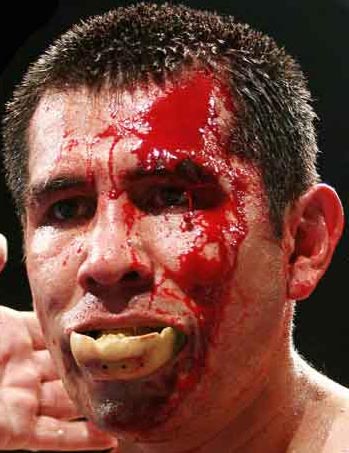 Promoter Don King has filed a protest on behalf of Marco Antonio Barrera claiming his fight against Amir Khan on March 14 in Manchester, England should've been stopped immediately after Barrera was cut and declared a no-contest.

The protest, filed with the British Boxing Board of Control, WBO and WBA, demands an immediate rematch.

Barrera and Khan clashed heads accidentally in the first round, causing a horrible gash on the left side of the Mexican fighter's head that bled uncontrollably from then on.

However, inexplicably, the ring doctor allowed the fight to continue until the end of the fifth round — one round longer than required for Khan to be declared the winner on points. The result would've been no-contest — requiring an immediate rematch — had it been stopped before the end of the fourth round.

“The doctor looked at it between the first and second rounds and didn't flinch, like he was saying, 'That's cool,'” said Tony Rivera, a cut man with 25 years experience who worked on the cut that night. “He was waiting for the fight to get through the fourth round and give Khan the decision.

“If they stopped it in the second round, it would've been no-contest. They wanted Marco's ranking.”

Immediately after the fight, Barrera seemed to be baffled by the actions of the British officials. He said the cut was no different after the fifth round than it was between the first and the second, suggesting it should've been stopped earlier.

“If I'd have had both my eyes the fight wouldn't have ended this way,” Barrera said, according to a statement released by King. “I couldn't see the guy from the first round, the blood was in my eye and I just couldn't see with it.”

However, one thing seems to contradict the notion that the actions of the British officials were calculated to give their fighter the victory. Why would referee Dave Parris stop the fight midway through the fourth round and have the doctor look at the cut instead of waiting for the round to end?

Had the doctor decided at that point to stop it, it would've been a no-contest.

Plus, according to Rivera, the ring doctor looked at the cut between the first and second rounds while King claims that the doctor examined it for the first time in the fourth round, which raises more questions.

Only one thing was indisputable: The cut, around three inches long and down to the bone, was horrendous.

“Marco brought a plastic surgeon friend of his to see the fight and they ended up up operating on him for 45 minutes in his hotel room,” Rivera said. “He didn't want to go to hospital. He said he had a doctor and plastic surgeon with him. He ended getting 30 stitches.

“What happened was an artery busted. There's no way a cut man can stop an artery from bleeding. It was really, really bad. I felt bad about it but the plastic surgeon [Victor Callejo] said, 'Tony, there's nothing you could have done with that, nothing.'”

“It was like someone hit Marco with a hatchet; it was like three inches. When I put a pad on it, it was fine; I was able to clean his forehead. As soon as I removed the pad, though, blip, blip, blood burped out of the artery. They should've stopped that fight immediately.”

Rivera said he considered stopping the fight himself but didn't feel he had the authority because Barrera's would've lost the fight had he done that. Only the ring doctor was authorized to stop it, Rivera was told in the pre-fight rules meeting.

King said there is only one way to rectify the problem.

“This dangerous officiating, if not corrected, leaves a black eye on the sport,” he said in the statement. “This is why I am appealing to Paco Valcarcel at the WBO, Gilberto Mendoza Jr. at the WBA and everyone at the British Boxing Board of Control to correct this egregious error and order an immediate rematch.”