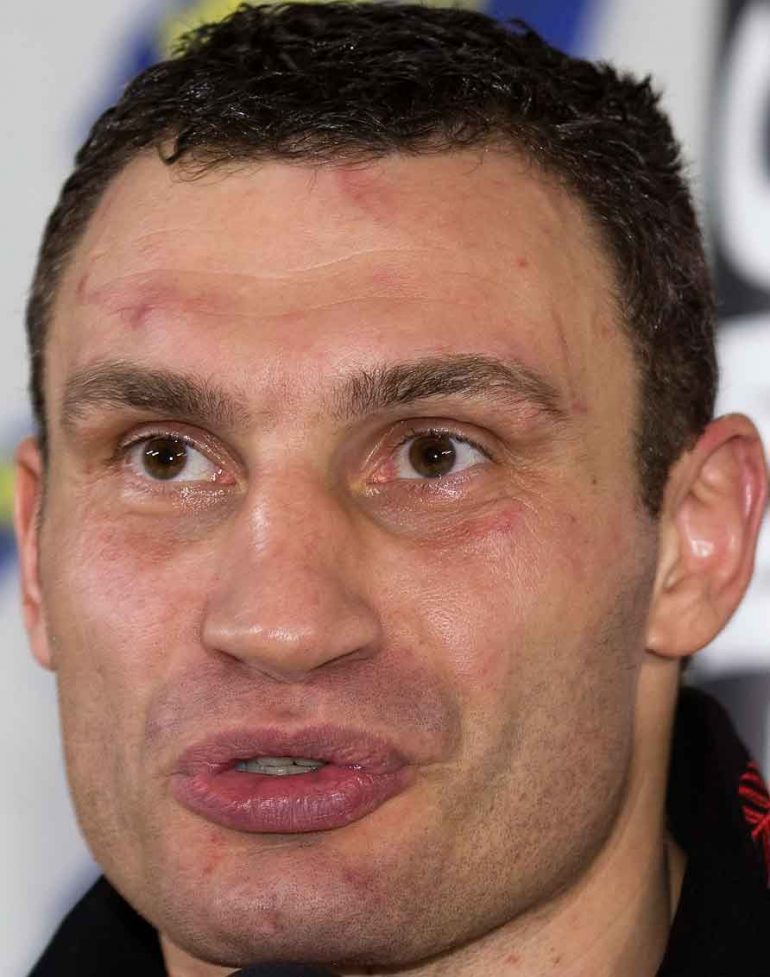 Vitali Klitschko: Juan Carlos Gomez entered the ring Saturday with decent credentials – only one loss, former cruiserweight titleholder, good boxing skills, courage. The Cuban defector left the ring a beaten man, both physically and mentally. THE RING’s No. 2 heavyweight dismantled his second consecutive capable opponent, the previous one being Samuel Peter in October. He isn’t pleasing to watch but is machine-like in the manner with which he breaks down his poor opponents. Only one has gone the distance with him.

Timo Hoffmann: The 6-7¾ German is the only fighter to have gone the distance with Vitali Klitschko, who is the same height. Hoffman fought Klitschko for the vacant European heavyweight title in 2000 in Hannover, Germany. Klitschko, fighting for the first time since tearing his rotator cuff against Chris Byrd seven months earler, won every round on two of the three cards and all but one on the third. However, Hoffmann survived 12 rounds. He has six losses but was stopped for the first and only time by Alexander Dimitrenko, a 12th-round TKO in 2007.

Chris Byrd: Don’t read too much into Chris Byrd’s victory over Matthias Sandow on the Klitschko-Gomez undercard Saturday. The former heavyweight titleholder apparently showed life and looked solid in his cruiserweight debut, scoring a fourth-round knockout, but Sandow (4-3) is a nobody with no experience. We need to see Byrd fight someone who can fight back after his disastrous attempt to drop from heavyweight to light heavyweight last May ended in defeat against another unknown, Shaun George. So far, so good, though.

Roy Jones Jr. It’s like watching Willie Mays hit 18 homers and bat .271 in his last good season. He was still pretty good, just not Willie Mays. Yes, Jones beat a rusty, mediocre-at-his-best Omar Sheika on Saturday and could still beat most top light heavyweights. And it’s not difficult to understand why he sticks around at 40: He’s trying to build his promotional company and probably does still enjoy fighting. However, it’s sad to see a one-time marvel perform as a mere mortal, as just another good fighter. And, more important, he’s taken enough punches. He once feared ending up like Gerald McClellan. He was right to feel that way.

Floyd Mayweather Jr. Junior reportedly will make an announcement soon that he is returning from his vacation. He’ll reportedly take a tune-up fight (which is a wise move) and then face one of the bigger names in or around the welterweight division. Mayweather vs. any one of them would be a big fight. However, here’s the order of biggest to smallest: Manny Pacquiao, Shane Mosley, Juan Manuel Marquez, Miguel Cotto and Ricky Hatton. The only one that would be a letdown would be a rematch with Hatton, even if the Briton beats Pacquaio on May 2. Been there, done that.

Bernard Dunne: The Dublin-area lad went into his first major title fight against WBA junior featherweight titleholder Ricardo Cordoba as a decided underdog but was a hero when it was over. He survived two knockdowns, dropped Cordoba four times and scored an 11th-round knockout to win the belt in front of 14,000 wildly screaming hometown fans packed into the O2 Arena. No one could’ve scripted a more-exciting scenario for Dunne or the Irish fans. Dunne (28-1, 15 knockouts) undoubtedly became one of his country’s biggest stars overnight.

John Mellencamp: The singer’s 14-year-old son, Hud Mellencamp, won his first fight in the Indiana Golden Gloves tournament. He outpointed a boy named Tate Sturgeon 4-1 in a 132-pound bout in Indianapolis and fights next on April 16. I love boxing – and passionately support the right to take part in the sport – but I always tell people I wouldn’t want someone I care about to step into the ring. Doesn’t the elder Mellencamp know that the brain wasn’t meant to be jostled the way it is in every fight? And it’s not like the kid is fighting for a better life; papa’s rich.

Yory Boy Campas: I remember thinking when Campas fought Oscar De La Hoya that the former titleholder from Mexico was past the point at which he should retire because of all the wars he’d been in. That was six years and 21 fights ago. Campas, 37 going on 57, reportedly was outpointed by prospect Marcos Reyes on Sunday in Mexico in his 106th fight; he’s 92-14, with an amazing 74 knockouts. He doesn’t win much any more — he’s 7-8 in his last 15 fights – but apparently remains competitive against journeymen-level opponents. He was 56-0 (50 KOs) when he was stopped by Felix Trinidad in 1994.

Ruslan Provodnikov: Provodnikov is from Siberia and has fought in Russian, China and the United States. And undoubtedly he’s pleased fans all along the way. The muscular junior welterweight dominated capable Esteban Almaraz on Friday with scary aggression, the kind with which one fighter wants to tear the head off another. Almaraz avoided that fate but lost a one-sided six-round decision. Provodnikov (12-0, seven KOs) apparently isn’t a huge puncher but it’s difficult to imagine this runaway train slowing down any time soon.

Roy Jones Jr.: “I’m not going to call any people by their names, but if you’ve got a belt tied to your waist you already know,” he said after beating Omar Sheika on Saturday. I hope he’s excluding Chad Dawson; that’d be ugly.