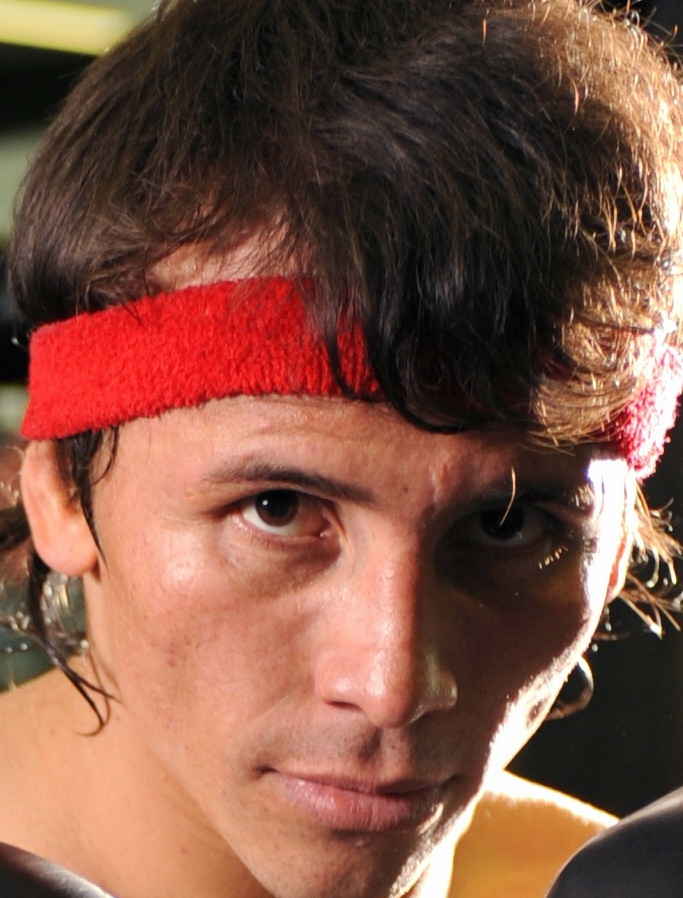 LOS ANGELES – Golden Boy Promotions CEO Richard Schaefer described the company’s stacked April 4 pay-per-view show titled “Lightweight Lightening” as “a tournament-style event” where the winners of the four 135-pound matchups “move on and face each other on a future show”.

If that idea comes to fruition, the main event for “Lightweight Lightening II” may have been decided at Monday’s kick-off press conference for the four-bout telecast from the Frank Erwin Center in Austin, Texas:

The two former 130-pound titleholders from South America had to be separated after exchanging words and engaging in a heated stare down towards the tail-end of the presser that took place at the Millennium Biltmore Hotel.

There’s no doubt that the undefeated KO artist from Venezuela and the fearless brawler from Argentina would make for wild, all-action fight, but first they have to get past their April 4 opponents, neither of whom is a walk in the park.

Valero (24-0, 24 knockouts) will face top-10 lightweight contender Antonio Pitalua in the 12-round final fight of the card. Barrios (47-4-1, 34 KOs) will face fellow former 130-pound titlist Carlos Hernandez in the opening 10-round bout of the pay-per-view broadcast.

Despite the order of the fights, Schaefer says there is no undercard on the HBO-distributed pay-per-view show.

“There are four co-main events on this show,” he said. “These are evenly matched fights between fighters who have all held at least one world title or interim title.”

Schaefer’s sentiment was echoed by Hernandez (43-7-1, 24 KOs), a 17-year veteran on the comeback trail after taking two years off.

“Each fight on this card could be its own main event,” said Hernandez, a strong-willed pressure fighter known for his durability.

The L.A. native who is now based in San Antonio, Texas vowed to give the fans their money worth and Barrios all he can handle.

However, Barrios, one of the sport’s more rascally characters, seemed dismissive of Hernandez.

He was more interested in creating a spectacle than commenting on his April 4 matchup. Wearing a pair of oversized shades that have sort of become his trademark, the shaved skulled Argentine entered the press conference with a boom box that blasted a Spanish-language pop song about himself. Once Barrios was at the podium, he made Golden Boy Promotions matchmaker Eric Gomez, who acted as his interpreter, blush with off-color remarks about Hernandez.

Think of Barrios as Ricardo Mayorga Lite, and you’ll get the picture. He appeared bored after he took his seat at the dais, until it was Valero’s turn take the podium.

Valero made a comment in Spanish that when translated into English by his new manager Jose Castillo sounded something like this:

As the long-haired bespectacled fighter made his statement, Barrios stood up in his seat and began yelling at him in Spanish. Casamayor, who sat at the table in front of Barrios and next to the podium where Valero stood, began to crack up as he egged on the suddenly irate Argentine.

The angry words of Barrios were not translated, but the responses of Valero – who often paused for dramatic effect as his vocal antagonist ranted on – were:

“I apologize for the interruptions,” Valero said as he closed his eyes in the manner that someone struggling to keep calm does. “This rude gentleman behind me, he’s like Mayorga. He’s ignorant.”

Maybe so, but Barrios is also persistent. He kept chiding Valero until the southpaw slugger stopped talking and with a cold look on his face, slowly turned around to face him.

Barrios got up, leaned forward on his table and motioned for Valero to “bring it on”. Fists clinched, and with his manager and trainer Ken Adams getting out of their seats to restrain him, Valero stomped-feinted to get a reaction out of Barrios, who laughed maniacally after finally getting some kind of reaction from the underground sensation.

Cooler heads prevailed. Valero, the last fighter to address the media, had said all he had to say, anyway.

The power puncher, who recently signed with Top Rank, isn’t much for trash talking. He’s more about action.

Adams, who has trained Valero in Las Vegas for close to one year, says the L.A. media was almost treated to some of that action.

“Everyone is giddy about that little scene but something was closer to happening than they know,” Adams said after the press conference. “Valero’s very hot headed.”

So is Barrios. But what set him off?

“That Valero guy was talking s__t about the older guys on the card,” explained Casamayor, with a translation assist from his co-manager Luis DeCubas Jr. “He said 75-percent of the fighters on this show are in their late 30s and will be finished with boxing by the end of the year.”

Valero, who is 27 years old, is half-right. Most of the fighters on the card are in the mid-to-late 30s, but that doesn’t mean they aren’t formidable or can’t continue to compete at the world-class level.

Pitalua (46-3, 40 KOs), who Valero will fight for the WBC’s interim lightweight title, is 39 years old. However, the Mexico-based Colombian is on a 14-fight win streak (all by KO) and is coming off an impressive sixth-round knockout of former interim titlist Jose Armando Santa Cruz.
Hernandez is 38, but the veteran hung tough with the future hall of fame likes of Genaro Hernandez, Floyd Mayweather Jr. and Erik Morales, and had enough left in 2005 to engage Jesus Chavez in a fight of the year candidate.

Casamayor (36-4-1, 22 KOs) is 37, but Cuban master knocked out 28-year-old Katsidis (24-2, 20 KOs) last March and was even on the scorecards with Juan Manuel Marquez before getting caught by the new RING lightweight champ in the 11th round of their showdown last September.

Barrios is 32, but his only losses this decade have been against Acelino Freitas, Joan Guzman and Rocky Juarez in very competitive fights.

Barrios had Freitas, 33-0 (30) at the time, down twice before he was stopped in the 12th round of a barnburner. He’s obviously not intimated by guys with undefeated records and high KO percentages, and he obviously believes he has many years of fighting left in him, which is why he took exception to Valero’s comments.

According to DeCubas, Barrios told Valero: “Who are talking about? Who are you talking to? If you’re going to talk s__t, you have to name names. Call someone out. Call me out!”

“I should (call him out),” Valero said after the press conference. “I don’t like the way he handles himself. He’s disrespectful. Maybe we will fight one day.”

Fight fans will be lucky if it happens sooner rather than later.