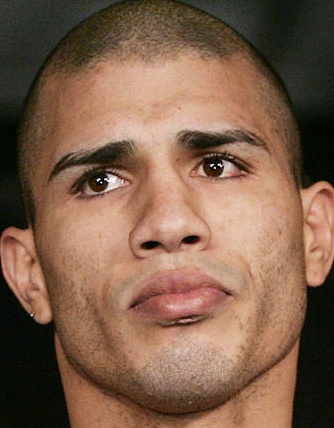 Al Laney went to Harlem one winter day in 1944, searching for Sam Langford. Laney, a veteran writer for the “New York Herald Tribune,” had Langford in mind for a “Where are they now?” piece. The only problem was that Langford, blind and broke after a boxing career that spanned more than two decades, had become a recluse. Several people suggested the old fighter was probably dead. Still, Laney persisted until he was directed to a rooming house on 139th St. in New York City .

The building's landlord brought Laney to a cheerless little room at the end of a hallway. Laney peered inside and saw a hulking figure sitting motionless on the edge of a bed. It was the man Jack Dempsey called “the greatest fighter we've ever had.” It was Sam Langford.
Laney's visit resulted in a story for the ages.

“His days are all alike,” Laney wrote. “He rises early and two small boys lead him to a restaurant for breakfast. He is back in his room by 1 o'clock, and then he just sits in the dark until late in the afternoon when he goes out to eat again.” Laney added, “He laughs all the time he is talking, and his laugh is so infectious, his face so expressive, you forget he is blind.”
It's impossible for contemporary fans to realize the impact Laney's article had on readers. Within three weeks a group of New York business owners organized a Sam Langford fund. The nation-wide drive that followed became a story in itself. Perhaps Americans had been worn down by the war in Europe , and simply craved a story with a happy ending. Nearly $11,000 was raised, a significant amount in 1944.

Langford fought during the era of color lines, fixes and no-decision contests. During his best years, he defeated one of the great lightweights (Joe Gans); earned a draw with one of the top welterweights of all time (Barbados Joe Wolcott); went the distance with one of history's top middleweights (Stanley Ketchel); and demolished a Hall of Fame light-heavyweight (Philadelphia Jack O'Brien).

Time has blurred the facts surrounding Langford's 1906 bout with Jack Johnson. The 15-round decision went to Johnson, but The Boston Globe commented, “Langford is deserving of a lot of credit.” Johnson and Langford met again three days later for a three-round exhibition. The sparring grew heated. Langford once described it as the wildest nine minutes of his career.

Johnson never gave Langford his due while both fighters were active, but Johnson would later describe Langford in a French-published autobiography as “one of the toughest adversaries I ever met in the ring.”

The fact that Johnson never gave Langford a rematch became the driving point of Langford's mythology. When Johnson won the heavyweight title and made it clear that Langford wasn't in his plans, Langford declared himself “the colored heavyweight champion.” For the next decade Langford engaged in a violent, seemingly endless round-robin tournament with the other black heavyweights of the day, including Sam McVey, Joe Jeannette and Harry Wills.

Langford spent the final years of his career in Mexico. His eyes failing, he'd wade in close enough to land his old bombs, which were still potent enough to knock men out. At the end of a round he'd use the ropes to feel his way back to his corner. That's how it went until Langford retired at 43.

Doctors twice tried to restore his sight, but by the mid 1930s Langford was totally blind. He was occasionally seen feeling his way through Harlem, a cloth cap pulled down over his damaged eyes. In 1935 he was hospitalized after being struck by a taxi. A charity baseball game helped pay his medical bills, but by the time Laney found him, Langford was broke.

Not everyone was swayed by Laney’s revival of Langford. Veteran promoter Joe Waterman once griped to the Associated Press, “We have let sentiment sway us. The myth of Langford's greatness has grown with the years. It isn't true.”

But even without the sentimental tableau of Langford living in squalor, Langford would still be considered among the greatest of “uncrowned” champions. Former champ Jim Jeffries once said, “I think Sam Langford was just as good as (Joe) Louis.” Even Louis gave Langford high praise. “My old trainer, Jack Blackburn, told me that Sam Langford was the best of those old-timers, and he saw them all,” said Louis.

The International Boxing Hall of Fame inducted Langford in 1990. The IBHOF credits him with 297 total bouts, but boxrec.com lists him with 316. Historians dig up Langford fights like anthropologists digging up fossils.

“That article had a lot to do with it, and I may have been susceptible,” said Sugar. “Langford was always known as a great fighter, but he'd been forgotten; Laney rekindled the legend.”

Laney visited Langford again the next Christmas to write a follow-up story. This time Langford's small room was decorated for the holidays, and Langford was in good spirits. “To hear Sam laugh and sing is one of the most profound Christmas experiences a man can have,” Laney wrote.

The piece ended with a message from Langford: “You tell all my friends that I'm the happiest man in New York City. I got a guitar and a bottle of gin and money in my pocket to buy Christmas dinner. No millionaire in the world got more than that, or anyhow, they can't use any more. Tell my friends all about it, and tell 'em I said God bless 'em.”

The fund inspired by Laney's story remained Langford's only income until his death in 1956.

Al Laney (1896 – 1988) wrote about sports for more than four decades, winning several awards for his golf coverage and a 1979 induction into the tennis Hall of Fame. But his greatest work may have been the time he turned a shabby little room in Harlem into a place where a legend lived.

Don Stradley is a regular contributor to The Ring.