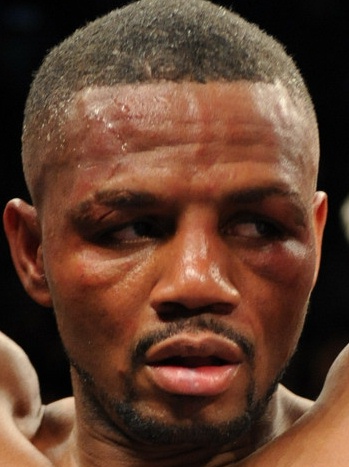 Nate Campbell (right) scored regularly to the body but also managed to land some big rights to the head of Ali Funeka Saturday night on HBO. Photo by Naoki Fukuda

Nate Campbell: The former lightweight titleholder started the weekend with another of his many missteps, losing his titles when he failed to make weight before his fight against Ali Funeka. And it almost went downhill from there. Through 10 rounds, Funeka seemed to be building up enough points to pull off a major upset. However, Campbell knocked Funeka down in the 11th and won the 12th to take the decision and move on to 140 pounds on the heels of a victory.

Ali Funeka: This isn’t to say that the tall, lanky South African didn’t put up a hell of a fight against Nate Campbell on Saturday. He did, proving he deserves to be a top contender. However, he came within a few points of becoming a triple titleholder. Can you magine what that would’ve meant in terms of fame and fortune back home? He cried after the decision was announced. I would’ve cried too.

Sergio Martinez-Kermit Cintron: We were looking forward to this fight, a slick, rising boxer-puncher fighting out of Spain against a fiery slugger from the U.S. However, the fight fell flat. Martinez looked pretty good but hardly special; Cintron seemed sluggish or confused — or both. He never landed that truly big shot we were sure would test Martinez’s chin. The bizarre ending of the seventh round was the most memorable moment, which doesn’t say much for the fight.

Martinez-Cintron, Rd. 7: Cintron is put down by a punch he believes was a head butt. Cintron appears to stand up a split second before referee Frank Santore reaches the count of 10, meaning the fight should go on. However, somehow the fight is stopped and it appears that Martinez is the winner. Then, apparently after Santore speaks with other officials, the fight then goes on. I still can’t figure out exactly what happened. Santore said he didn’t hear the bell, which doesn’t explain anything. No fighter could be saved by the bell.

Campbell: The veteran publicly criticized Joan Guzman when Guzman failed to make weight for their scheduled bout in September and then decided not to fight because of dehydration, costing Campbell a sizeable payday. Obviously, Campbell’s criticism was justified. So what does he turn around and do? In his next fight, against Funeka on Satuday, HE fails to make weight by three pounds. To his credit, at least he went through with the fight and described what he did as unprofessional.

Joey Gilbert: Gilbert took a vicious shot to the face from Jesse Brinkley that disfigured and appeared to break his nose on Saturday in Reno, Nev. From that point on, blood gushed all over Gilbert, Brinkley, the referee, those at ringside and at least one guy watching it on TV. Some fighters would’ve quit after the crushing blow; the pain must’ve been intense and he had difficulty breathing. However, Gilbert not only fought on but went the distance against a more-experienced fighter and never stopped firing back at him. Gilbert lost a decision but won the respect of those who saw the fight.

Cristobal Cruz: The IBF featherweight titleholder from Mexico defended his title for the first time against Frenchman Cyril Thomas in France. In spite of a hostile crowd – and presumably hostile judges – Cruz overpowered Thomas en route to a clear unanimous decision. Cruz won the vacant title by narrowly outpointing Orlando Salido in October.

HARDEST NAME TO LIVE UP TO

Ray Robinson: “The New” Ray Robinson, as he calls himself, is an undefeated welterweight out of Philadelphia. He’s 10-0 (four KOs) after stopping Darnell Jiles Jr. on Friday night. That means he’s 30 victories shy of the 40-0 start of Sugar Ray’s career. The original also was 128-1-2 before he lost again. Maybe the new Ray Robinson should’ve changed his name.

Julius Long: The journeyman heavyweight out of Detroit lost an eight-round decision to former heavyweight contender Ray Austin on Saturday in Sunrise, Fla. Nothing out of the ordinary there. However, Long is 7-foot-1.

Kermit Cintron: “I thought (Sergio Martinez) hit me with a head butt in Round 7. Nobody hits that hard.” Apparently, Cintron didn’t see the replay.