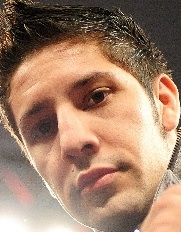 Best night of pro career: Fourth-round stoppage of tough Jose Alfredo Lugo on May 23 of last year. Lugo absorbed Molina’s punches for three rounds before mounting a fierce attack at the start of the fourth. Molina took Lugo’s best shots and came back with a vicious salvo of his own that set up a brutal right-hand punch that knocked the rugged journeyman out cold. Lugo has since earned a draw with Mike Dallas Jr. (5-0) and gone the distance with hard-hitting amateur stars Danny Garcia (9-0) and Adrien Broner (5-0).

Worst night of pro career: Struggled to a close six-round decision over Carlos Madrid on March 28 of last year. The heavier journeyman matched Molina’s strength on the inside while applying constant pressure and crafty infighting.

Next fight: Faces Joshua Allotey (15-6, 13 KOs) Friday, Feb. 6, in a scheduled eight-round bout at The Tachi Palace Hotel & Casino in Lemoore, Calif., in the Showtime-televised co-feature of “SHOBOX: The Next Generation” (11 p.m. ET/PT).

Why he’ll be a contender: Former high school wrestling standout is a natural athlete with tremendous physical strength, knockout power in both hands and the self-confidence that comes with such attributes and a Spartan work ethic. An affable personality outside of the ring, his aggressive style translates to fan-friendly fights that often end in spectacular knockouts.

Why he’s a pretender: Seek-and-destroy mentality sometimes leads to recklessness in the ring. The natural puncher often forgoes his jab and forgets technique while in pursuit of the knockout. Limited amateur background and average hand and foot speed contribute to his difficulty with quick boxers who utilize lateral movement.

Story lines: Although boxing was in his blood (both his father and grandfather were amateur fighters), Molina got a late start in the sport, instead focusing his teen years on high school athletics. The tall, rangy lightweight was a four-year varsity letterman in both wrestling and track and field at Charter Oak High School in Covina, Calif. Molina competed on the state level in wrestling, which he says helped foster the discipline that aided him during his brief amateur boxing career after high school. He compiled a 22-2 record en route to winning state Golden Gloves titles (’02 and ’03) and the national Blue & Gold tournament (’04). As an amateur, he was sponsored by Southern California Teamsters, whose members and families have given him loyal fan support during his pro career, often packing club venues to root for him. Says Dan Goossen: “My brother Joe and my son Craig told me John has star potential, and I saw what they were talking about the first time I watched him fight. He’s an all-action fighter. But I also signed him on his reputation for being a good but charismatic young man. He’s outgoing, witty and engaging. I think Ben Lira and his father gave him a good foundation as a fighter and a person.” Molina is not related to former junior lightweight titleholder John John Molina.