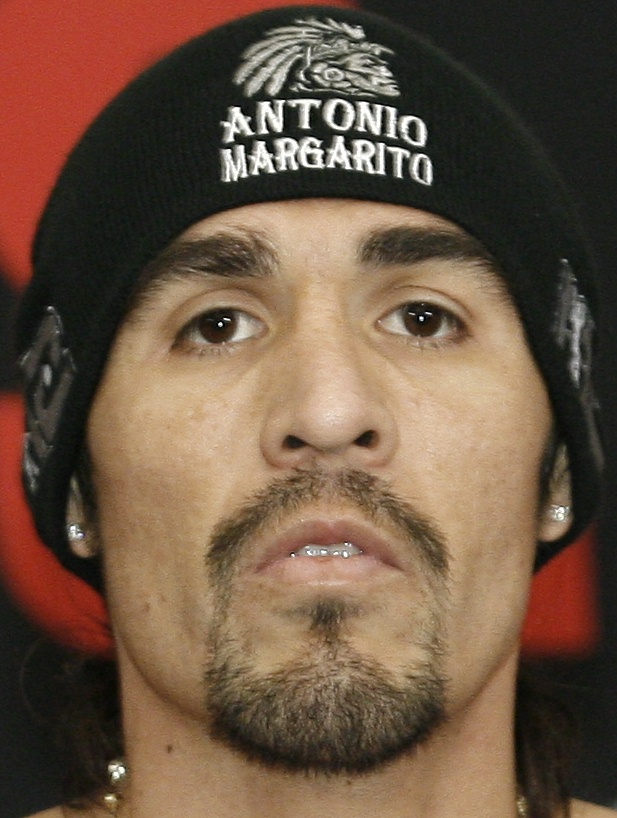 Naazim Richardson, Shane Mosley's trainer, was still livid Tuesday when he discussed allegations that Antonio Margarito had plaster in his hand wraps before he was forced to remove them on Saturday night. Photo / Tom Hogan-hoganphotos.com

Collins was the victim of one of the ugliest episodes in boxing history. In 1983, after he was pummeled by Luis Resto, it was discovered that trainer Panama Lewis had taken out some of the padding in Resto’s gloves.

Collins was left with permanently blurred vision, had to retire and ultimately drove his car over a cliff. The assumption was that he committed suicide because he could no longer fight. He was 22.

Thank goodness nothing like that happened when Margarito fought Shane Mosley on Saturday in Los Angeles.

But, if the allegations prove true, it could’ve happened. Mosley could’ve been Collins.

Shortly before the fight was set to begin, Naazim Richardson, Mosley’s astute trainer, was doing his duty by watching carefully as Javier Capetillo, Margarito’s trainer, wrapped the hands of his fighter.

At first, Richardson complained that Capetillo was taping too far down Margarito’s wrist and a commission official made him re-tape it several times. Then, when it came time to place a protective gauze pad over the fighter’s knuckles, Richardson felt it and could tell immediately that it was harder than usual.

Also, Robert Olvera, Mosley’s doctor, reportedly noticed a flaky substance on the pads that reminded him of the plaster doctors use to make casts.

“From there, I said, ‘Listen, this isn’t cool,'” Richardson said.

The pads were impounded by the California State Athletic Commission, which is conducting an investigation.

Hopefully, investigators will determine that the pads weren’t unusually hard after all. And, if it does prove to be true, Richardson allowed for the possibility that Margarito wasn’t fully aware of what was in his gloves.

That said, Richardson has no doubt about what he felt – a hard pad that could’ve seriously injured his fighter. Or worse.

“He could’ve killed Shane,” said Richardson, his voice rising in anger. “We’ve seen guys die on the up and up. You can kill him. That s— is ridiculous.”

Imagine for a moment ÔÇª

Margarito, not known as a one-punch knockout artist, batters Mosley from the opening bell with gloves as hard as his head. Mosley is proud and resilient, with one of the sport’s greatest chins.

He’s the type of fighter who would follow through on the macho proclamation common to boxing: “You’ll have to kill me to beat me.” He’d never give up.

Now imagine it’s late in the fight and, as Richardson suggested, the plaster has become more compact and even harder Mosley has taken a terrible beating but continues to fight. Finally, with Mosley fading badly, Margarito lands a barrage of hard, accurate punches and Mosley goes down.

And doesn’t get up. He’s taken by stretcher to an awaiting ambulance and rushed to the hospital, leaving witnesses with no option beyond prayer.

“I think Shane would’ve beaten him even if he had the (hard) pads,” Richardson said. “It would’ve been a tougher fight, though. I’ll tell you this: I wouldn’t want to find out. He could’ve endangered somebody’s life.

“This sport is tough enough. I’ve seen guys get hurt with 18-ounce gloves in training. And this guy is going to fight with 8-ounce gloves with extra s— on them?”

In the end, Mosley not only survived but thrived.

The new WBA welterweight title holder resurrected his image as one of the best fighters in the world by becoming the first man to knock out the iron-chinned Margarito. His future, even at 37, seems limitless.

But what of Margarito?

All the momentum he had built the past few years was stopped cold. A rising star, coming off a spectacular knockout of Miguel Cotto, was reduced to just another contender who took the kind of beating from which some fighters never bounce back.

And if they find plaster in the pads, it could haunt him. The obvious question: Is plaster the reason he finally reached the top of the boxing world after so many years as a journeyman?

The thought is heartbreaking.

“The only leeway I give him is that I don’t know if Margarito knew it was in there or not. I know the trainer (Capetillo) knew, but I can’t say whether Margarito knew,” Richardson said.

Then there’s impact on the sport.

Boxing must perpetually defend its character, or lack thereof in many cases. Coincidentally, Mosley’s admission that he used performance-enhancing drugs in 2003 hovered over him and the fight on Saturday.

The sport didn’t need plaster wraps. Richardson is angry primarily because he’s protective of his fighter but he’s also frustrated about public perception.

“My first reaction was I wanted to lean over and crack Margarito’s trainer in the mouth for this dirty s—,” Richardson said. “Man, we’re fighting at a high level. These are bad rumors for our sport. We don’t need people casting doubts on our athletes, assuming everyone is doing dirty s—.

“I think this is horrendous, myself.”

Richardson won’t say what action should be taken against Capetillo and Margarito if investigators determine plaster was on the wraps. Eric Gomez of Golden Boy Promotions, of which Mosley is a partner, said the firm has put its trust in the commission.

“We know the commission will take the appropriate action,” Gomez said.

However, Richardson still has a bad taste in his mouth.

“I can’t talk about legal ramifications,” he said. “They’ll have to be addressed by the commission. This was just too dangerous, though. How many other guys could’ve been hurt? I’m not making excuses for Cotto. My thing is that you can’t ignore this. It can’t be ignored.”

Michael Rosenthal's column appears on Wednesdays. He can be reached at [email protected]