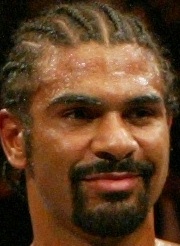 Heavyweight David Haye had an easy time with veteran Monte Barrett in November, but things could be considerably different if he lands a fight against Wladimir Klitschko. Photo / Tom Hogan-hoganphotos.com

David Haye: The cruiserweight-turned-heavyweight (22-1, 21 KOs) was expected to challenge for Vitali Klitschko’s WBC heavyweight title this summer. However, the elder of the Klitschko brothers (36-2, 35 KOs) decided to face mandatory challenger Juan Carlos Gomez (44-1, 35 KOs) in March instead.

David Haye: The once-beaten Englishman reportedly now becomes the leading candidate to face the younger of the Klitscho brothers, IBF and WBO titleholder Wladimir. Haye probably matches up better with the less-athletic Vitali Klitschko but will be pleased to fight anyone in the family because of the opportunity and payday. Of course, Haye ultimately will appear here as the biggest loser because he can’t beat either of the Ukrainian behemoths.

Chris Arreola: It looks as if the Riverside, Calif.-based heavyweight (26-0, 23 KOs) won’t get his shot at Wladimir Klitschko (52-3, 46 KOs) after all, at least not as soon as expected. It would’ve been a significant opportunity and big payday for one of the more exciting big men around. The good news is that he’ll have more time to refine his poor training habits and polish his skills.

Wladimir Klitschko: A match up against the well-known Haye will make for a much bigger promotion than one against Arreola. And it also might be less of a risk. Haye is a better boxer than Arreola but is naturally smaller, which would be a disadvantage for him against the 6-6¾ Ukrainian. Arreola is 6-4 and fights between 240 and 260 pounds. Haye is 6-3 but has never weighed more than 217 for a fight.

Jan. 10: Karoly Balzsay (20-0, 14 KOs) outpointed WBO super middleweight title holder and previously unbeaten Denis Inkin (34-1, 24 KOs) in Germany to become a major player in the division. He should enter THE RING’s Top 10. Inkin was rated No. 9 going into the fight. On the same card, WBO light heavyweight belt holder Zsolt Erdei (30-0, 17 KOs) outpointed Yuri Barashian (25-5, 17 KOs) in what turned out to be a non-title bout. Barashian failed to make weight. Balzsay and Erdei haven’t risen to the level of legendary Lazslo Papp but certainly are making noise.

Yuriorkis Gamboa: The 2004 Olympic gold medalist from Guantanamo (13-0, 11 KOs) overcame a knockdown to stop Roger Gonzalez (27-3, 18 KOs) in 10 rounds in a featherweight bout on Friday in Primm, Nev. Some believe he was the top prospect of 2008 after winning each of his five fights, four by KO. He apparently will take the torch from Joel Casamayor (36-4-1, 22 KOs) as the top Cuban in the sport.

Yuri Barashian: First, the light heavyweight contender from Armenia failed to make weight on Friday for what supposed to be a title fight against Erdei. Then, on Saturday, he lost a one-sided decision to the WBO titleholder, Barashian’s second consecutive setback in a major fight.

Antonio Margarito-Shane Mosley and Kelly Pavlik-Marco Antonio Rubio: In Los Angeles, Staples Center officials opened up upper-concourse seats because tickets are selling well for Margarito-Mosley. And in Youngstown, Ohio, Pavlik’s hometown, the middleweight champ’s loss to Bernarnd Hopkins apparently hasn’t affected his popularity. Promoters said that 5,000 tickets were sold in the first 12 minutes they were on sale.

Trainer Rudy Hernandez: “I think (Antonio) Margarito is far from being a great fighter. He’s a hard-working fighter, not the most talented.”