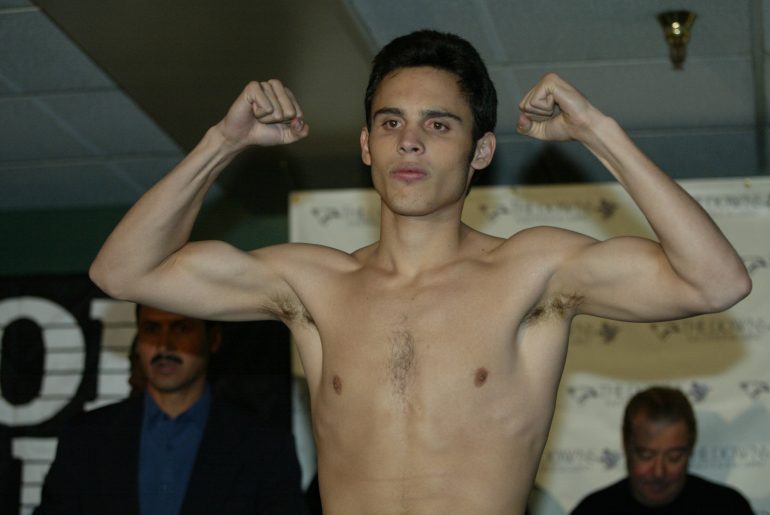 Until he makes clear what happens next, there will be a lot of pressure on Oscar De La Hoya to announce his retirement. But why should he? Sure, he has enough money to last several lifetimes, but when has that ever been enough for any world class athlete? It’s the desire to be the best that keeps most of these guys climbing the ring steps. And if they have any fight left, they just can't go out on a loss like the one De La Hoya took against Manny Pacquiao. It's undignified.

It's not as though De La Hoya can’t fight anymore; he’s just been fighting the wrong guys. So he can’t beat Floyd Mayweather and Pacquiao. Big deal. No one else can either. For what we should assume will be his farewell fight, De La Hoya must forget about chasing after top-echelon guys. He’s not at that level anymore. If he’s going to fight again, he must make it a fight that is compelling and interesting. That means against a guy with whom he has history, unfinished business, or who presents an interesting angle.

If you can stand one more list this holiday season, here’s one made up of the five guys I’d pay cash money to see De La Hoya face in his farewell fight.

Yes, De La Hoya ran the last four rounds of their first fight. Get over it. You’re allowed to when you box rings around your guy for eight rounds. That Trinidad got the decision that night still bugs De La Hoya, and he’s wanted to get “Tito” back in the ring ever since. He hasn’t been able to, at least in part because Trinidad wouldn’t fight below 160. But what’s to stop them now from agreeing on a catch weight? Trinidad looked just bad enough against Roy Jones so that De La Hoya shouldn’t care what he weighs, and De La Hoya has slowed down enough so Trinidad might feel like he can get him to stand still. Trinidad’s fans come out in droves for this one. Yes, still.

Both of their previous fights were close and competitive, but it’s the second one that begs for yet another meeting. And not just because we know now that Mosley was all hopped up on steroids for the last one, but because there are those who believe still that De La Hoya deserved the decision that night in Las Vegas. Here’s another nice thing about this one: It doesn’t matter how Mosley does against Antonio Margarito. In fact, it works out better if he loses. A third Mosley-De La Hoya fight is a nice way to go out for both of them.

Few fighters hang around long enough to face a father and then his son, but it’s happened. In 1936 Jersey Joe Walcott stopped Phil Johnson in Philadelphia and, 14 years later, did the same to his son, the great Harold Johnson. And one-time heavyweight title challenger Joe Bugner dropped decisions to both Joe and Marvis Frazier. Still, this storyline is irresistible and the questions around Junior’s real ability make it an intriguing matchup. Moreover, from a box office perspective, you cannot go wrong matching De La Hoya against a Mexican hero – or his son.

It’s true, there’s no history between De La Hoya and Judah, and Judah remains a Top 10 contender at welterweight (No. 7 according to THE RING). That makes him something of an anomaly in this group. We all know his weaknesses by now, but more or less respect him nonetheless. But he’s just flawed enough and just worn down enough that he doesn’t blow De La Hoya out of the ring and in my view makes an interesting fight. And a win over a Top 10 guy like Judah, if he can pull it off, enables De La Hoya to leave the game with some dignity.

Before you reply that Quartey is retired, remember that he was retired too for five years before coming back in 2005 and mounting a very respectable comeback, which included a win over Verno Phillips and a controversial loss to Vernon Forrest. There have been rumors of another comeback for a while. The first De La Hoya-Quartey fight, 10 years ago now, featured knockdowns by both guys and a hellacious last-round rally by De La Hoya to pull out the win. Of course neither guy is now what he was then. But neither were Ray Leonard and Tommy Hearns when they met eight years after their first match. It was still a big fight and a good one and just the kind De La Hoya should look for if he’s not ready yet to leave.

Some miscellaneous thoughts from last week:

With only good intentions, my wife gave me for Christmas George Kimball’s book, “Four Kings – Leonard, Hagler, Hearns, Duran and the last Great Era of Boxing.” I wouldn’t have thought it possible to make an up-close account of what really was a golden age tedious and tiresome, but Kimball manages to pull it off. ÔÇª

Whether or not the WBA, in its infinite wisdom, makes it mandatory, there will be a rematch to the Nicolay Valuev-Evander Holyfield fight. Why? Everyone involved makes a nice payday and, in a rarity for a prizefight, the impotence of the contestants guarantees no one will get hurt. ÔÇª

Anyone who says there is no off-season in boxing hasn’t been around the last couple weeks. I’ve been in bone yards that were more active than boxing has been lately. ÔÇª

I agree it’s distasteful that A-listers Kelly Pavlik and Miguel Cotto will soon be wasting their time against the under-qualified duo of Marco Antonio Rubio and Michael Jennings, respectively, but this demand we have for big fights every time out is a recent affliction; we’ve gotten spoiled. Also, both Pavlik and Cotto got their heads handed to them last time we saw them. They each can use an easy one, though I’m not entirely convinced Rubio will be easy. ÔÇª

The most passionate response I can muster to the rumor that Paul Williams may face Winky Wright in April is a blank stare. ÔÇª

It’s been said before but bears repeating: That Mosley is likely to get thrashed by Margarito makes his pursuit of the fight all the more impressive. I’m in the minority that thinks Mosley’s accomplishments have been overblown, but there is no denying he is all fighter.

William Dettloff can be reached at [email protected]