Fights we’d like to see in ’09, but probably won’t 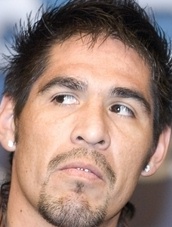 There are many compelling fights we’d like to see in 2009. And, thank goodness, some of them will actually happen.

Will the two best heavyweights in the world – the Klitschko brothers – ever meet? Not a chance. Will Joe Calzaghe actually fight someone younger than 40? Doesn’t seem so. Will promoters angry with their negotiating partners get over it and make fights the fans want to see? Not always.

Here’s a look at 10 fights we’d like to see in the coming year – but probably won’t.

Why we’d like to see it: OK, this is fantasy. The concept is fascinating, though, isn’t it? No. 1, we’d learn who truly is the best heavyweight in both the family and the world. And it would be an interesting fight. Wladimir has the athleticism and speed, not to mention a killer jab and frightening right hand. He also will always have a suspect chin. Vitali has similar fundamental skills but isn’t as athletic. However, he appears to be the much tougher – mentally and physically – of the two. They should at least let us watch them spar.

Why it won’t happen: They’ve said repeatedly that they’d never fight. So we can only imagine.

Why we’d like to see it: Calzaghe has beaten golden oldies Bernard Hopkins and Roy Jones Jr., barely outpointing the former and embarrassing the latter. Now we’d like to see the unbeaten Welshman face a young, gifted fighter in his prime to prove he really is the best light heavyweight in the world. If Calzaghe wins, it would be much more difficult to question his credentials. If he loses, well, at least he took the toughest challenge out there. That would earn him the admiration of those who are lukewarm to him now.

Why it won’t happen: Dawson’s promoter, Gary Shaw, hungers for the fight and says HBO is behind him. And why not? It would be Dawson’s first megafight and a victory would catapult him to stardom. The problem is that Calzaghe will weigh the considerable risk against the reward (Dawson doesn’t have the name recognition to generate big pay-per-view numbers) and say, “No thanks.” Still, Shaw remains optimistic. “If it was a horse race, I’d say the chances are in the middle of the field,” he said.

Why we’d like to see it: What’s not to like about this hardcore fan’s ultimate dream fight? It would pit the reigning pound-for-pound king against the sport’s best pound-for-pound puncher; two explosive, fearless southpaws in their primes would collide in the center of the ring.

Why it won’t happen: Pacquiao’s 2009 schedule is already filled by much bigger names than an underground internet phenom who has been banned from fighting in the U.S. since failing an pre-fight MRI exam in 2002. Pacquiao is scheduled to take on THE RING junior welterweight champ Ricky Hatton in May; a victory in that high-profile clash will likely lead to an even bigger showdown, against Floyd Mayweather Jr., later in the year. Although Valero, who is rumored to be shopping around for a U.S. promoter, was recently cleared to fight in Texas, a fight between Pacquiao and him doesn’t make sense in ’09 as the wayward Venezuelan still needs to establish himself to the casual boxing audience on U.S. television.

Why we’d like to see it: It would pit THE RING 140-pound champ vs. THE RING’s No. 1 junior welterweight contender. Bradley, the 25-year-old Southern Californian who traveled to England and defeated Hatton’s UK rival Junior Witter for a title belt last year, possesses superb conditioning, underrated technique and an aggressive mentality that would mesh well with Hatton’s greater experience and physical style.

Why it won’t happen: The first half of ’09 for Hatton is taken thanks to his spring showdown with Pacquiao. Should the Manchester native come out victorious on May 2, it’s a sure bet that he’ll be done with fighting unknown against fellow beltholder Kendall Holt on April 4) in favor of proven elites like Mayweather and Juan Manuel Marquez.

Why we want to see it: It’s a fight between the top two lightweights in the world – Marquez, the recently crowned RING champ, and Campbell, THE RING’s No. 1 contender and holder of three major titles. It’s also a showdown between two seasoned veterans who have taken the hard road to their recognition. The winner would be a most deserving undisputed 135-pound king.

Why it won’t happen: Marquez is not one to avoid tough challenges, as his RING title win over Joel Casamayor and his first defense against Juan Diaz in February attest to. Campbell, who has fought Casamayor and beat Diaz for the belts he currently holds last year, is as fearless as they come. However, THE RING champ has a history with Pacquiao. If the Filipino icon beats Hatton and Mayweather does not come out of retirement (as expected) to challenge him, Marquez has to be considered the front-runner for a crack at the current pound-for-pound king. Although Campbell would be a worthy notch on Marquez’s belt, Pacquiao (or Hatton, should the Brit win in May) not only presents the biggest payday of the Mexican’s career but also an opportunity to make history as the first fighter from Mexico to win titles in four weight classes. Also, there is a price to pay for holding three alphabet titles. Campbell, who hasn’t fought since his triple-belt winning effort in March, might be busy making mandatory title defenses throughout ’09, beginning with the dangerous Ali Funeka on Feb. 14.

Why we’d like to see it: Donaire handed the rugged Darchinyan his only loss with a crushing left hook in the fifth round when they met in a flyweight bout last year. Since then, Darchinyan has bounced back with a controversial draw against Z Gorres in the Philippines and three victories. The last was a stunning ninth-round knockout of highly regarded Cristian Mijares to unify three of the four junior bantamweight titles. Meanwhile, Donaire continues to roll, making what would be a lucrative rematch a no-brainer.

Why it won’t happen: Shaw said he won’t allow it to happen because Donaire bolted from his promotional firm to Top Rank. “No loyalty,” he said. “I wouldn’t reward (Donaire) with the opportunity or the payday. (Darchinyan) has a lot of options. He can stay at 115 or move up to 118 or even 122.” One possible matchup for Darchinyan could be Fernando Montiel, if he beats Donaire on March 15.

Why we’d like to see it: Pavlik’s foray into higher weight classes ended in disaster when he was embarrassed by 40-something Hopkins but he remains THE RING’s middleweight champion. And when he can land punches, as he couldn’t against Hopkins, he’s an exciting fighter. Meanwhile, No. 1-rated Abraham appears to be the complete package – skillful, powerful, fighting spirit. It would seem to be a can’t-miss, thrilling matchup of two young fighters in their primes.

Why it won’t happen: The Pavlik and Abraham camps reportedly have talked about a fight this summer. However, Pavlik isn’t ready for such a challenge and he appears to know it. He was exposed against Hopkins as a game, but limited boxer who needs more much polish. That’s why his people approached trainer Freddie Roach about working with him. If Pavlik fights Abraham in six or seven months, he’d get clobbered. If he takes a year to refine his skills, it might be a different story. Also, Abraham doesn’t have the name recognition to guarantee Pavlik a big payday. Why take the risk now?

Why we’d like to see it: No. 1, they are two of the best fighters pound-for-pound in the world. How often do two well-known studs in their primes have an opportunity to give the fans what they want and make big money? And, No. 2, a rematch is clearly warranted. Their fight in July of last year was two fights in one, Williams baffling Margarito for half the fight and the Mexican finally picking it up in the second half. Ultimately, Margarito waited too long and lost a close decision. In a second fight, Margarito undoubtedly would fight aggressively from the beginning. It would be fascinating to see how Williams reacts.

Why it won’t happen: Margarito’s promoter, Bob Arum, reportedly doesn’t want to do business with Williams’ advisor, Al Haymon after negotiations to have Williams fight Pavlik fell through. And Arum seems to be adamant. Meanwhile, Dan Goossen, Williams’ promoter, says he’s not even pursuing the fight any longer. He’s open to any opponent between 147 and 160 pounds. And he doesn’t buy the Haymon factor; he says Margarito simply doesn’t like his chances in a rematch with Williams. “That’s a bunch of bull,” Goossen said. “Bob Arum doesn’t turn down millions of dollars because he doesn’t like someone. If that were the case, he’d have been out of boxing 30 years ago.” Then Goossen tore into the notion that Margarito is the top welterweight even though Williams beat him: “Anyone who calls Margartio the best welterweight in the world should go back to Boxing 101. If you’re the best, you don’t run away from someone like he did.”

Why we’d like to see it: This fight matches one of the most avoided boxers of the ’90s against one of the most feared fighters of this decade, and they happen to be THE RING’s Nos. 1 and 2 junior middleweight contenders. It’s an interesting 154-pound matchup that would pit Forrest’s experience and technique against the Punisher’s size, pressure and volume punching. The fight could also be made into a solid attraction in Atlanta, where Forrest lives (and is less than a three-hour drive from Williams’ hometown of Augusta, Ga.).

Why it won’t happen: Both Forrest and Williams are managed by Haymon, who isn’t keen on putting his fighters in the same ring. Also, Forrest has notoriously avoided southpaws his entire pro career. If the 37-year-old veteran ever decides to change this policy, he’s not going to start with a 6-foot-3 lefty who averages 100 punches per round.

Why we’d like to see it: The reigning RING 122-pound champ against THE RING’s No. 3 contender is a can’t-miss, high-level slugfest; a showdown between a current top-10 pound-for-pound entrant and a future pound-for-pound player. Vazquez, perhaps the bravest fighter in the sport, is a proven warrior with vast championship experience. However, the 25-year-old Puerto Rican southpaw has superior technique and phenomenal punching power, which was evident in last year’s first-round KO title win over Daniel Ponce de Leon and two subsequent opening-round stoppages over normally durable opponents.

Why it won’t happen: After his grueling rubber match with Rafael Marquez in March, Vazquez took a well-earned vacation for the rest of ’08 to recover from his classic three-fight series and to recoup from eye surgery. The 31-year-old veteran will not be ready to enter the ring until June of ’09 and his manager, Frank Espinoza, is not going to kick off the year with a dangerous matchup unless the star of his stable is making a career-high payday. Despite Lopez’s obvious talent and potential, he’s still establishing his name and thus is not the most marketable opponent for Vazquez. A fourth fight with Marquez is still the most lucrative option for Vazquez, who has also expressed a desire to test waters at featherweight, where old-foe Oscar Larios currently resides and holds a title. The guess here is that fourth bouts with Marquez or Larios will occur before a first bout with Lopez in ’09.