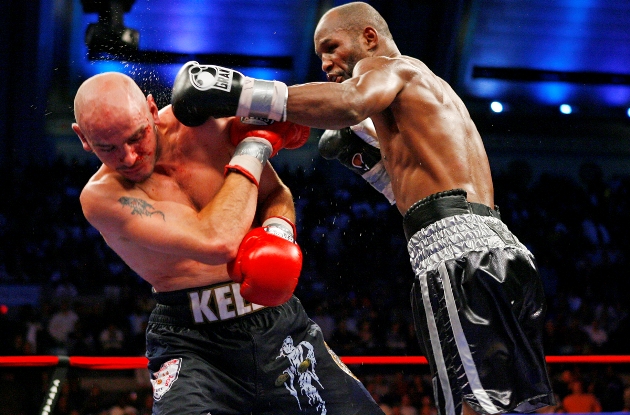 If Jack Johnson were alive today, he’d be shaking his head in his hands at the station of the African-American fighter in boxing.

Want to make a quick judgment? Simply look around the next time you’re sitting ringside at a major fight. Make a mental inventory of the number of African-American fans you see in the stands and more importantly how many inside the ring on world-class fight cards today.

Some call it a crisis. Some recognize it as a correctable problem. Others say that it’s just a sign of the times; that the globalization of boxing has eased out African-American fighters, giving way to talented Eastern European boxers.

What is certain is that only oneÔÇöthat’s one African-American fighter is in The Ring’s pound-for-pound top 10, Bernard Hopkins. In the February 2009 issue of The Ring, 20 of the 176 fighters rated are African-Americans.

Compare that to 10 years ago, when in the February 1999 issue of The Ring there were five African-Americans rated in the top 10 (Roy Jones, Evander Holyfield, Mark Johnson, Pernell Whitaker, and Shane Mosley). What’s more, 43 of the 170 fighters rated were African-American.

Take a look at the pathetic shape of today’s heavyweight division. In the February 2009 issue of The Ring, not one African-American was rated in the top 10. Not one. Now go back 10 years ago and you’d find six (Evander Holyfield at No. 1, George Foreman No. 3, Michael Grant No. 4, Michael Moorer No. 5, Shannon Briggs No. 6, and Chris Byrd No. 7).

“We are in a crisis stage,” said Hopkins, who at 43 holds the mantle of today’s African-American fighters. “This change didn’t happen in the top 10 last month, it came gradually. Look at the change, with the Eastern Europeans in boxing. Look at the champions and titlists, they are European. African-Americans ruled the heavyweight division. That’s not the case anymore. There is a lack of talent and lack of bright stars.

“Stars aren’t being produced. It goes all the way down to the amateurs. The average 17-, 18-, 19-year-old African-American kid, they don’t make the Olympics, they turn pro. They turn pro and they’re not ready. The future of the American fighter is in real danger, especially the African-American fighters. Go into the gyms, you’ll see boxers and trainers, but I don’t see someone on the level of Roy Jones, Bernard Hopkins, Floyd Mayweather, Sugar Ray Leonard. The next two or three years are going to be very important.”

Hopkins said the lure of the streets takes away many potentially talented African-American fighters. Teenaged athletes today simply aren’t shaped from the same discipline Hopkins had.

“Do you think some kid today who can make quick thousands on the street is going to wake up at five in the morning for a five-mile run, do you?” the former middleweight world champion and future Hall of Famer asked. “That’s not going to happen. The attention span of these kids today is a second. I’m not giving up. I don’t think anyone should give up. There is a problem with discipline over the long haul. The average inner-city kid, they’re not Harvard graduates, they have short attention spans. But that doesn’t mean we should turn our backs on them. We all have an obligation to go back and get kids involved with boxing again, the African-American fighter can’t give up.”

Hall of Fame trainer Emanuel Steward thinks there are plenty of great African-American fighters today. They’re just outside linebackers in the NFL and power forwards in the NBA. He sees more inner-city kids gravitating towards football and basketball, leaving boxing behind as an afterthought.

Plus, Europe has finally caught up. Joe Calzaghe, Ricky Hatton, the Klitschko brothers rule the sport.

“These other countries are more focused into boxing, especially in Eastern Europe, than the black kids in the inner-city,” Steward said. “Those kids want to be basketball and football players. That’s what they want to do. Latin kids are going into the gyms in droves. It’s just how the sport changes now and it’s going to stay that way for awhile.

“One of the problems we have, and no one wants to hear this, is that there are no more trainers. We have no trainers in the inner-city. The kids in Europe are getting a better amateur background and they teach basics. Our kids don’t have trainers who teach anymore. They’re conditioners. The European fighters are more disciplined and focused than our black kids.”

If fighters like Hopkins are the present, then Chad Dawson and Daniel Jacobs are the future of African-American fighters.

Jacobs, a 21-year-old middleweight with a 13-0 (12) record, broached an interesting point.

“African-Americans are much better off (socio-economically) than they were 30, 40 years ago,” said the budding prospect who is one of the rising young stars in the game. “When African-Americans dominated the sport, they had their backs against the wall and had no other choices than to go into boxing. They trained so hard and boxing was all they had. Maybe that’s why you might not find another Bernard Hopkins or Floyd Mayweather again, because they were very dedicated to the sport. They trained accordingly. Young people don’t commit to boxing like they should.

“I don’t know if it’s being sidetracked to the money and the fame. But I saw it happen to my peers, not just with boxing in general. Back in the day, you used boxing to get out of the hood. Jack Johnson and Muhammad Ali had something to prove and live for, but there are so many opportunities that black kids have today that they didn’t have 20 years ago.”

What boxing needs is a great African-American heavyweight that everyone could identify with, says Showtime boxing analyst Steve Farhood.

“Because boxing is an individual sport, all it will take is one fighter, probably a heavyweight, to change the perception of where the African-American fighter is,” Farhood said. “The right guy comes along and that solves a lot of ills.”

But Farhood tends to agree with Steward as to where the great black fighters are today.

“If there is a dearth, that’s if, it’s partly because of the globalization of boxing. The tradition of boxing in the Hispanic culture seems to be heavier and meatier than the African-American culture, at least it does today. The increase of Eastern Europeans and Latin fighters, the numbers of African-American fighters figures to go down. I don’t think anyone can argue the young inner-city kid is likely to idolize and NFL player or NBA player (rather) than a boxer. There is a shallow pool out there, and it’s a problem. But I won’t go as far as saying we’re in a crisis.”

But someone will emerge. Hopefully, someone from the Andre Wards, Dawsons, Daniels, and Peterson brothers out there.

“It’s fairly obvious what’s going on,” HBO ringside analyst Larry Merchant said. “You usually extract quality from quantity. You may get kids to occasionally come out, but not in the great numbers they once did. That’s something we all have to accept. Boxing has become more global. That’s one aspect of it. It’s no longer part of the social fabric of this country, part of the mines and the farms and the mills, with kids using boxing as a way to fight out and up. Inner-city youngsters don’t dream about being heavyweight champion anymore. They dream about being basketball and football players. They dream about college scholarships, and that’s a good thing.”

Dawson leaned heavily towards basketball. He was a very good high school player. But Dawson received a stern shove in boxing’s direction. If it wasn’t for poor grades preventing him from playing in high school, Dawson would have pursued basketball in college and possibly tried to play professionally in Europe.

Boxing would have been missing a young star.

“My dream was to go to the NBA, that’s what I wanted to do, but boxing was in my blood,” the IBF light heavyweight titlist said. “From being a little kid, from middle school and high school, I got caught up with the hoop dream. When I got to high school, you see all the basketball players with all the attention and all the girls. You see that and that’s what you want.

“I chose boxing as a last resort. My two older brothers were fighters, my father was a fighter. When I was 17, I wasn’t running. I didn’t start taking boxing seriously until I was 23. I would box, make some money and just blow it. I was able to get by, (but then) I started getting committed. I was lucky I found my calling. I don’t know if there are guys out there willing to wait until they’re 23 to get going, but I think there is hope for the young black fighters in this country. I have a responsibility to help.”

Somewhere, you’d like to think, Jack Johnson is smiling over the attitude of Hopkins, Dawson, and Jacobs. They all feel obligated to give back to the sport that has provided so much for themÔÇöso much rich history.