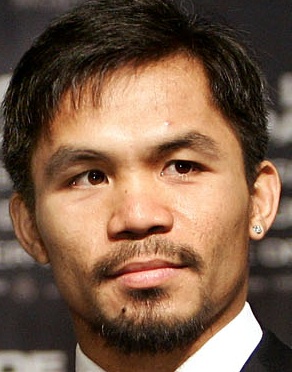 Last December, Floyd Mayweather was recognized as the best boxer, pound for pound, on the planet. Now that honor belongs to Manny Pacquiao. Will Mayweather un-retire and challenge the PacMan in 2009? Photo / Ed Mullholland/Fightwireimages

A year ago this time, THE RING and consensus had unbeaten Floyd Mayweather Jr. firmly ensconced at No. 1 in the pound-for-pound ratings.

Could he end up back on top at the close of 2009? Manny Pacquiao might have something to say about that.

Indeed, the most conspicuous change in the final RING ratings of last year compared to the current ratings is the absence of the “retired” Mayweather and the ascension of Pacquiao to the top of the boxing world.

Mayweather had dismantled Ricky Hatton on Dec. 8 of last year and was a fresh 30 years old. However, he announced his retirement on June 6 of this year, three months before a scheduled rematch against Oscar De La Hoya.

That opened the door for Pacquiao, who immediately took over the No. l spot and fortified his position with a remarkable 2008.

And on Dec. 6, he leap-frogged over 140 pounds to 147 and stunned the boxing world by knocking out De La Hoya in eight rounds in the year’s biggest fight.

Three fights, three weight classes, three impressive victories. He left no doubt that he belongs on top of the pound-for-pound ratings.

That could change, though. Rumors are swirling furiously that Mayweather plans to come out of retirement and attempt to reclaim his throne against Pacquiao in what might be the biggest-possible matchup in the sport.

First, Pacquiao is expected to fight Hatton at 140 pounds in May. If the Filipino phenom wins that fight, Mayweather and a major shake up in the ratings looms as a realistic – and enticing – possibility.

In the Top 10, Mayweather and Winky Wright (who hasn’t fought in a year and half) were replaced by welterweight titleholder Antonio Margarito and junior flyweight Ivan Calderon while the other eight moved up or down.

Margarito could no longer be denied after his sensational victory over Miguel Cotto and Calderon just kept winning. THE RING’s junior flyweight champ is 32-0 and an astounding 16-0 in world title fights, including two in 2008.

Four of the eight retained their championships as we move into 2009: Pavlik, Hatton, Vazquez and Calderon. Champions crowned in 2008 were: Tomasz Adamek (cruiserweight), Calzaghe (light heavyweight) and Juan Manuel Marquez (lightweight).

Only seven divisions currently have champions.

Here’s a look at significant movement in some of the weight classes:

Heavyweight: Wladimir Klitschko held onto No.1 and his brother, Vitali Klitschko, came out of retirement to destroy Samuel Peter and claim No. 2. No American is in the current Top 10.

Super middleweight: Calzaghe vacated his throne. Jermain Taylor entered the Top 10 with an easy victory over Jeff Lacy, who dropped out of the ratings.

Middleweight: Pavlik remained champ but lost his perfect record and a lot of respect when he was embarrassed by Hopkins. Wright dropped out because of inactivity, while Arthur Abraham solidified his role as the biggest threat to Pavlik.

Lightweight: Marquez beat Casamayor for the championship in his first fight at 135 pounds. Nate Campbell claimed the No. 1 spot when he beat Juan Diaz.

Junior lightweight: The top three, Pacquiao, Marquez and Joan Guzman, all moved up to 135 (and higher). Edwin Valero became No. 1 spot but also plans to move up.

Junior featherweight: Juan Manuel Lopez broke into the ratings with a one-round KO of Daniel Ponce DeLeon (No. 4 last December).

Junior bantamweight: Martin Castillo (No. 1 last December) lost to Fernando Montiel and retired. Vic Darchinyan exploded into rankings with KOs of Cristian Mijares (No. 4 last December) and Dimitri Kirilov (No. 8 last December). Darchiyan is now No. 1.

THE FINAL POUND-FOR-POUND RATINGS OF 2007

THE FINAL POUND-FOR-POUND RATINGS OF 2008