100 years since Jack Johnson made history 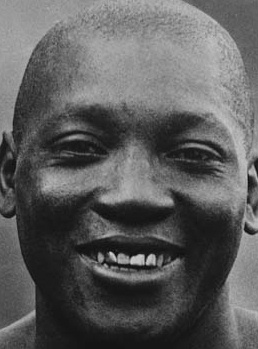 Jack Johnson made history by stopping Tommy Burns to win the heavyweight championship in 1908. Photo / THE RING

This is Part I of a two-part series. Tomorrow: The dwindling number of African-Americans in boxing.

Jack Johnson exists today only on the periphery of our consciousness, a place the first black heavyweight champion would no doubt abhor if he were alive.

In his day, however, no figure in sports was more important than the son of slaves from Galveston, Texas. He was an outspoken, independent-thinking African-American man who refused to subscribe to social parameters in a time that didn’t allow blacks such liberties.

He did as he pleased. And that included following white heavyweight champion Tommy Burns of Canada around the world in attempt to lure him into the ring. He finally did so in Sydney, Australia on Dec. 26, 1908 – 100 years ago last Friday.

The fight wasn’t much of a fight at all. Johnson pummeled Burns for 14 rounds before police intervened to stop the carnage. The 6-foot-1¾, 192-pound Johnson openly mocked Burns, who yelled back at Johnson to “fight like a white man.” Johnson just flashed his gold-toothed grin, further irritating the 5-7, 175-pound Burns and the 20,000 whites sitting at ringside.

The fight was so lopsided, the filming of it was stopped so it wouldn’t depict the demise of a white man at the able hands of an African-American.

Thus, Johnson claimed a title – world heavyweight champion – that was thought to be the white man’s domain almost 40 years before Jackie Robinson broke the color barrier in Major League Baseball. The victory also kicked off one of the ugliest campaigns in American sports history, the search for the “Great White Hope.”

But does Jack Johnson get his due today? Have we forgotten “The Galveston Giant”?

The Ken Burns documentary “Unforgivable Blackness,” which appeared on PBS in 2005, did a wonderful job of telling Johnson’s story, but the anniversary of the Johnson-Burns fight came and went without a mention in the mainstream media.

“We should appreciate Jack Johnson more, but society and history doesn’t appreciate him,” said Bernard Hopkins, who will undoubtedly join Johnson one day in the International Boxing Hall of Fame. “It all started somewhere, and it started with Jack Johnson beating (Tommy Burns) for the heavyweight championship. It amazes me that baseball and football people don’t know and don’t care about Jack Johnson.

Johnson came along during a time when black men were lynched for even looking at a white woman. Johnson married them.

And he paid a price, becoming the target of passionate racial hatred. Ultimately, after he beat Jim Jeffries in 1910, he was convicted of trumped up charges of transporting a woman over state lines for immoral purposes and sentenced to prison. He escaped to Europe but returned to spend time in behind bars.

“If you don’t show appreciation for this man, you ignore history,” Hopkins said. “We can’t do that. We all know Jack Johnson. I am the modern Jack Johnson. The only thing missing is that I don’t have a white woman by my side. I speak my mind. I believe in my principles and no one is going to tell me what to do. History has to be repeated for life to move forward. History is a blueprint for what’s to come. Jim Brown was an original. Muhammad Ali was an original. Jack Johnson was an original.

“Jack Johnson was the first boxing gangster that ever lived. He knew how society felt back then about a black man with a white woman, and he still did it anyway. ÔÇª They’d hang you for that. They tried to get him with kidnapping, crossing state lines with white women. The government had to come after the man – and all because he was a black man who was heavyweight champion.”

Chad Dawson, IBF light heavyweight titlist, said he’s still learning about the first black heavyweight champion but is aware that if there wasn’t a Jack Johnson, there might not be a Chad Dawson, or a Bernard Hopkins, or any African-American champion.

“We do owe Jack Johnson a lot,” Dawson said. “Fighters can’t do today what Jack Johnson did. He lived a faster life than he fought. I remember seeing him in clips with what looked like little rags on their hands. I wouldn’t be able to live in his time. That would have been impossible. It’s really sad to know all the things Jack Johnson had to go through. I can’t imagine people being that ignorant, with the way he was depicted as an animal, an ape. It had to get to him after a while. I don’t know if I would be that tolerant.”

HBO ringside analyst Larry Merchant puts Johnson in a class with John L. Sullivan, Jack Dempsey, Louis and Ali. They were all fighters who transcended boxing – and in many ways sports.

“Johnson was definitely a mythic figure,” Merchant said. “Obviously, Johnson winning the championship had real social significance. It didn’t help black fighters immediately. There was still prejudice in society that prevented black fighters from getting the exposure they deserved. And there was such a furor of a black guy winning the heavyweight championship that it wasn’t until 30 years that another black fighter, Joe Louis, would get a chance again. But in a way, Jack Johnson was far ahead of his time. Muhammad Ali used to say, ‘If you think I’m crazy, Jack Johnson was really crazy.’ Johnson was an important figure in boxing and social history.”

Hall of Fame trainer Emanuel Steward appreciates Johnson’s contributions as much as anyone.

At the same time, Steward said the pioneer was hardly a saint. On the contrary, he said, Johnson did as he pleased without regard to consequences even if people were hurt along the way.

“That’s a very, very complex topic,” Steward said. “Johnson started up a lot of good things and a lot of wrong things too. Historians like to go on about all the injustice that went on in his life. And there was. But Johnson did a lot of things that were self-serving, never to the betterment of boxing or the relationship between races.

“What Jack started created so much drama. It’s something people still marvel about. I’m not as excited about his boxing accomplishments as I am his social accomplishments. He had a relaxing and controlling style. But he beat these small guys, like Tommy Burns, and beating Stanley Ketchel, a middleweight, and fighting a man they brought back, James Jeffries, and humiliated him. That today wouldn’t make him world-class.

“He brought a lot of pain to not only white people, but to black people,” Steward continued. “He was a man who cared only about himself, not what blacks were going through at that time. He never gave some of the great black heavyweights of that time, like Sam Langford, the same chance he received. I’m not going to take away the influence he has had over so many people, and the racial things he had to overcome. That’s amazing. His boxing accomplishments, to me, weren’t super phenomenal.”

Johnson used a deliberate, patient style of counter punching and defense to win. He was widely criticized by sportswriters – white sportswriters – for using this approach, yet it was the same style that former heavyweight world champion “Gentleman” Jim Corbett used so effectively. Johnson used to take great delight in punishing his opponents, while always seemingly holding something in reserve. When he wanted to, he could put his foot down and end a fight.

Against Burns, Johnson kept slamming him with head-snapping shots. He’d land a combination, force Burns to teeter, and then tie him up to keep Burns on his feet so he could punish him some more. This went on for 14 rounds.

Johnson was that dominating.

“Jack Johnson should be a greater part of our consciousness,” said Steve Farhood, Showtime boxing analyst. “You hear the term, ‘ahead of your time.’ Jack Johnson was a half century, if not an entire century ahead of his time. Jack Johnson won the heavyweight title almost 40 years ahead of Jackie Robinson breaking the color line in Major League Baseball. He seemed to take great delight in enraging white America at the time with his accomplishments. But there is a tendency to forget how good he was, because of the social and political ramifications of what he did. I don’t think Jack Johnson is forgotten.”

So when we look back, it seems almost incongruous to place Jack Johnson in 1908. He seems to belong in this time, with the modern-day athlete. He was the ultimate symbol of individual will and wasn’t afraid to let everyone know it.

“That’s why I say Jack Johnson had no blueprint; he created his own,” Hopkins said. “My blueprint coming up was Marvelous Marvin Hagler. Jack had no blueprint. We have great champions, but Jack Johnson was an icon, and there aren’t too many people who can say that they are icons. He was, whether people want to him remember or not.”