Fan Polls: Round of the Year 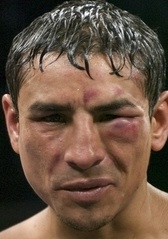 ROUND OF THE YEAR VOTING RESULTS

Note: These are not the official RING awards. Those will be announced on Jan. 27 in the magazine.

In three unforgettable fights over the past two years, Mexican brawlers Israel Vazquez and Rafael Marquez have provided about a dozen rounds that compare favorably to any three-minute period in recent years.

Round 4 of their third fight, on March 1 in Carson, Calif., was among the most entertaining.

The fighters, vying for Vazquez’s RING super bantamweight world championship, provided plenty of give-and-take action in the first three rounds. That set up Round 4, a microcosm of their wonderful trilogy.

The high drama started with a left-right combination by Marquez that rocked Vazquez with about a minute to go in the round. Then, with the fighters furiously exchanging punches, Marquez landed a hard right that put Vazquez on his pants.

“Down goes Vazquez!” Showtime announcer Steve Albert screamed as the crowd went wild. “Vazquez down for the first time in the trilogy.”

He wasn’t down long and quickly turned the tide in his favor. Moments after fighting resumed, with Marquez bent on finishing what he started, Vazquez landed two hard rights that buckled the knees of his rival.

“Marquez did the wrong thing and paid for it!” analyst Al Bernstein yelled. “He went after Vazquez!”

Then, as they once again traded punch for punch as time wound down in the round, it was Marquez’s turn again. The brother of Juan Manuel Marquez landed a flurry of lefts and rights and then a big right that buckled Vazquez’s knees with seven seconds to go.

“Vazquez is in trouble!” Albert said over the din of the crowd. “He buckled!”

And then, after a few more wild punches, it was over, lifting an appreciative crowd to its feet.

“Oh, my goodness, what a round!” Albert yelled amid the cheering.

Indeed. One minute of one round that provided an entire fight's worth of thrills.

The result of the 12-rounder was not unexpected, a split-decision. It could’ve gone either way but it was Vazquez who came out on top to retain his world title and WBC belt.

The true winners, though, were the fans.

Do we hear Vazquez-Marquez IV?